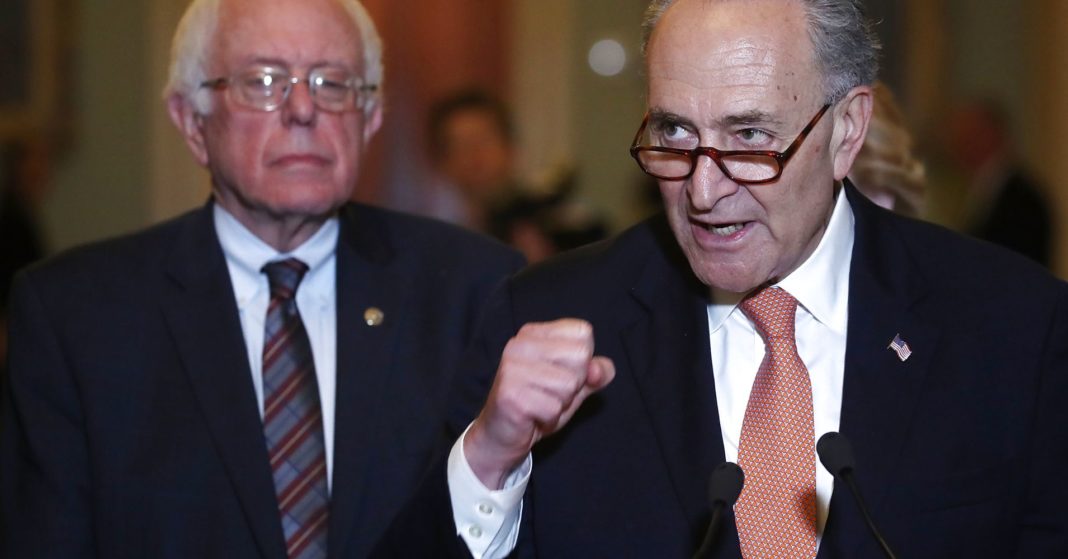 Senate liberals are proposing legislation that would prevent companies from buying back their own shares unless they first pay workers at least $15 an hour and offer paid time off and health benefits.

Senate Democratic leader Charles Schumer of New York and Sen. Bernie Sanders of Vermont outlined their plan in a New York Times op-ed published Sunday. The proposal would slap “preconditions” on a company’s ability to buy its own shares.

“Our legislation would set minimum requirements for corporate investment in workers and the long-term strength of the company as a precondition for a corporation entering into a share buyback plan. The goal is to curtail the overreliance on buybacks while also incentivizing the productive investment of corporate capital,” they wrote.

Last year, more than $1 trillion in buybacks were announced by large companies after a corporate tax cut pushed through Washington in late 2017 left companies with a lot of extra cash to spend. But instead of significantly raising worker pay or investing in equipment, companies mostly used the cash to buy their stock. And some large companies are buying back billions of dollars of shares while announcing layoffs and factory and story closings, the senators wrote.

For example, Walmart announced a $20 billion share buyback while it was laying off hundreds and closing Sams Club stores. The column cites a Roosevelt Institute analysis that the retailer could have used the money instead to raise hourly wages to $15.

Harley-Davidson is buying back 15 million shares while closing a plant in Kansas City, Mo., Wells Fargo spent billions of dollars on buybacks while “openly plotting” to cut 10 percent of its workforce, the senators said.

“At a time of huge income and wealth inequality, Americans should be outraged that these profitable corporations are laying off workers while spending billions of dollars to boost their stock’s value to further enrich the wealthy few,” the senators said.

“I wish some economist would go and talk to these guys on how buybacks work,” Hassett said Monday on CNBC’s “Squawk Box.” “It’s very disappointing that over and over again I see the Democrats pursue really economically illiterate proposals just because they think they sound good politically.”

It isn’t the first time a ban on corporate stock buybacks has been floated. Last year, Sen. Tammy Baldwin, D-Wis., sought to ban stock buybacks as open market purchases, using the same argument that they have contributed to economic inequality and divert resources away from workers.

Last June, more than a dozen lawmakers, including Schumer and Baldwin, wrote to Securities and Exchange Commission Chairman Jay Clayton urging him to open public comments on the rules for stock buybacks, which they said hadn’t been updated in over a decade. They cited a Brookings Institute study that found from 2004 to 2014, the largest U.S. companies spent 51 percent of profit on buybacks.

Sanders, I-Vt., is exploring another bid for the Democratic presidential nomination.