Chris Collins once touted his business ties to get elected. Now they may derail his political career 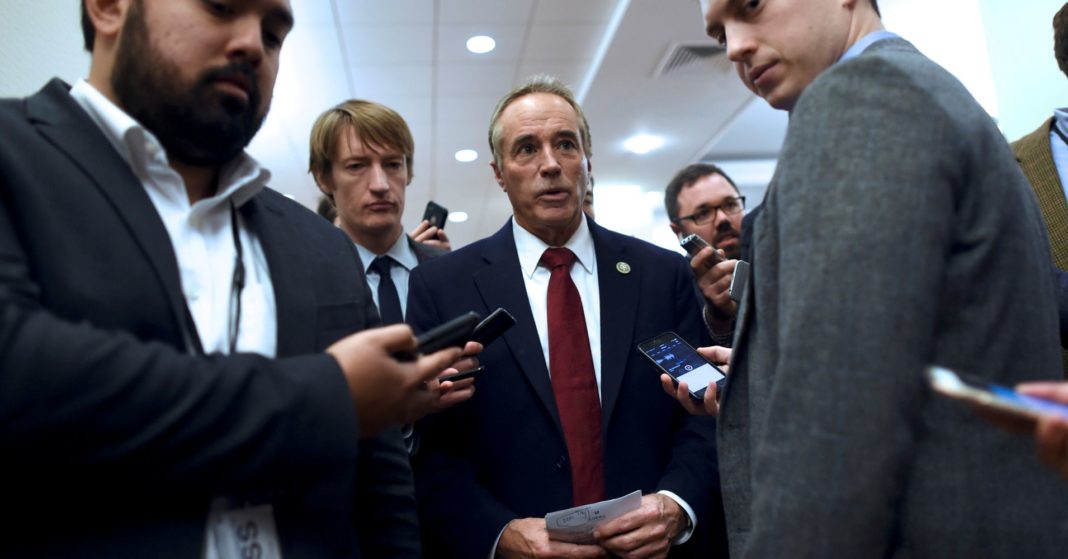 From the beginning, Chris Collins’ career in politics was defined by his credentials as a rich businessman.

Now the New York Republican’s business interests have dashed his political ambitions. His ties to an Australian biotechnology company have sparked investigations from government watchdogs, lodged insider trading charges against him and his 25-year-old son, gotten him arrested and, most recently, torpedoed his Congressional re-election campaign.

Collins boasts more than three decades as a “successful small businessman,” according to his official website, beginning as an employee of Westinghouse Electric in 1972 and founding his first company in 1983.

In his first, failed bid for Congress in 1998, Collins made headlines for outspending his opponent, longstanding incumbent Democrat John LaFalce, by hundreds of thousands of dollars. He campaigned on his business credentials in a winning local government race in 2007.

When he was eventually elected to to the House of Representatives in 2012, Collins immediately became one of the 10 richest lawmakers, with an average net worth of nearly $60 million, according to Ballotpedia, citing data from political contributions database OpenSecrets.

On Wednesday, the Republican congressman from a Trump-friendly Buffalo-area New York district found his business career in the spotlight once again, when he was indicted and arrested on insider trading charges by federal authorities in Manhattan.

A top stakeholder and board member in drug company Innate Immunotherapeutics, Collins was accused of funneling nonpublic information about a failed drug trial to his son before the company announced it publicly. Collins’ son, Cameron, who was also charged in the indictment, allegedly acted on that heads-up, selling nearly 1.4 million shares just days before the company’s stock dropped more than 92 percent on the news.

The congressman’s actions, prosecutors charge, helped numerous defendants and other co-conspirators avoid losing about $768,000 on the shares.

Collins and his son, along with the father of his son’s fiancee, pleaded not guilty to all charges brought against them by federal officers in Manhattan. Up until his reversal on Saturday, when he ended his reelection campaign, Collins had vowed to continue the fight to keep his seat in Congress.

The indictment shed new light on the intertwined relationship between Collins’ life as a businessman and his duties as a publicly elected representative.

Coming to Congress with decades of private sector experience under his belt, it was no surprise that Collins landed a spot on the Small Business Committee, which was chaired by Rep. Sam Graves, R-Mo., at the time.

However, the freshman lawmaker was also appointed chairman of the Subcommittee on Health Care and Technology — even though he was serving on the board of Innate, whose business can be affected by health care legislation passed by Congress.

A senior congressional aide, who declined to be named, told CNBC that Collins was approached to lead the subcommittee before his ties to Innate were known.

Collins’ appointment, even as an incoming congressman, was not unusual for that committee, the aide said. In such a large committee with such little legislative jurisdiction, the aide said the people matching members with subcommittees were “grasping at straws sometimes to fill some of these roles.”

A Buffalo News report at the time quoted Collins saying, “I didn’t ask [Graves] why” he was picked.

David Chase, a former prosecutor with the Securities and Exchange Commission in Miami until 1999, said that members of Congress on company boards have to be careful about conflicts of interest.

“He has to make sure he was not doing something on the business side that would affect his duties as an elected official,” Chase said. Asked whether leading a health care subcommittee while serving as a drug company’s board member made those two things more difficult to separate, Chase said, “It gets a hell of a lot closer, doesn’t it?”

The number of U.S. lawmakers who own stock more than doubled from 2001 to 2013, to the point where more than half of Congress holds shares in companies, according to the Harvard Business Review.

Separate figures suggest that the more representatives invest in a particular stock, the less that company’s lobbyists spend in Washington.

In a Daily Beast report from April 2017, Simon Wilkinson, CEO of the company that would become Innate, said he met Collins in 2005 while looking for investors in the U.S. Collins invested $5 million in the company, the publication reported.

“The Company and its directors/officers (excepting Mr. Collins) are not under investigation,” Innate said in a statement. The company also noted that “it has cooperated fully with requests for information made to it” by the Securities and Exchange Commission. The agency filed a civil complaint against the same three defendants in the federal criminal case, and added related charges against Cameron Collins’ fiancee, Lauren Zarsky, and her mother, Dorothy Zarsky.

Wilkinson told CNBC in an email that “we consider this to be a private matter involving Mr. Collins and we will not be putting out further commentary at this time.”

In January 2017, Innate was found to have offered both Collins and Georgia Rep. Tom Price, who would go on to be President Donald Trump’s Health and Human Services secretary, a discounted stock price in order to help fund the trial for its multiple sclerosis drug. That ultimately wound up a failure, and the company sold both Price and Collins nearly $1 million in discounted shares, according to an investigation from Kaiser Health News.

During his confirmation hearings in January 2017, Price was grilled by lawmakers about a tip on the company he allegedly received from Collins. Price resigned last September, following an embarrassing series of news stories detailing his use of pricey commercial and charter jet travel during his brief tenure as HHS chief.

Collins, too, felt the political consequences for his dealings with Innate long before he was charged. Revelations about the biotech company sparked a watchdog investigation from the Office of Congressional Ethics, which handed the reins of that probe to the House Ethics Committee in October 2017. The OCE found “substantial reason to believe” that Collins violated congressional rules.

In the wake of Collins’ indictment and arrest Wednesday, House Speaker Paul Ryan, R-Wis., said the New York lawmaker would be booted from the House Energy and Commerce Committee.

Just this week, Collins insisted he would still stand for re-election during the midterms, where the GOP is already facing stiff headwinds. “Rest assured that I will continue to work hard for the people of the 27th Congressional District of New York while remaining on the ballot for reelection this November,” he said in a statement to supporters.

Less than four days later, he changed his mind. “After extensive discussions with my family and my friends over the last few days, I have decided that it is in the best interests of the constituents of NY-27, the Republican Party and President Trump’s agenda for me to suspend my campaign for re-election to Congress,” Collins said.

Now that he’s given up on holding his seat in Congress, the entrepreneur-cum-lawmaker who once allegedly boasted in a phone call about “how many millionaires I’ve made in Buffalo” must now work to salvage his business reputation, and potentially his freedom.