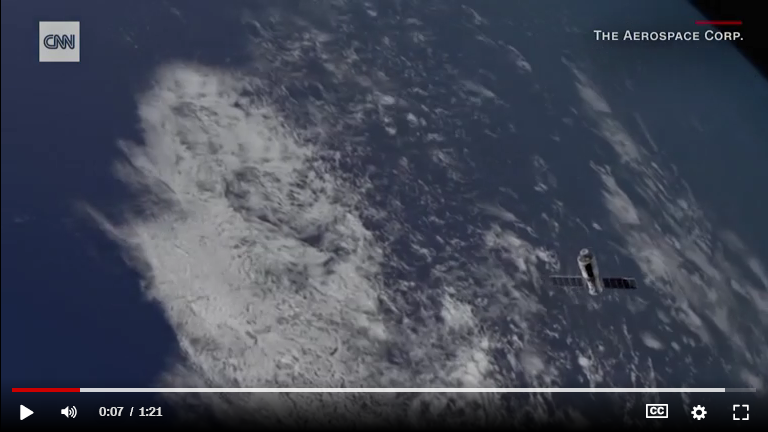 A Chinese space lab could plummet back to earth as early as Saturday, authorities say, in a fiery end to one of the country’s highest profile space projects.

The 40-foot long Tiangong-1 or “Heavenly Palace,” is expected to re-enter the Earth’s atmosphere between March 31 and April 1, according to the latest update from the European Space Agency.
The China Manned Space Engineering Office places the date of reentry a little later, between April 1 and April 2. Earlier estimates put the date as late as April 4.
Scientists have emphasized the danger of being hit by falling debris is tiny, as low as one in 1 trillion, as the structure is likely to burn up in the atmosphere during reentry.
“There is no need for people to worry about its re-entry into the atmosphere,” an article by the China Manned Space Engineering Office published on state media said.
“It won’t crash to the Earth fiercely, as in sci-fi movie scenarios, but will look more like a shower of meteors.”
The Tiangong-1 was launched in September 2011 as a prototype for China’s ultimate space goal: a permanent space station which is expected to launch around 2022.
But the Chinese government told the United Nations in May 2017 their space lab had “ceased functioning” in March 2016, without saying exactly why.
As of Thursday, the space lab is orbiting the Earth at a height of 196.4 kilometers (122 miles).
Although the incident has been embarrassing for the China’s space program, it hasn’t delayed its progress. In September 2016 the Tiangong-2 space lab was successfully launched and put into orbit. 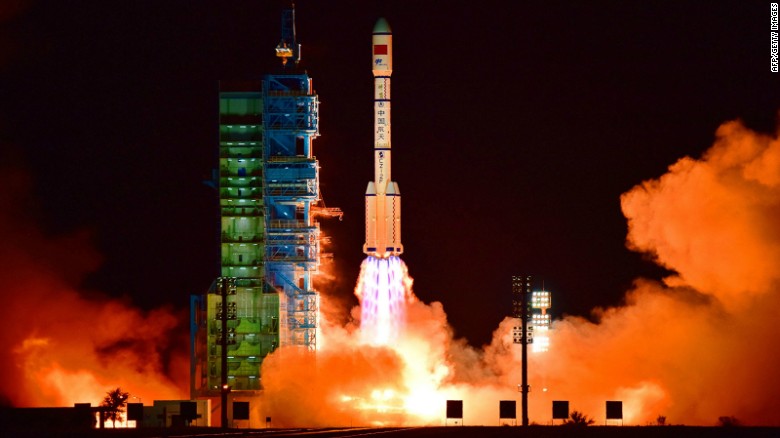 China’s Tiangong 2 space lab is launched on a Long March-2F rocket from the Jiuquan Satellite Launch Center in the Gobi Desert.

Witnesses may see ‘series of fireballs’

Markus Dolensky, technical director of the International Center for Radio Astronomy Research in Australia, said witnesses to the Tiangong-1 descent should see “series of fireballs” streaking across the sky — provided there were no clouds.
“It is now nearing its fiery demise as it gradually gets slowed down by the fringes of the Earth’s upper atmosphere,” he said.
While it is not uncommon for debris such as satellites or spent rocket stages to fall to Earth, large vessels capable of supporting human life are rarer.
Nasa’s first space station, Skylab, fell to Earth in an out-of-control reentry in 1979, burning up harmlessly in the process.
The last space outpost to drop was Russia’s 135-ton Mir station in 2001, which made a controlled landing with most parts breaking up in the atmosphere.
The re-entry latitude of the Tiangong-1 is expected to be within 43 degrees north and 43 degrees south of the equator, a huge swath of the earth which stretches from New York to Cape Town. Scientists say it’s not possible to be more specific about exactly where it will come down.
“Some parts of the upper atmosphere are thicker than others meaning the craft slows unpredictably and since it travels around the Earth in just 90 minutes even an uncertainty of a two minutes means the craft could fall anywhere along a 1,000 kilometer track,” Alan Duffy, a research fellow in the Center for Astrophysics and Supercomputing at Swinburne University of Technology in Australia, said.
Share
Facebook
Twitter
WhatsApp
Pinterest
Linkedin
ReddIt
Email
Print
Tumblr
Telegram
Mix
VK
Digg
LINE
Viber
Naver
Previous articleRussia expels US diplomats and shuts consulate in tit-for-tat move
Next articleShelling ‘kills Palestinian’ in Gaza