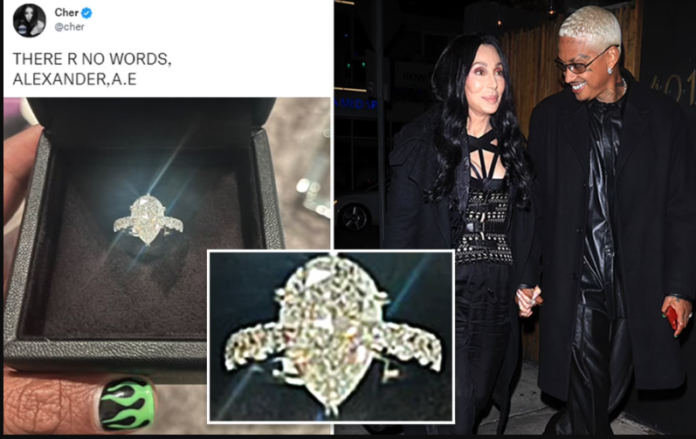 Music icon, 76, Cher, has sparked rumours that she has gotten engaged to her 36-year-old boyfriend over the Christmas holiday.

Cher shared a photo to Twitter on Christmas morning of what appeared to be a diamond engagement ring being held by her new beau, Alexander ‘AE’ Edwards.  She captioned the image: ‘THERE R NO WORDS, ALEXANDER,A.E’

AE, a music executive, was holding the box with two fingers that featured painted nails of black lacquer with lime green flames.

Cher’s followers immediately started responding with questions about the ring’s meaning and if wedding bells were in the future.

In response, the Believe singer simply re-posted the same image an hour later with a different, cryptic caption.

‘I posted this cause his nails are so cool,’ she said by way of explanation but failed to dispel the engagement rumors.

The mysterious ring comes after sources recently told RadarOnline that the superstar was smitten with AE and wanted to tie the knot.

‘Cher is head over heels in love,’ the insider revealed. ‘She knows she doesn’t have much time left anymore to find ‘the one’ and after two failed marriages and countless disastrous boyfriends, this could be her LAST chance and she isn’t going to let it pass her by.’

The added: ‘Of course, her friends are worried. Whenever there is a 40-year-old and $400 million gap between two people, you have concerns!’

AE is the ex-boyfriend of Amber Rose, 39.  Cher confirmed on Instagram last month that she is dating Alexander.