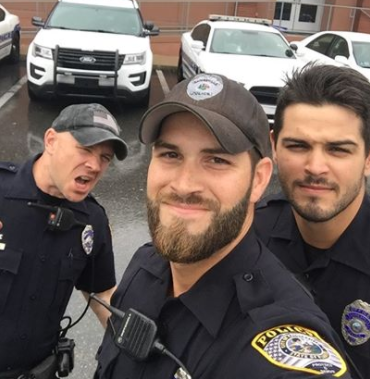 Gainesville Police Department took to their Facebook page to share photos of three of their officers getting ready for their night shift following Hurricane Irma.

They captioned it: “Officers Nordman, Hamill and Rengering…part of the night crew getting ready to do some work. #Irma”

The male officers are so good-looking that women went crazy in the comment section. Most of the comments were extremely hilarious.

One commenter wrote: “Lord whatever they fixing, mine is broke! Whatever they finding… mine is lost! If it’s a crime I can tell them who did it come on!!! I’m in California but they can help me a lot too.”

Following the crazy comments, Gainesville Police Department in Florida posted a very amusing update addressing the women who are going crazy over their officers.

UPDATE:
1. We are dying with the comments. You’ve actually made our chief blush with some of them.
2. MRS. Nordman and MRS. Hamill have also enjoyed knowing how millions of women are going crazy over their husbands.
3. We can confirm that Officer Rengering (far right with the amazing hair) IS SINGLE.
4. On another note, Officer Rengering is being placed into Cougar Prey Protective Care, similar to the witness protection program for his safety.
5. Please do not call 9-1-1 and request this group respond to your “incident”
6. There WILL be a calendar.

Thank you all for the hilarious comments…they have brightened our time up here. As for the calendar, we are going to try and do something fairly quickly and funds raised will go to Hurricane Irma recovery here in Florida. See all the hilarious exchanges below.