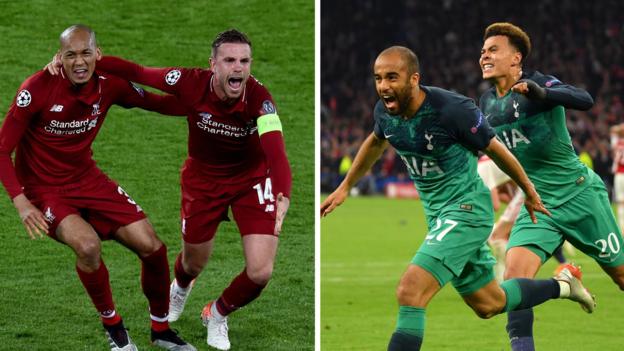 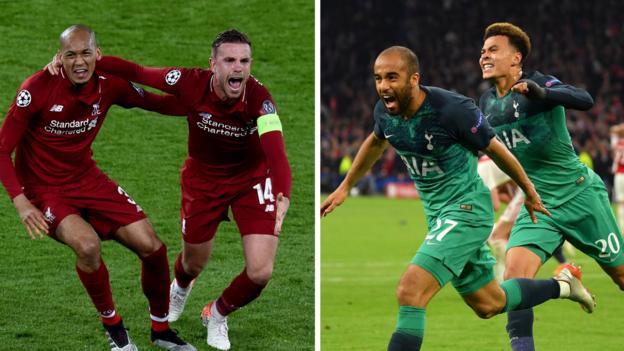 Liverpool overturned a 3-0 first-leg deficit against Barcelona with an unimaginable 4-0 victory at Anfield to reach Saturday’s Champions League final.

Tottenham pulled off their own great escape in Amsterdam, going 2-0 down on the night and trailing 3-0 on aggregate, only to go through to the final courtesy of a remarkable second-half hat-trick from Lucas Moura.

The prospects are not good for Liverpool going into the second leg. Trailing 3-0 down after the trip to Barcelona, they are without strikers Mohamed Salah and Roberto Firmino.

Klopp: “The feeling was it was impossible but of course it was not over yet.

“I loved that game in Barcelona. We lost 3-0 and it was so strange because I couldn’t get it. I didn’t feel the result. Usually the result is the result of the performance but it was not the case. I don’t think we should have won but I think it was a smaller result.

“We knew we had a chance but we wouldn’t go out and tell the world that.

“I said we have to try but not with the intensity where we have to score after four minutes. We have to be at our peak to have a chance. I told them to play the best football they could and they did.

“When you play against teams like Barcelona you can forget to play football by yourself because the pressure is so high – they’re coming from left and right and behind and in front.

“I was so happy in the first leg; we really played football. We had to do it in the second leg as well.”

Liverpool start the game with intensity, epitomised when Andy Robertson has a minor altercation with Lionel Messi and Jordan Henderson gets involved.

Klopp: “We were chomping at them – it looked like we were ready. We were jumping like lions. We all admire Lionel Messi but it is not about finding new friends in a football game. We are proper competitors and that is the only reason we are here now.

“People say you need an early goal in a situation like this. It helps but it is not the key. If you score the first goal in the 60th minute, you have 30 minutes to score three goals which is more than enough, unless you do not feel it is possible.

“It helps that you constantly have this positive sound level around you. Whatever you do gets pushed on another level from the stands and nobody can explain that but you feel like you are ready to do special things. I knew we were not scared.”

Liverpool lead 1-0 on the night at half-time, through Divock Origi’s goal. But there is more disruption as Robertson comes off injured, replaced by Georginio Wijnaldum, who would score two goals within 11 minutes after the break to make it 3-3 on aggregate.

Klopp: “One of the best left-backs in the world goes out. Nobody thought ‘it’s not possible’. In the moment it was only solution-orientated.

“Players have their own brain. Everyone trusted them 100%. It means (James) Milner at left-back, Gini in and one of my best substitutions I ever made… and I was forced to do it.

“I was completely in a controlled mood because I did everything I could before the game and the boys didn’t need my help. They were flying. It was calm at half-time and it was all on a plate.

“With the third goal I think everybody thought ‘now it’s possible’. From there I was happy with the result; anything that happens now is bonus. We didn’t go nuts and leave everything open.”

The fourth and decisive goal comes when Trent Alexander-Arnold spots the Barcelona defence napping and takes a quick corner from the right for Origi to score.

Klopp: “I wanted to bring on Joe Gomes so I was talking to him and I saw the ball flying in. I had no idea how it happened. Looking back at it looked like it was meant to be, yeah?

“I love giving all the respect to Trent and all the praise to Trent. It was his idea… and to Div Origi, because not only the taker gets in the mood where he takes the ball and treats it like a wonderful woman – that’s OK – but Origi in that position could miss completely the circumstances around him.

“The guys in the middle usually take a breath and are looking for position, wondering what routine we will use. And these two guys… he was ready for that ball and that’s the only reason Trent could see it and why he took it. That’s all educated in the streets of Liverpool.

“We put a lot of focus on set-pieces. We try to use quick set-pieces but to do it that quick and seeing that one player and hitting it with the right strength, it made life difficult for Divock because it bounced, and you still have to hit it.”

Liverpool see out the last 10 minutes of the game to complete one of the greatest Champions League comebacks in history.

Klopp: “I was really happy and it was unbelievable but I wanted to show my respect because losing a game like this as Barcelona coach is not too nice. The world is not too nice to managers if we lose big games, so I really wanted to show him (Ernesto Valverde) some respect for the incredible job he was doing.

“Then I went on to the pitch and shook hands with the players and the referee. I went in and had a little speech and I was so proud to be a part of a historic night. We wanted to create stories to tell our grandchildren so it was really nice. It was not just the result but it was the performance.

“In the game I was full of energy and then it’s through the press work and you get a little knock.

“When I got home my boys were in and were on fire. I went through the messages I got; it was a game where the football world showed respect. I had a feeling everyone had tried to get my number and wrote me a message. I read a few of them and went to bed.

“The game was special. It was unbelievable. I’ve seen a lot of games and it was one of the best I ever saw for different reasons. I don’t feel pride a lot of times in my life. It was so special.”

Spurs, like Liverpool, did not enter the game with ideal preparations. Coming off a three-game losing run, including the 1-0 defeat in the first leg, they were also without striker Harry Kane.

Pochettino: “We knew when we flew to Amsterdam the team would be ready to fight. We are not affected because we lost three games. Everything was in a good way before Ajax. The belief was unbelievable and the energy was amazing.

“The football and tactics are so important – the game plan. And of course the psychology – the mental side – is so important in a team. We were working on both ways to prepare. And you need some luck.

“The priority was to be strong and relay the idea that it’s 90 or 95 minutes. Liverpool against Barcelona helped us to realise what is possible – we watched it, of course. And our quarter-final game against Manchester City helped us to build a strong mentality and to never give up.

Ajax score early from a corner to make it 2-0 on aggregate, with Kieran Trippier receiving much of the blame for losing goalscorer Matthijs de Ligt.

Pochettino: “It is football and that can happen. We knew about De Ligt at corners and we worked on that.

“Football is always about mistakes. It is difficult to affect it from outside, other than to say ‘come on, calm, play in the same way’. It’s so easy to say it but to apply it is difficult for the players.”

After 35 minutes Hakim Ziyech adds Ajax’s second on the night and third on aggregate. Half-time and Spurs are reeling. Pochettino has to give the team talk of his life. Some players recall Harry Kane giving an impassioned half-time speech too.

Pochettino: “When I entered the dressing room all the eyes are on you. You can feel the tension. When the result is positive they try to find answers.

“In that moment you decide the approach. Sometimes you are relaxed. Sometimes you are aggressive. We showed a few clips about offensive and defensive situations and we said ‘we are alive, when we score one we will be in the game and we will translate the fears and bad feelings on to them’.

Fernando Llorente replaces Victor Wanyama and the second half begins.

Pochettino: “The second half the team is alive. We are going to try and force them to make a mistake.

“We need to give credit to Lucas Moura, but we need to give him more credit – we say about my team talk or Harry Kane’s team talk but Lucas has scored three unbelievable goals and without Lucas Moura you are not going to change anything.”

The first of those goals comes in the 55th minute. Four minutes later, Moura has his second. Then, with six minutes of injury time played, Dele Alli cushions a ball into the path of Moura…

Pochettino: “I don’t know if the ball was meant for Lucas. Danny Rose told me after, ‘gaffer, do you think the ball from Dele was for Lucas or for Fernando Llorente?’ I said ‘it was for Lucas’.

“‘No way’, he said. That was Danny Rose’s opinion. I said ‘no, it was a great touch’. Football sometimes is magic. It’s amazing.”

Moura slots it in. Spurs are on the brink of winning the game on away goals. Cue pandemonium. Pochettino’s tears flow, he drops to his knees, the top button of his shirt bursts open.

Pochettino: “I lost my head. In that moment I thought the game was finished. All the Ajax players were down on the pitch and I believe the game is finished. There’s one minute more – ‘Fernando, go to centre-back – defend!’. It was crazy.

“I think the shirt, tie and trousers is for a museum. I’ve made a new suit for the final because it was destroyed.

“I spoke to the Ajax manager (Erik ten Hag). It’s difficult to say something in that moment. How Ajax celebrated the first and second goal, the celebration was like ‘done, we are in the final’.

“What are you going to say to someone who believes they have something but it disappears in one second? It’s not easy to say I feel sorry. I don’t feel sorry because I want to win. It’s only ‘good luck and all the best for the future’.

“In your mind there are a lot of emotions and memories. In that moment you cannot keep it inside. Of course I bring the tears.

“I went to my hotel room, had a shower – in the shower I’m thinking a lot about what happened. It was my first moment alone where I realised what we achieved.

“I had no tears. It was a moment to feel the happiness.”