Champions League 2018-19: The greatest tournament ever? 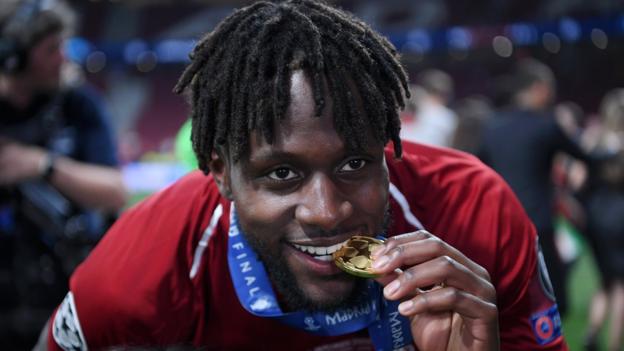 Liverpool beat Tottenham 2-0 in Madrid to bring to an end a sensational Champions League season.

With dramatic comebacks, an all-English final, a wonderful Ajax team and some unlikely heroes, it is a season which will live long in the memory.

BBC Sport looks at some of the season’s highlights, including some brilliant pictures from earlier rounds.

There had been so many great comebacks in the previous couple of Champions League seasons that it would be easy to become numb to the very concept.

But this season’s knockout games raised the bar, with Ajax, Manchester United and Juventus improbably turning around first-leg deficits, and then Liverpool and Spurs famously fighting back to reach the final.

First of all in the last 16, Ajax overturned a 2-1 first-leg defeat at home to champions Real Madrid to win 4-1 at the Bernabeu and 5-3 on aggregate.

It was a result that sent shockwaves through Europe, ending Real’s 1,011-day reign as European champions and costing Santiago Solari his job.

The following day, Manchester United caused another shock. They lost 2-0 to Paris St-Germain in the first leg at Old Trafford and looked destined for a European exit.

At that stage, statisticians Gracenote calculated United had a 5% chance of progressing – which was better than Ajax’s 4% a day earlier.

They led 2-1 going into injury-time but were still heading out until a conversional handball decision – awarded in injury-time after a pitchside video review by the referee – gave Marcus Rashford the chance to score from the spot.

The next week it was the turn of Juventus to pull off an unlikely result, after they lost 2-0 to Atletico Madrid – who host this year’s final – in their first leg in Spain.

Further progress in the competition looked a long shot in the return tie against Diego Simeone’s legendary defence, but Cristiano Ronaldo did what he does best, scoring a hat-trick that included an 86th-minute penalty, to knock Atleti out.

But then came the semis, and two nights of football that will live with many fans forever.

Liverpool were given a 4% chance of going through after losing 3-0 at the Nou Camp.

But Divock Origi (more on him later) and Georginio Wijnaldum scored twice each to send the Reds through on another famous Anfield night.

That was, remarkably, not even the most dramatic English comeback of the week.

Only 24 hours later, Tottenham did in 35 minutes what Liverpool had 90 to do, as Lucas Moura scored a second-half hat-trick, including a 96th-minute winner, in Amsterdam to knock out Ajax on away goals.

In fact, half of the 14 knockout ties this season have been won by a team given less than a one in three chance of progress after the first leg by Gracenote.

Ajax capture Europe’s hearts, Spurs come back from the brink again and again

Although their run ended in heartbreaking style at the semi-final stage, Ajax were arguably the team of the tournament.

The Dutch side reached the last four for the first time since 1997 with a squad mostly full of extraordinary young talents, alongside Dusan Tadic and Daley Blind, relatively unheralded recruits from the Premier League who cost a combined £24m.

After ending Real’s European reign in the last 16, they did the same to Ronaldo’s run of Champions League success when they knocked out his Juventus team in the quarter-finals.

Even more remarkable was the fact they had to come through three rounds of qualifiers to even make the group stages, with a Champions League campaign that ran from July 2018 to May 2019.

The sad thing for Ajax fans – and football romantics – is that this team will not get another crack at the Champions League next season.

Midfielder Frenkie de Jong has agreed to join Barcelona for £65m, with 19-year-old captain Matthijs de Ligt and Morocco winger Hakim Ziyech among the others expected to go.

Spurs’ run to the final is one that not too many people expected. The club have only won one trophy this millennium – the 2008 League Cup – and have not signed a player since January 2018.

They were on the verge of elimination five times this season, but somehow kept progressing.

Mauricio Pochettino’s side were 12 minutes away from going out in the fourth group game, until Harry Kane’s late double against PSV kept them in the race.

Then they were 10 minutes away from elimination in the next game until Christian Eriksen’s late winner against Inter Milan.

They left it even later in the final group game, with Lucas Moura’s 85th-minute equaliser against Barcelona taking them into the last 16.

And yet it was the knockout stages that took them even closer to the brink. An injury-time Raheem Sterling goal for Manchester City appeared to knock them out in the quarter-finals, before a video assistant referee review ruled that Sergio Aguero was offside and the goal was ruled out, with Spurs going through on away goals.

And they experienced even more drama in their semi-final as Moura saw them past Ajax.

Impressively, they managed both those victories without star striker Kane.

Admittedly, the two Champions League top scorers are global icons Lionel Messi and Robert Lewandowski. But some of the real legends of this season’s competition have caught everyone by surprise.

Show us a person who thought in advance that Tadic, Moura or Origi would be among the most influential players in the tournament and we will show you a liar.

The Serbia forward, now 30, was a good player in his four seasons for the Saints, but no more than that, managing 24 goals in 162 games. He had passed that goalscoring figure for Ajax by February.

Tadic, who scored seven goals in 2017-18 for Southampton, scored nine in the Champions League alone for Ajax, including three in the qualifying rounds. Some of his displays, most notably at the Bernabeu, were breathtaking.

He is the Champions League’s joint third top scorer this season – with six goals as well as four assists.

One goal and two assists came in a genuinely remarkable performance in the 4-1 demolition of Real Madrid. It was a display that earned him a rare 10/10 rating from French newspaper L’Equipe.

Even more unlikely was the importance of Liverpool’s Origi. The Reds were happy to sell or loan the Belgium striker last summer but he ended up staying at Anfield.

Origi had only managed 492 minutes all season for Liverpool – although that included two dramatic Premier League winning goals against Everton and Newcastle – before their Champions League semi-final second leg against Barcelona.

With Mohamed Salah and Roberto Firmino out, Jurgen Klopp was short of choices in the forward line so started Origi, who had never previously scored a goal in the Champions League.

But the wildcard netted twice in the 4-0 second-leg win, including the winner from Trent Alexander-Arnold’s quick corner.

He even came on in Saturday’s final to score the goal to clinch Liverpool’s sixth European Cup. Three shots, three goals reads his Champions League record this season.

Tottenham have not signed a player since 31 January 2018. But their most recent signing has proved to be an excellent one, Moura joining from perennial Champions League failures Paris St-Germain.

In and out of the Spurs team last season and for portions of this campaign, Moura answered the call when Spurs needed someone to fill the centre-forward role left vacant by the injured Kane.

The Brazil forward, whose late goal against Barcelona in the group stages took them into the last 16, produced an even more remarkable intervention with that hat-trick against Ajax.

He was unfortunate to be left out of the final line-up following Kane’s return – although he did come on and have a scoring chance in Madrid.

He had never scored a European goal in his career before netting in six consecutive Champions League games this season.

That tally left him as the joint third top scorer, alongside Cristiano Ronaldo, Sergio Aguero and Tadic.

More late goals than ever before

Some 70 goals – including Origi’s in the final – have been scored in the final 10 minutes of games, more than any other season since the current format of the Champions League was brought in for 2003-04.

That is 11 more than last season’s tournament.

This season ranks joint second for last-gasp goals, with 27 scored in the 90th minute or injury time, excluding extra time. The record is the 29 scored in 2011-12.

There have been so many memorable moments – and pictures – to emerge from this season’s Champions League. Here are a selection of them…

And because this is a Champions League piece, it would not feel right to leave without photos of these two…