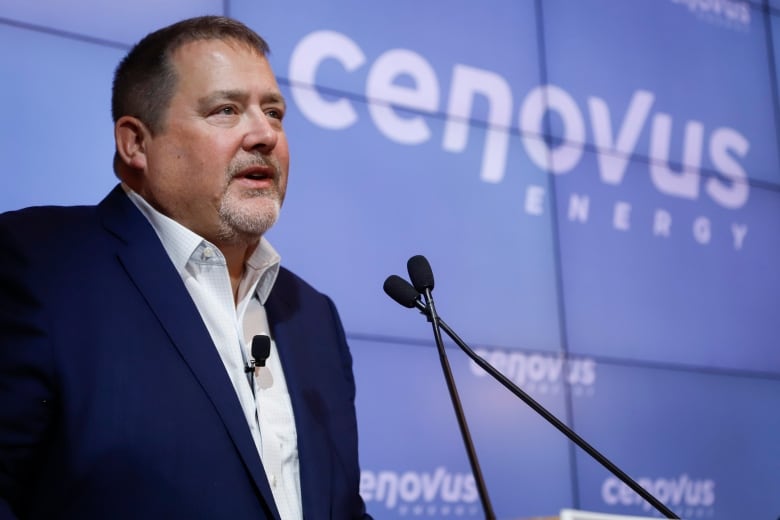 The $3.8-billion merger between Cenovus Energy and Husky Energy will result in a trimming of the workforce by as much as 25 per cent, CBC News has confirmed.

“The estimate is that the reductions will be approximately 20 per cent to 25 per cent of the combined workforce, which is about 8,600 employees and contractors,” Reg Curran, senior media advisor for Cenovus, said in an email to CBC News on Tuesday, two days after the merger was announced.

The majority of the job cuts are expected to take place in Calgary, where both firms are headquartered.

The new company will operate as Cenovus Energy and will be based out of Calgary.

“As with any merger of this type, there will be overlap and there will be some difficult decisions as we work to create a combined organization best positioned for the future,” Kim Guttormson, communications manager at Husky, said in an emailed statement.

His counterpart at Husky, CEO Rob Peabody, said the deal would allow the combined companies to “make better returns in a tougher environment.”

Analysts generally applauded the surprise Cenovus-Husky hookup for its operational advantages but criticized the plus-20-per-cent premium in the price for Husky.

“The deal does make strategic sense,” said Manav Gupta of Credit Suisse in a note to investors.

Both companies are carrying a relatively hefty amount of debt and that’s why joining forces made financial sense.

While the oilpatch has struggled for many years, this deal is happening in a remarkably unique time in the industry, with many companies bleeding money with historically low oil prices that even turned negative this year.

Earlier in 2020, Cenovus and Husky shares had lost 63 per cent and 70 per cent of their value, respectively.

The all-share deal will likely spark more mega-mergers among Canadian oil and gas majors, according to a veteran oilsands analyst.

“This is likely just the start of big deals in Canadian energy land and thus it begs the question of who is next?” said analyst Phil Skolnick of Eight Capital in a report on Monday.

“As seen in the U.S. with the accelerated M&A activity, when there’s one meaningful transaction, there’s likely more to come.”