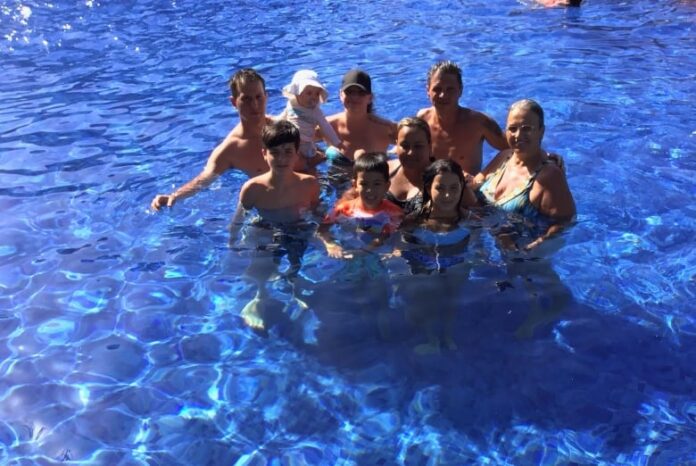 Corrine Fiddler has been celebrating Christmas with her entire family in Meath Park, Sask., about 180 kilometres northeast of Saskatoon, for 36 years, but this year she and some of her family members have been stranded in Punta Cana, Dominican Republic, for more than a week.

For Fiddler, this meant celebrating Christmas apart from her husband and son. Fiddler’s travelling group of 10, including some family and a close friend, were supposed to be back in Saskatoon on Dec. 21, but their Sunwing flight was cancelled.

“Every day since then we have had to pack our bags, check out of our hotel, and wait in the lobby for a shuttle to take us to the airport, but every day it’s cancelled,” she said.

“We have a lot of luggage, including my granddaughter’s stroller. Sunwing knows there’s no plane coming, but we are being run around like dogs chasing their tails.”

CBC connected with more than a dozen people stuck in the Dominican Republic, Mexico and Cuba who are all facing similar frustrations.

Fiddler said her group is reluctant to even go into the pool at their hotel, for fear that they might be asked to rush to the airport at any moment. Four of them are missing out on work.

“We are running out of formula for my 11-month-old grandbaby. There are diapers and medications that we just can’t go buy off the shelf,” the 57-year-old said.

“Again today, we were told we are flying out, did the same song and dance and jump on the merry-go-round, only to find it was cancelled.”

Fiddler said she has to wash her clothes in the sink daily, while her daughter who has three children had to pay $80 USD to have eight pieces of clothing washed.

“Our home is decorated, but we aren’t there. My husband and other son are still at home. It’s depressing and very frustrating,” she said.

“Sunwing is being dishonest. We demand clarity.”

In an email statement, Sunwing said it has completed two recovery flights so far this week.

“We have planned another eight recovery flights which are scheduled to depart up to and including December 30 and are currently finalizing recovery plans for our remaining passengers in destination,” the statement said.

The company said stranded customers who would prefer to book an earlier return flight on another carrier can do so at their own cost and may submit a refund request for their unused Sunwing return flight.

Saskatoon International Airport said in a statement that services are returning to normal, “with the exception of Sunwing, which continues to face significant crew and aircraft challenges,” and encouraged travellers to check flight statuses before heading to the airport.

Patryk Jagielski, who is stranded in Cayo Coco, Cuba, said he and his wife were supposed to return on Christmas Eve, but a dearth of communication from Sunwing has them feeling forgotten.

The pair had been planning the trip as a honeymoon since the couple got married during the pandemic and were unable to travel due to restrictions.

“It has turned truly into a nightmare. Everything fell apart.”

The Winnipeg resident suspects there are close to 180 people who came in on the same flight as him still stranded in different parts of Cuba.

Jagielski lives with attention deficit disorder and said he cannot find medications equivalent to his Canadian doses in Cuba.

He said he tried to stretch his last dose a little longer, but has been without for two days and counting.

“It’s taking a very big toll on both of us,” he said. “I’m not doing well and it’s incredibly stressful. We are left in the dark. Our mental health is deteriorating and my wife is often crying as she has some anxiety issues.”

He said he consulted with the Winnipeg airport but, “no flight seems to be coming here from there anytime soon.”

The couple have contacted the Canadian consulate in Cuba twice, and say they were told the first time that travel is a personal responsibility and the second time that they should look into alternative carriers.

“They are not being very helpful. The complete lack of information is very difficult to deal with,” he said.

“Sunwing gives huge hope and the next minute they let you down. Their tomorrow never seems to come.”

In an email statement, a spokesperson said the Ministry of Transport is monitoring the situation at airports very closely.

“Both Transport Canada and our office are in regular contact with airlines and airports to ensure they have what they need to keep passengers moving safely. The safety of passengers and crew is our top priority,” the spokesperson said.

Could be stuck another week

Saskatoon resident Jody Klimkiewicz, who is stuck in Punta Cana with her husband, said passengers from the Toronto region are being given “priority,” as a flight was chartered yesterday.

“It’s frustrating when people from Ontario who have been here for three days get rescued,” she said.

“We do have a flight scheduled for tomorrow, day seven for us, but I’ve found there’s no flight path registered in Saskatoon for it,” she said.

“We could be stuck here for another week.”

Klimkiewicz said she saw another stranded Canadian traveller have what appeared to be a heart attack.

“The stress levels of being here are astronomical,” she said.

“We are woken up in the middle of the night to get down to the lobby in 10 minutes to catch the shuttle to the airport. We check out and sit there all day and the shuttle never comes.”

Klimkiewicz said families are sleeping on lobby floors with their kids, just waiting for shuttles to the airport.

She said the plane tickets with other carriers can go up to $3,000 per person.

“People who have the means can get out, and that was the suggestion of the government also, but those who don’t have that are stuck in a waiting game.”