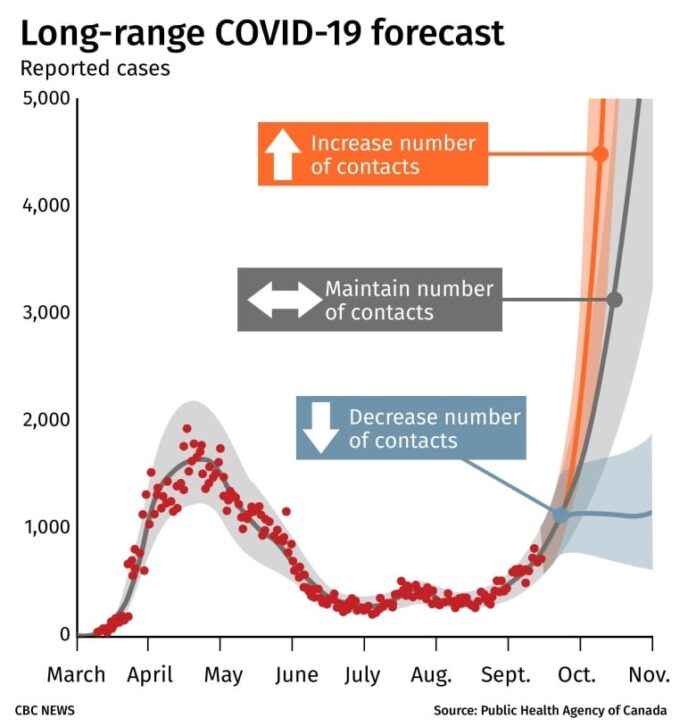 Canada is at a “crossroads” in its pandemic battle and the actions of individual Canadians will decide whether there’s a massive spike in COVID-19 cases coming, according to the latest projections from the Public Health Agency of Canada (PHAC).

Federal health officials presented new modelling today that shows the epidemic is accelerating nationally. They warned that if Canadians don’t step up preventative measures, the virus could spread out of control and trigger a wave of infections bigger than the first one.

Cases could climb to more than 5,000 daily by October, according to the projections.

“With minimal controls, the virus is capable of surging into a very sharp and intense peak because most Canadians don’t have immunity to the virus,” Chief Public Health Officer Theresa Tam told a news conference in Ottawa today.

If the current rate of contact is maintained, the epidemic is expected to re-surge — but if that rate increases, it is expected to surge “faster and stronger.” That has been the experience in other countries, Tam said.

The “rate of contact” refers to how many individuals, on average, one person interacts with daily. The more people we are in close contact with each day, the more likely we are to interact with someone who is infected, become infected ourselves and then transmit the virus to other people, according to PHAC.

Rapid detection of new cases and a swift response to outbreaks are both key to controlling the pandemic, PHAC modelling documents show.

Tam said there has been a significant demographic shift in the caseload since June: instead of the virus disproportionately affecting elderly Canadians, most infections are now being reported in Canadians aged 20 to 39.

Deaths and hospitalizations are also lower. But Tam warned that people must take collective action to prevent the spread to more vulnerable populations.

“People don’t exist in age group cohorts from morning to night,” she said. “In a community, that is going to spill over into high-risk populations. And how we protect those populations depends on all the lessons we learned that we had in the first instance in looking after long-term care facilities.”

Tam and her deputy, Dr. Howard Njoo, held a news conference today to present the updated modelling. They were joined by Health Minister Patty Hajdu and Minister of Public Services and Procurement Anita Anand.

The modelling shows that increases in the caseload have occurred in regions west of the Atlantic provinces — but there is still a lot of variation across the country.

In Ontario, the most populous province, three so-called “hot spots” — Toronto, Peel and Ottawa — were ordered to follow more restrictive measures on the size of gatherings, for example. That restriction — limiting inside gatherings to 10 people and outdoor gatherings to 25 — was subsequently expanded across the province.

Asked if there could be another round of lockdowns, Tam said that will depend largely on the behaviour of Canadians now.

Canada at a ‘bit of a crossroads’: Tam

“You can avoid it. So my message today is the time is now. We are at a bit of a crossroads,” she said. “If you manage to reduce those contacts and make some choices of not going to big gatherings and some of these events, you can manage this without a lockdown.”

The last modelling figures were released on Aug. 14. At that time, Canada’s top doctors said they were striving for a best-case scenario but preparing for the worst: a so-called “fall peak” of COVID-19 cases across Canada that would threaten to overwhelm the public health care system.

PHAC officials are aiming for a “slow burn” scenario, in which the number of cases remains low enough for the public health care system to keep ahead of the influx of patients.

But officials also are also planning for a “reasonable worst-case scenario” — a fall spike in infections followed by ongoing peaks and valleys that put excessive pressure on the health care system.

The recent rise in cases coincides with the flu and cold season, which could put added strain on hospitals and other health resources.

Health care workers have been working on the front lines for months now and are now bracing for a possible spike in hospitalizations, prompting concerns about potential burnout.