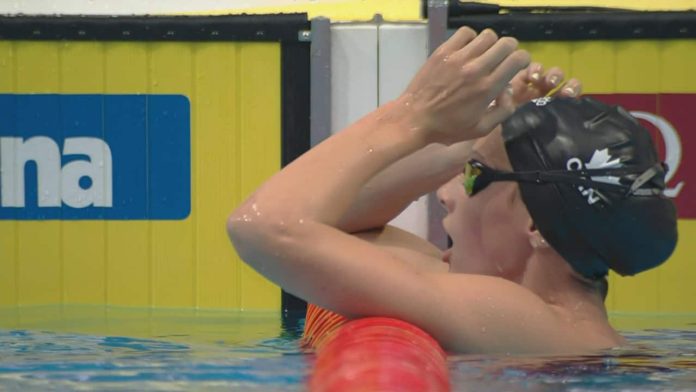 Summer McIntosh of Kelowna, B.C., capped a sensational week of swimming on Saturday, becoming the first Canadian with two victories and four medals at a single world championship.

The 15-year-old lowered her junior record time to four minutes 32.04 seconds in the women’s 400-metre individual medley on Saturday in Budapest, Hungary. Earlier this week, she also set world junior marks in the 200 butterfly (gold) and 400 freelstyle (silver) while earning freestyle relay bronze in the 200.

‘”This is a dream come true,” McIntosh gushed to the crowd in the post swim on-deck interview. At 15 years 311 days, she is the second-youngest winner of the women’s 400 IM behind Tracy Caulkins of the United States, who was 15 years 224 days in her 1978 win in West Berlin.

McIntosh took the lead early in Saturday’s race and waged a battle with American Katie Grimes, who touched the wall in 4:32.67 for her second silver of these worlds after placing second in the 1,500. Teammate Emma Weyant, the 2020 Olympic silver medallist, earned bronze in 4:36.00.

“It’s really cool to race someone like Katie as she is around my age and she’s a really tough competitor,” said McIntosh, who clocked 4:34.86 on April 9 at Canadian trials. “So I’m looking forward to racing her and keep pushing myself.” 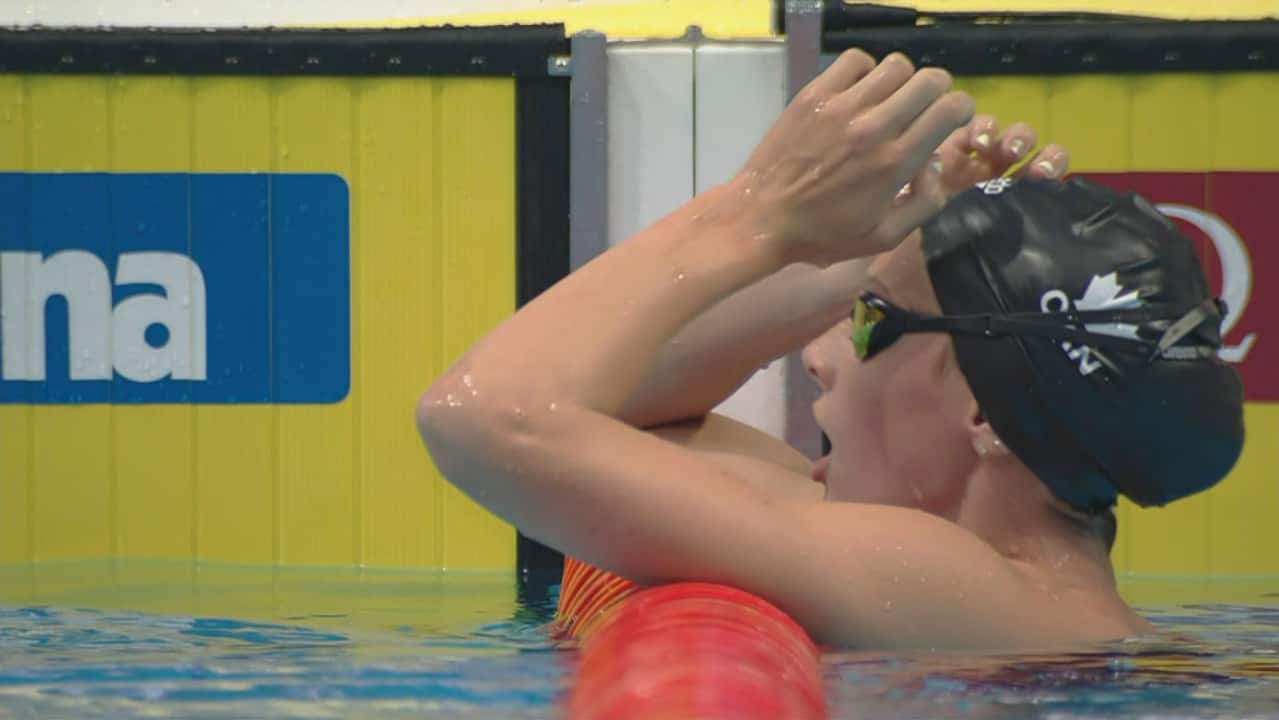 The 15-year-old edged American Katie Grimes by 0.63 seconds at the FINA World Championships in Budapest.

Katinka Hosszu of Hungary had her streak of consecutive world titles in the 400 medley halted at four as she finished fourth in 4:37.89. The 33-year-old has won the race five times in her last seven appearances at worlds and still holds the world record of 4:26.36 and 4:29.33 championship mark from 2016 and 2017, respectively.

Canada’s women wrapped up the competition with bronze in the 100 medley relay, matching their result from 2019 worlds.

Kylie Masse, Rachel Nicol, Maggie Mac Neil and anchor Penny Oleksiak stopped the clock in 3:55.01, behind the Americans (3:53.78) and Australia (3:54.25). It was Nicol’s first world medal while Oleksiak broke a tie with Masse with her ninth career medal at the event, all in the relay.

“‘It’s obvious at this point I wouldn’t be here without the team, so it feels weird to claim that title on my own,” Oleksiak told Swimming Canada of her success. ”I feel really lucky to be part of Team Canada.” 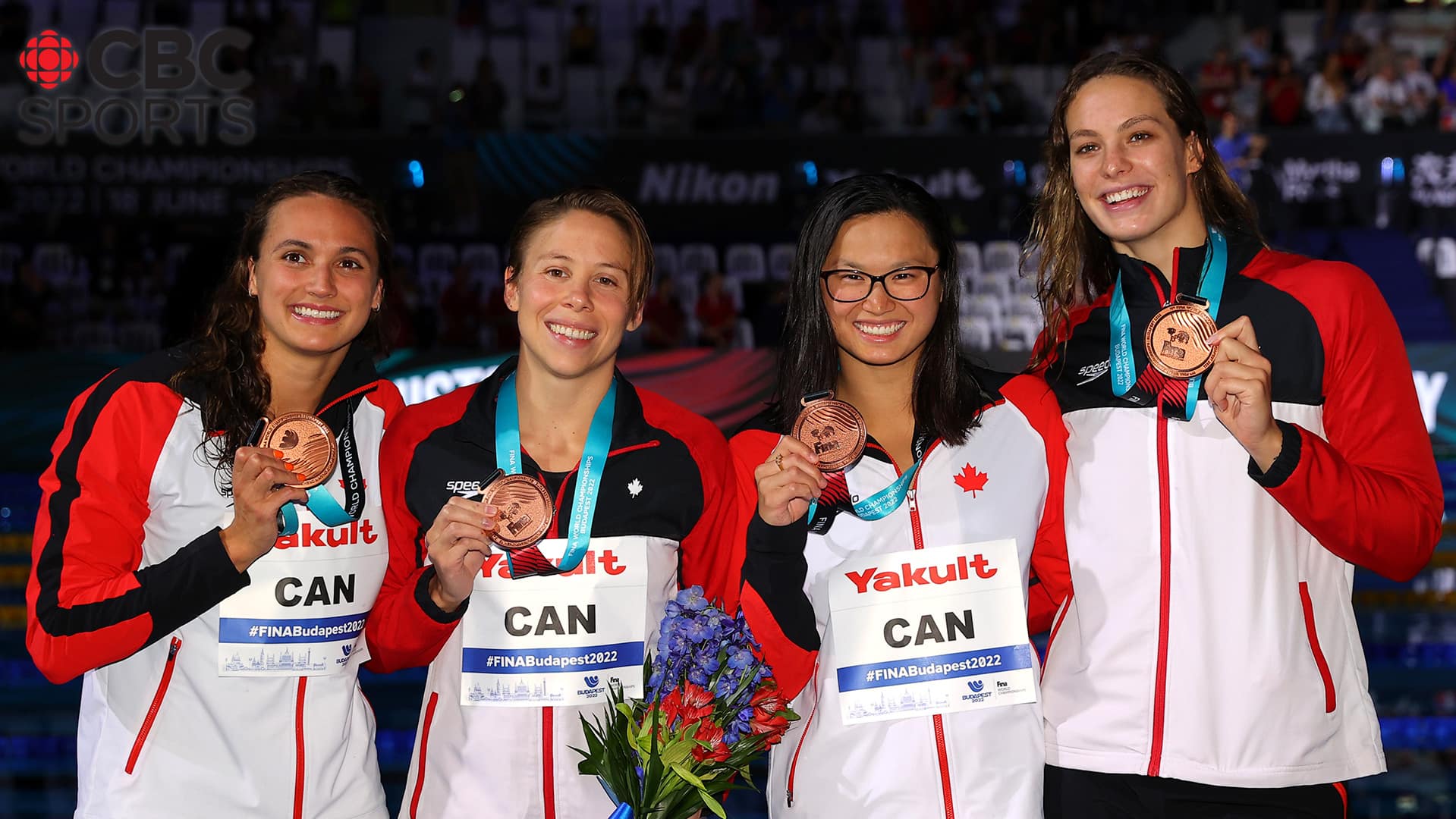 The 22-year-old from Toronto, Ont., becomes the most decorated Canadian swimmer at the aquatics world championships after winning bronze in the 4x100m medley relay.

Saturday’s relay bronze was the national record-extending 11th medal — three gold, four silver, four bronze — for Canada at these worlds after it surpassed the mark of eight at a single world championships from 2019 on Friday.

McIntosh only led Grimes by 9-100ths of a second through 50 metres but was 62-100ths ahead midway through the backstroke leg and under world-record pace through 200 metres, in front by 1.33 seconds. 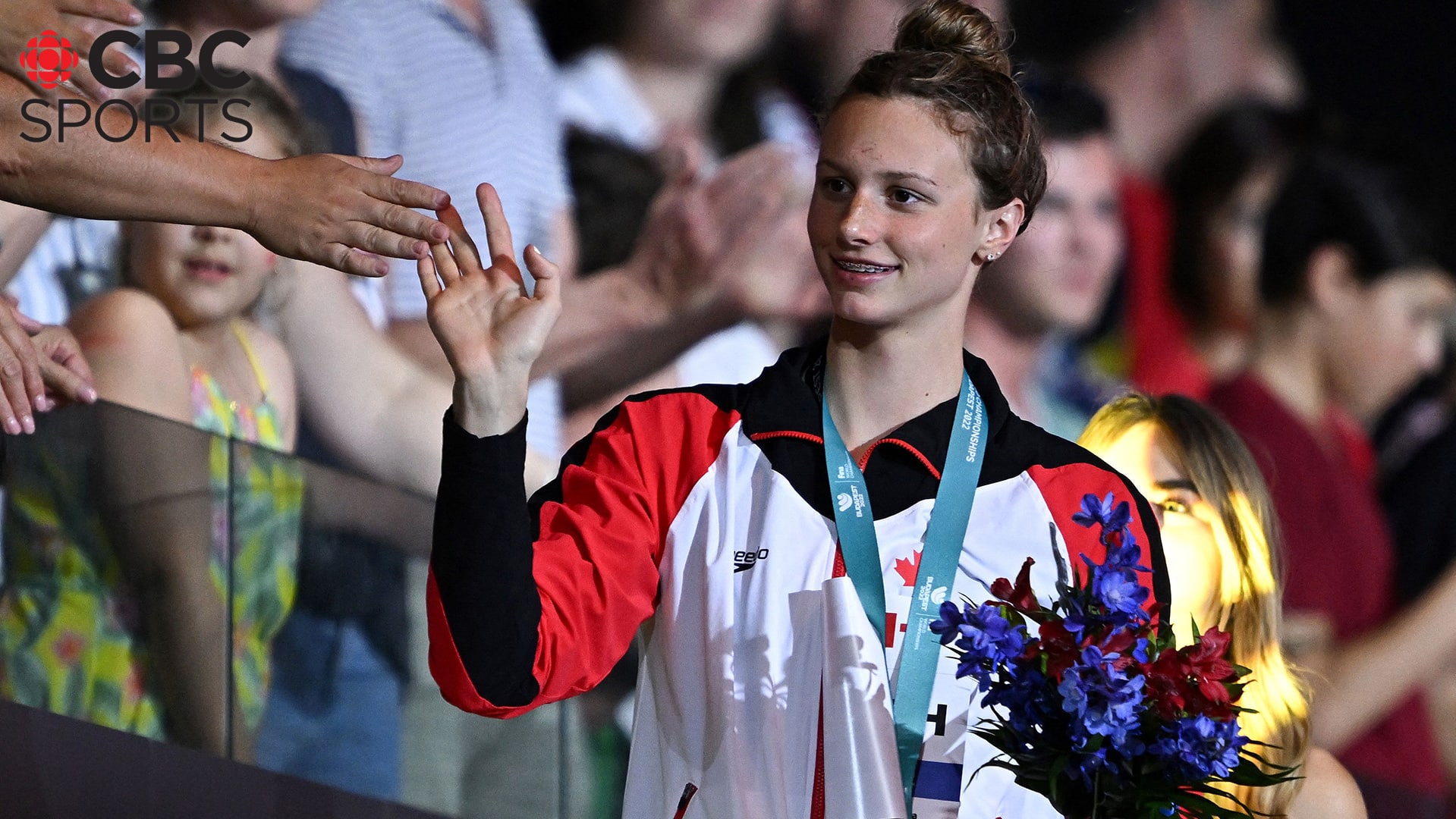 Hosszu gained ground in the breaststroke and moved into third spot at the 250-metre mark, with McIntosh holding a 2.15-second advantage over Grimes. But Weyant overtook Hosszu for bronze position through 300 metres and stayed there while Grimes closed to within 98-100ths of McIntosh with 50 metres remaining.

Last summer, a 14-year-old McIntosh was the youngest member of the Canadian Olympic team in Tokyo but certainly didn’t show her age on the world’s grandest athletic stage. 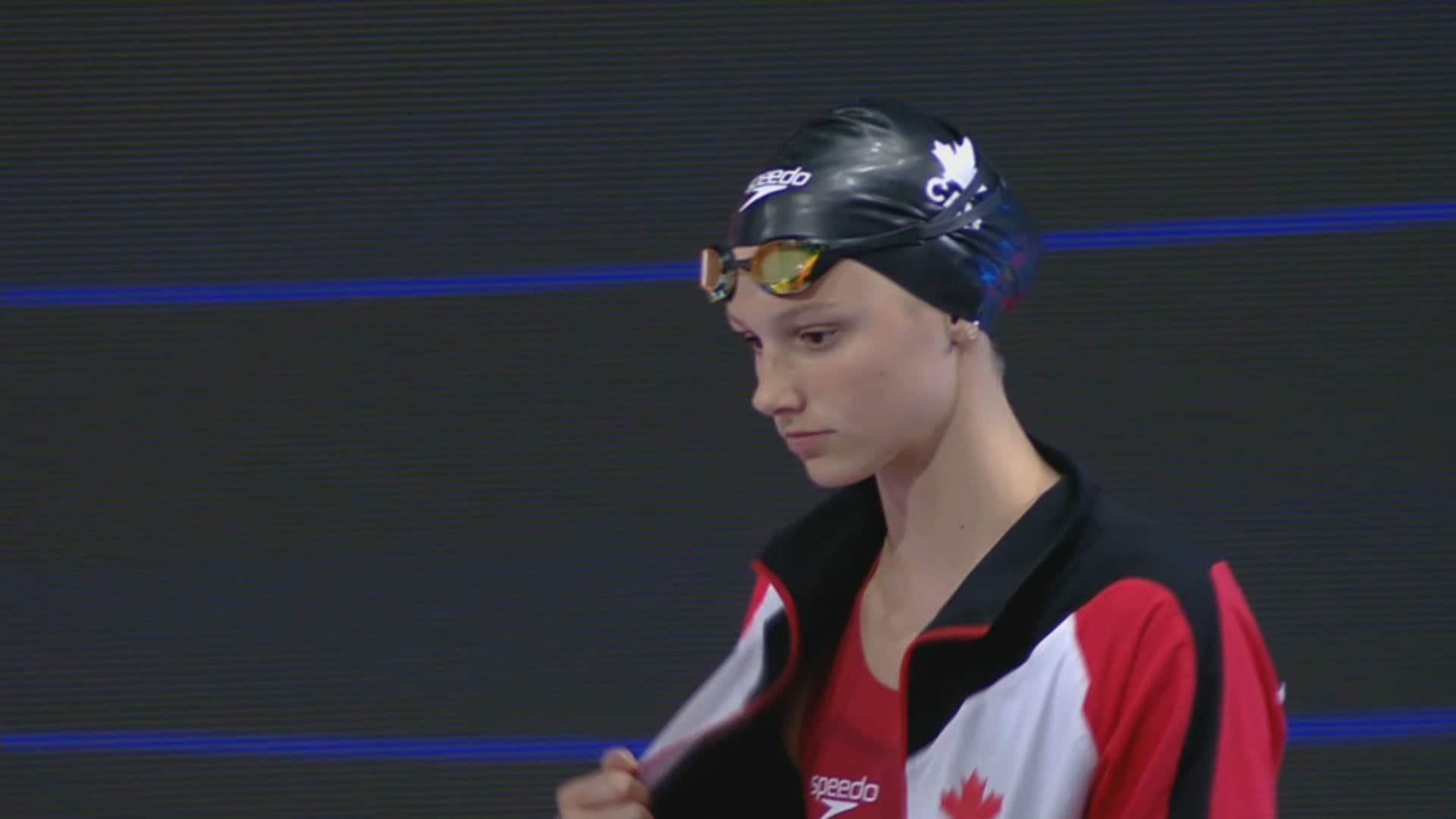 The Toronto native finished with a time of 3:59.39 for the 2nd-place finish at the FINA World Aquatics Championships in Budapest, Hungary.

At national trials two months ago in Victoria, McIntosh turned heads by winning four events and swimming the 400 free in the third-fastest time this year. 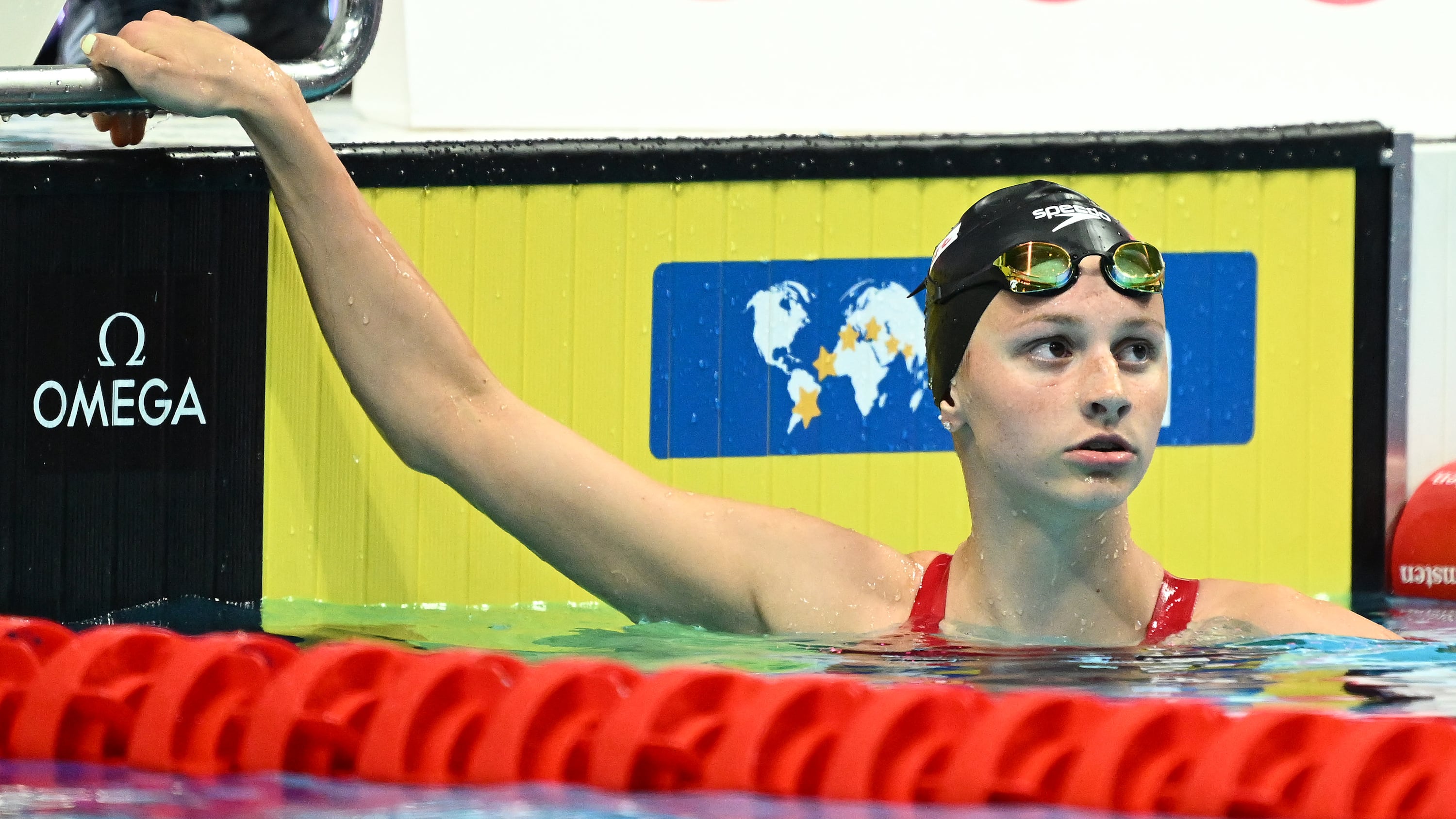 15-year-old Summer McIntosh swam the fastest qualifying time, and set a world junior record in the women’s 200 metre butterfly semifinals, to advance to the final at the 2022 FINA world championships in Budapest.

In the women’s medley relay, the Americans were favoured for gold while the Swedish foursome of Hanna Rosvall, Sophie Hansson, Louise Hansson and Sarah Sjoestroem were the fastest in qualifying in 3:56.77.

Masse, who fell short of the 200 backstroke podium on Friday in her bid for a third medal in Hungary, got the Canadians off to a quick start with the second-fastest reaction time at 0.54 and led Regan Smith of the U.S. for top spot through 50 metres and by 1-100th at the end of the leg.

Nichol took over in backstroke and fell off the pace, trailing the Americans 1.27 seconds. Mac Neil fell behind by 1.51 halfway through the butterfly and by 1.40 when anchor Penny Oleksiak entered the pool for the free.

Canada’s most decorated Olympian ever was unable to close the gap in the first half of her leg but managed to draw closer near the wall and finished 1.23 seconds off the winning time. 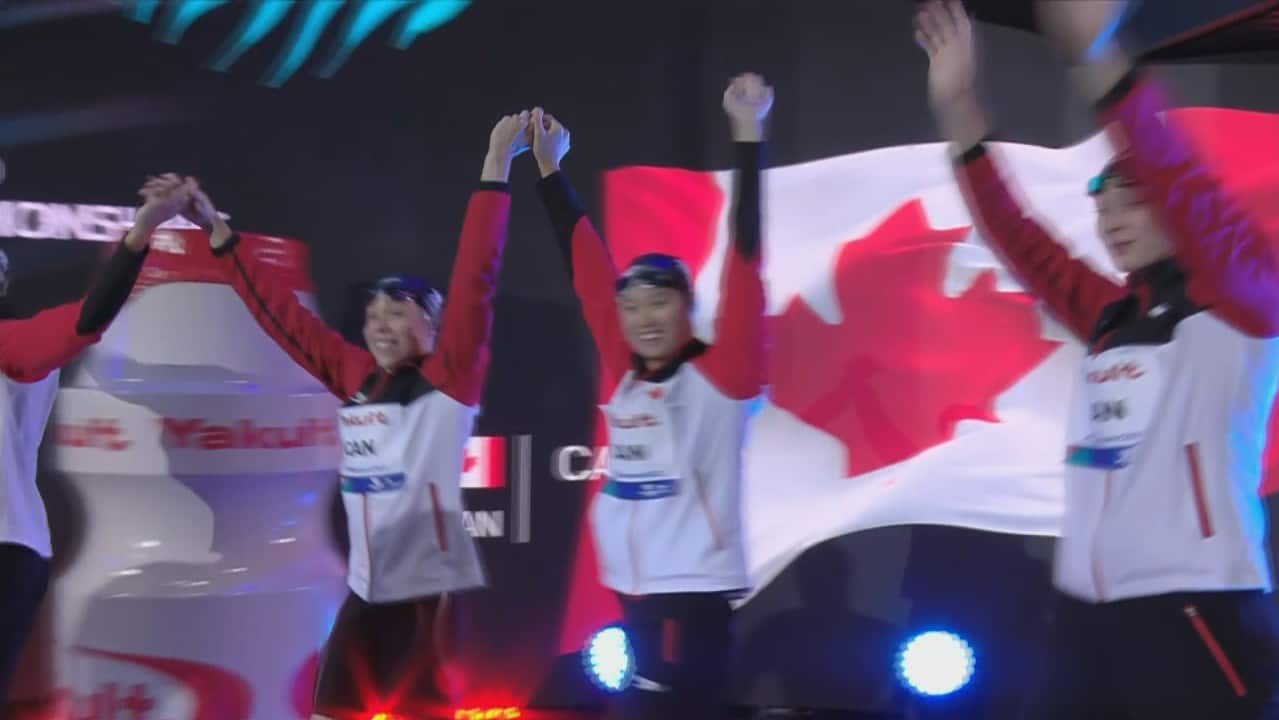 Masse, who won gold in the 50 backstroke and silver in the 100 earlier this week, is tied for second with Ryan Cochrane with eight career medals.

“It’s always special to be part of a relay team,” said Masse, based at HPC-Ontario. “It’s nice to be doing it more than just yourself and that always pushes me.”

The American quartet of Lilly King, Torri Huske, Claire Curzan and Smith proved too strong for the rest of the field.

“We take a lot of pride in that relay and really wanted to put in a good time and get that gold back from last summer [ at the Olympics]. We came out and did that, and it was a great race,” said Curzan, who anchored the U.S. home.

On Friday, the 22-year-old Oleksiak provided her trademark finishing kick in the mixed 100 relay, overtaking Curzan to push Canada to a silver medal with a national record time of 3:20.61. All eight of her medals (two silver, six bronze) have come in the relay. 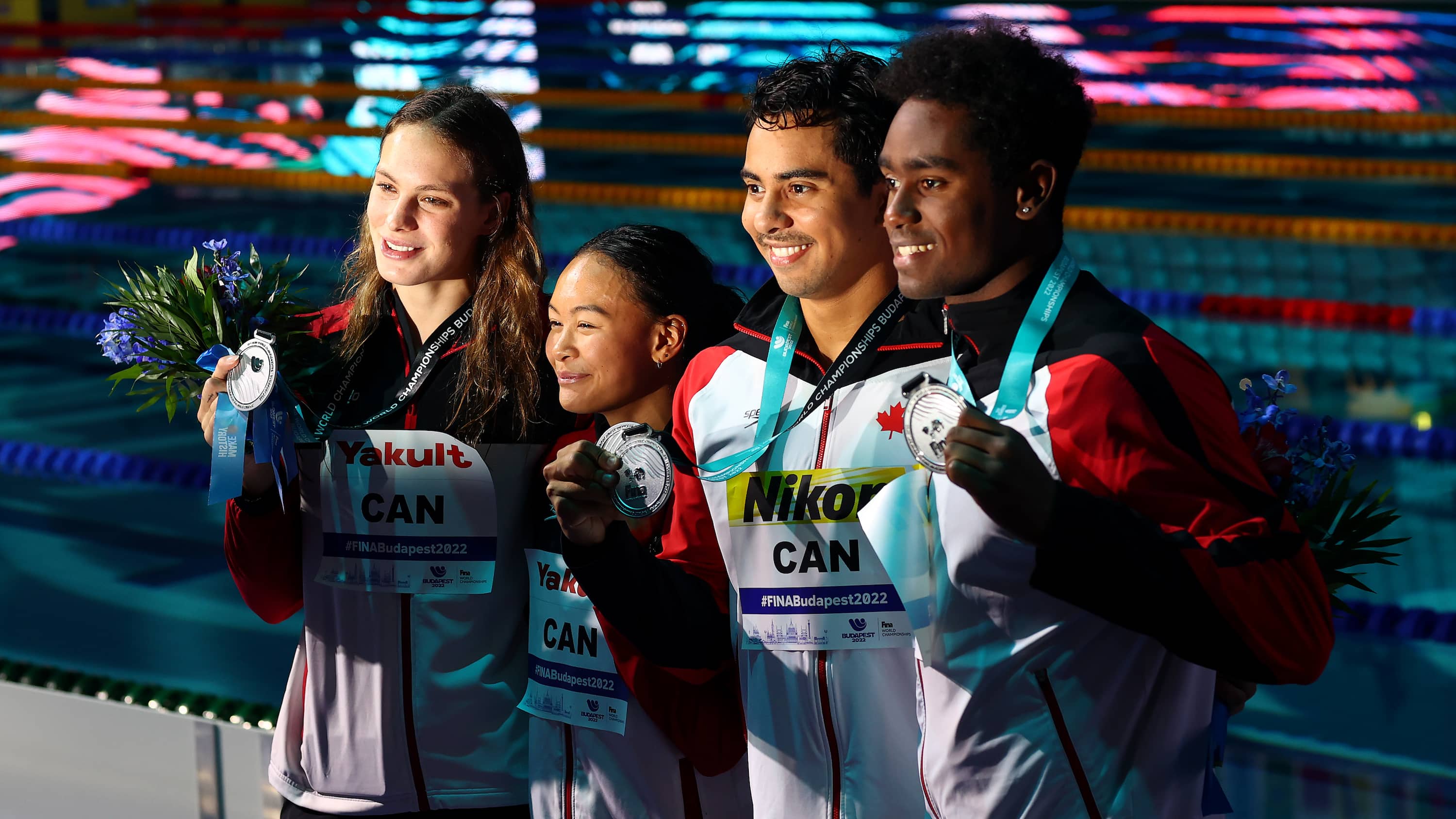 Oleksiak was fourth in the women’s 100 freestyle on Thursday, reaching the finish an agonizing 6-100ths behind bronze medallist Huske. The Toronto native won gold in the event at the 2016 Rio Olympics and placed fourth last summer in Tokyo. 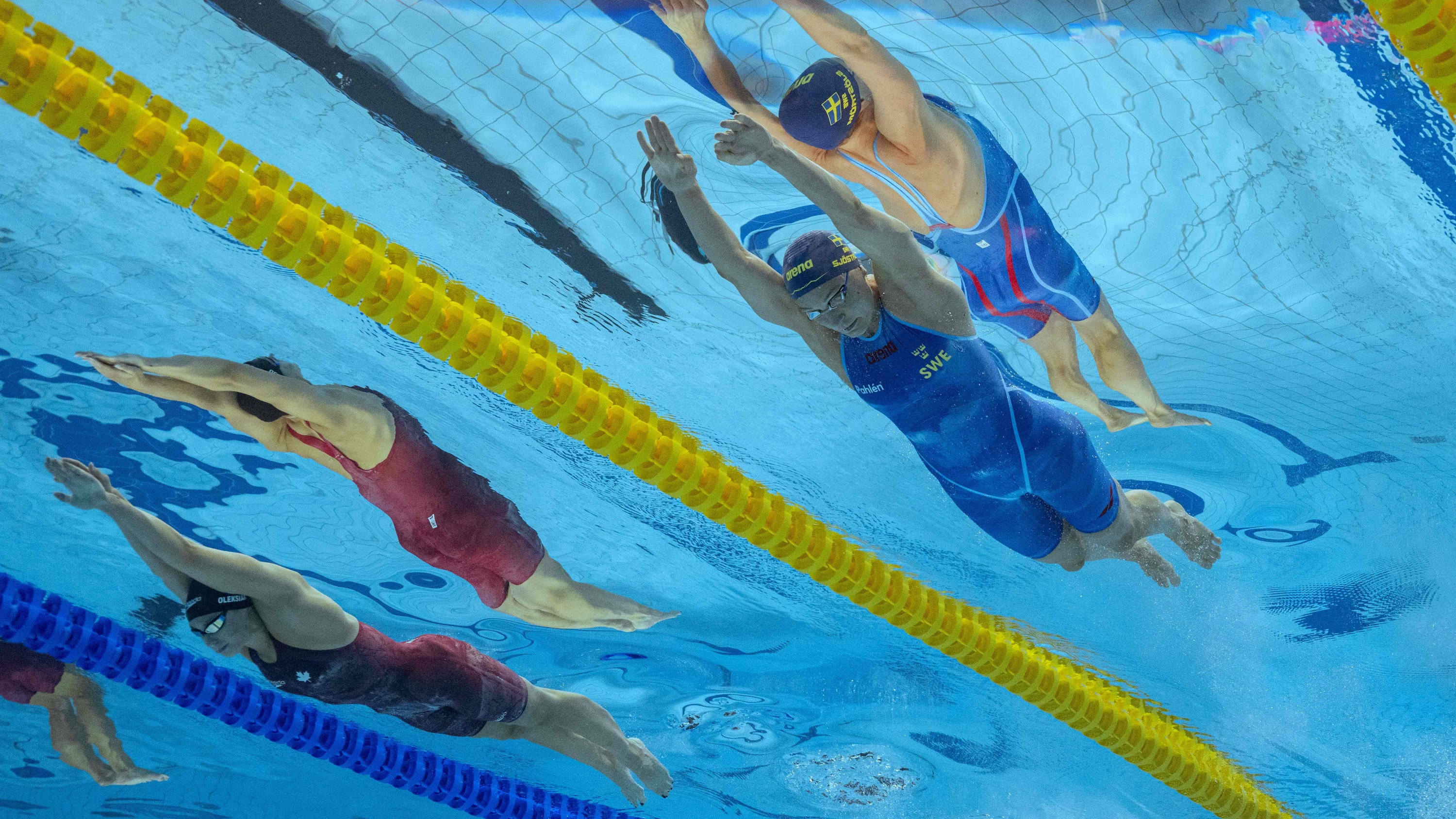 In the men’s 4×100 medley relay, Canada’s Javier Acevedo, James Dergousoff, Joshua Liendo and Ruslan Gaziev swam to 11th in the preliminaries in 3:35.62.

Liendo led all Canadian men this week with bronze in the 100 free and 100 fly and silver in the mixed 100 free relay. 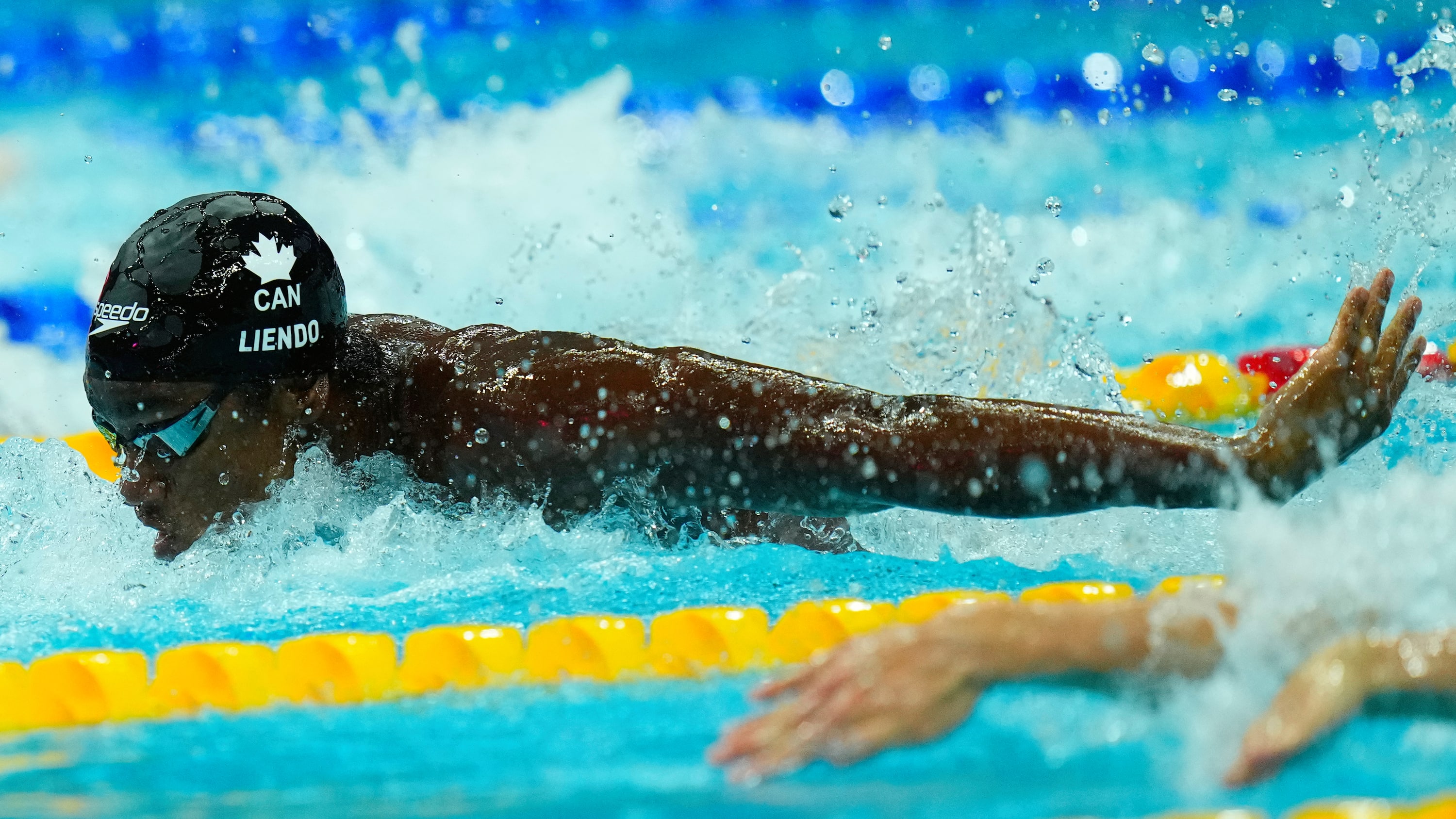 Justin Ress of the United States won gold in the 50 backstroke in dramatic circumstances after officials overturned his initial disqualification following a lengthy review.

Victory was earlier awarded to compatriot Hunter Armstrong after it was ruled that no part of Ress’s body was above the water as he reached first for the wall.

Ress, who had set the pace in the heats and the semifinals, was later reinstated as the winner and the medal ceremony held again, with Armstrong taking silver and Polish teenager Ksawery Masiuk having to settle for bronze.

Meilutyte was handed a 24-month suspension in 2019 for anti-doping violations and returned to competitive action only in December last year.

Action in Budapest continues Sunday for live action beginning at 7 a.m. ET with the open water swimming team relay, followed by Canada vs. Netherlands in the women’s water polo crossover game at 8 ET.

Coverage continues every day through July 3. Click on the link below for a full schedule of events.