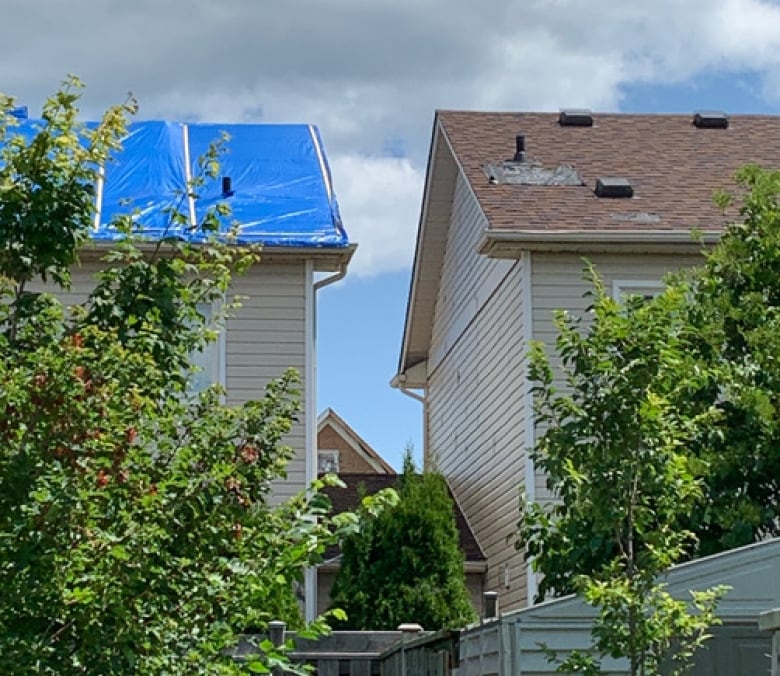 Fran Ferguson said she often doesn’t take severe weather warnings very seriously, but something — maybe a feeling or the way the wind was blowing on Thursday, July 15 — made this one different.

When the Barrie, Ont., resident got an alert on her phone, she started to prepare her cellar, stashing her purse, important medication and a bed for her dog down where she knew they’d be safe.

“All of a sudden, the electricity went out. I looked up and I heard what was like a freight train. I just grabbed the dog and was running.”

It’s an unfortunately familiar story that has been repeated across Canada this summer. The country, on average, records more tornadoes annually than any other in the world, except for the U.S., at about 60 per year — though meteorologists estimate there are more that go undetected.

Yet the National Building Code of Canada puts little emphasis on requirements to protect against uplift — the types of winds created by tornadoes.

While it’s difficult to say whether climate change could contribute to an uptick in tornadoes in Canada, our growing population has translated into a larger human footprint, meaning there are more buildings where there used to be forests or farmland — and more opportunities for tornadoes to cause damage to human structures.

For years, Kopp has been advocating for hurricane straps to be required under Canada’s building codes. Also known as hurricane clips, the small metal brackets can help prevent a roof from flying off by securing each truss to the top of a wall.

“Adding hurricane straps is less than a couple hundred dollars per house, so I think it’s a cost-effective measure,” he said.

Hurricane straps are effective up to EF-2 wind loads, and Kopp said the vast majority of tornadoes in North America are EF-2 or less.

It’s something Ferguson said she would consider if she ever had a new house built.

She managed to escape the tornado unscathed, and when she went outside to check out her home, she said it didn’t seem too bad, save some water damage inside and one hole on the roof that needed patching.

She was surprised to learn that her three-year-old roof needed to be completely replaced, because the tar paper — a weatherproofing layer between the plywood and the shingles — had been lifted up by the winds and the roof had separated in places.

So changing building codes might be a good idea, Ferguson said.

“If it can even save a few people, to me, it’s well worth it. Everything we can do to make our houses safer, we should do.”

It was one of five tornadoes — all in the EF-2 range — that touched down in southern Ontario on July 15.

On a single day the month before, four tornadoes touched down in southern Quebec over the span of an hour and fifteen minutes, leaving one man dead in Mascouche, Que.

Barrie city councillor Natalie Harris hopes more deaths could be prevented in the future, if building codes are updated.

After experiencing the Barrie tornado firsthand, she started to research whether the damage to her city could have been prevented. That’s how she ended up speaking with Kopp, and joining his call for hurricane straps to be required.

Harris had been visiting her 15-year-old son at her ex-husband’s home when the tornado struck. The pair made it to the basement just in time. When they came back up to inspect the damage, Harris discovered the roof was missing.

“I looked up the stairway, and I saw the sky,” she said. “My son, if he was upstairs in his room, I don’t want to even think about what would’ve happened.”

Now Harris has launched her own call for Ontario to update its building code to include requirements for severe wind protection.

She has a meeting set up with stakeholders and members of provincial parliament next week, and plans to submit a motion to Barrie city council in August. Her motion calls on the city to propose changes to the Ontario building code, while also providing financial incentives to encourage homeowners who are rebuilding after the tornado to include severe wind resiliency measures.

Harris has already received support from fellow council members and Barrie Mayor Jeff Lehman, who called the plan “a low-cost increase to construction methods that could help mitigate damage in certain storms.”

For Harris, it’s simple: “It could prevent deaths in the future.”

The idea of encouraging the use of hurricane straps in new builds is something the Canadian Home Builders’ Association (CHBA) has also been looking into, though the organization pushes back against the idea of making those extra measures mandatory.

“In our view, before the building codes can start addressing that, we do need to understand better where tornadoes are likely to hit, because the changes that would need to be made to a low-rise building like a home are quite substantive,” said Frank Lohmann, the director of building science at the CHBA.

“If we started applying [these changes] everywhere, that would increase the cost of homes in all areas, and it may not be necessary in all areas.”

He said a better path forward might be to first produce a set of recommended tornado measures, which could be applied voluntarily, based on the location of the building and other factors, such as insurance incentives.

The association is currently participating in developing best practice standards to build low-rise structures that could come out of an EF2 tornado relatively undamaged, Lohmann said. The standards are expected to be released in 2022, and would be used by home-builders, designers and contractors across Canada.