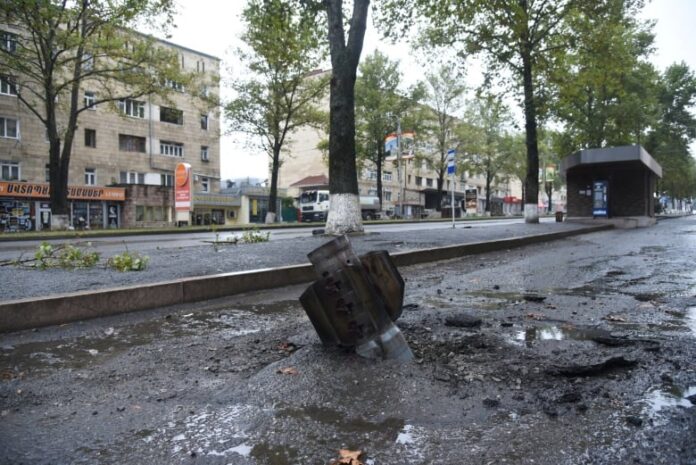 The federal government is suspending the export of sophisticated Canadian drone technology to Turkey while Ottawa investigates claims that it is being used by the Azerbaijani military against Armenian forces in Nagorno-Karabakh, Foreign Affairs Minister Francois-Philippe Champagne said Monday.

Champagne was responding to calls by Canada’s Armenian community and the disarmament group Ploughshares International to stop the export of Canadian drone optics and laser targeting systems to Turkey following reports that Ankara has deployed dozens of unmanned aircraft in combat against Armenian forces in the breakaway Nagorno-Karabakh region of Azerbaijan.

Kelsey Gallagher, an expert with Project Ploughshares who has studied exports of Canadian drone technology to Turkey, said these sensors are used by Turkish TB2 Bayraktar combat drones, allowing them to see what’s happening on the ground day and night, in all weather conditions.

Armenia has accused Turkey of using TB2 Bayraktar combat drones left behind in Azerbaijan following recent joint exercises to pummel Armenian forces from the air, collect intelligence and direct artillery and missile fire at both military positions and civilian infrastructure.

Armenia also has accused Turkey of redeploying fighters from Syria to support Azerbaijani forces. Turkey has denied sending people or arms to the conflict.

Champagne’s department to ‘assess the situation’

“Over the last several days, certain allegations have been made regarding Canadian technology being used in the military conflict in Nagorno-Karabakh,” Champagne said in a statement, adding that he directed officials at Global Affairs Canada to investigate those claims as soon as they were made.

“In line with Canada’s robust export control regime and due to the ongoing hostilities, I have suspended the relevant export permits to Turkey, so as to allow time to further assess the situation.”

Nagorno-Karabakh lies inside Azerbaijan but has been under the control of ethnic Armenian forces backed by Armenia since it declared independence from Azerbaijan in 1991 during the breakup of the Soviet Union.

Fierce fighting along the entire Line of Contact in Nagorno-Karabakh raged for the ninth consecutive day on Monday, with Armenian authorities reporting heavy bombardment of the region’s capital Stepanakert and several other towns. The Armenians reported being hit by cluster bombs that are prohibited by the UN Convention on Cluster Munitions.

“Canada continues to be concerned by the ongoing conflict in Nagorno-Karabakh resulting in shelling of communities and civilian casualties,” Champagne said.

“We call for measures to be taken immediately to stabilize the situation on the ground and reiterate that there is no alternative to a peaceful, negotiated solution to this conflict.”

Speaking at a press conference this morning in Ottawa, Prime Minister Justin Trudeau announced that he is sending Champagne to Europe “to discuss with our allies the developments in Eastern Europe and the Caucasus, particularly in Nagorno-Karabakh.”

“This acknowledges Turkey’s direct involvement in the aggression against the people of Artsakh (Nagorno-Karabakh) perpetrated by Azerbaijan,” Armenia’s ambassador in Canada, Anahit Harutyunyan, said in a statement, referring to the Armenian name of Nagorno-Karabakh.

“Only through joint efforts can the international community stop Turkish-supported Azerbaijani aggression, backed by foreign mercenaries, against the vulnerable Armenian population.”

Hagop Arslanian, deputy chairman of the Armenian General Benevolent Union (AGBU) in Canada — one of the largest Armenian community organizations — said the group is  “satisfied” with Ottawa’s announcement.

“Let it be clear that there is no military resolution to this conflict,” Arslanian said.

The Armenian community also wants Trudeau to take on a more active diplomatic role by calling his counterparts in Turkey and Azerbaijan to demand an immediate ceasefire, he added.

The international community doubled up on its efforts to achieve a ceasefire in Nagorno-Karabakh on Monday.

In a joint statement, U.S. Secretary of State Mike Pompeo, Russian Foreign Affairs Minister Sergey Lavrov and Jean-Yves Le Drian, France’s foreign affairs minister, condemned “in the strongest terms the unprecedented and dangerous escalation of violence in and outside of the Nagorno-Karabakh zone.”

The Azerbaijani embassy did not respond to Radio Canada International’s request for comment in time for publication.

“There’s no explanation for why Canada would block the export of defence materials to a NATO ally,” the statement said.

Turkish President Recep Tayyip Erdogan insisted on Monday that Turkey will stand with its ally Azerbaijan until it reaches “victory.” He also claimed that it was the international community’s silence in the face of what he called past Armenian aggression that encouraged it to attack Azerbaijani territory.

“In truth, lending support to Azerbaijan’s struggle to liberate territories that have been occupied is the duty of every honourable nation. It is not possible for the world to reach lasting peace and calm without getting rid of bandit states and their bandit leaders,” Erdogan said in an address to the nation following a cabinet meeting.

Earlier, Armenia’s Pashinyan said “a cease-fire can be established only if Turkey is removed from the South Caucasus.”