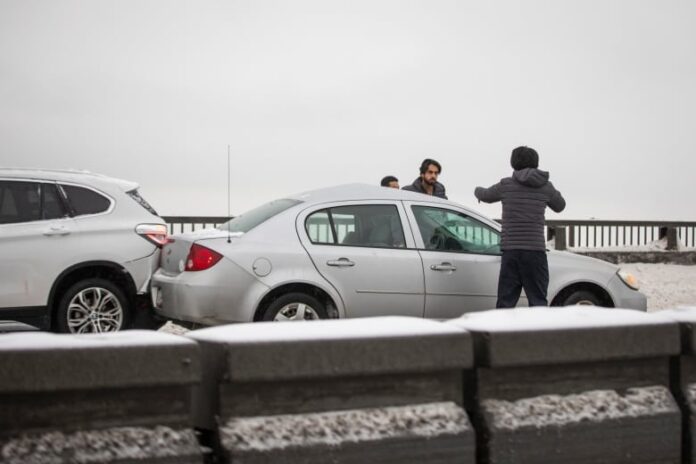 However, warming temperatures provided forecasters with optimism that rain could wash away many of the delays in time for Dec. 24 and 25.

“But where cold air has a harder time clearing out — namely the Fraser Valley — it may stay below freezing at ground level until Saturday morning which means the risk of freezing rain all night,” said CBC News meteorologist Johanna Wagstaffe.

In addition, a traffic advisory was issued by the Ministry of Transportation for Highway 3 from Hope to Princeton due to the risk from heavy snowfall mixed with freezing rain, and drivers were also warned of “moderate to high avalanche risk” on Highway 1 through the Fraser Canyon.

B.C. Ferries cancelled the first round-trips on a number of routes Friday morning, including ones connecting Metro Vancouver to Victoria, Nanaimo, the Sunshine Coast and the Southern Gulf Islands, with several cancellations throughout the afternoon as well.

TransLink asked customers to avoid travelling on Friday, and was forced to suspend service on the Expo Line for hours in the afternoon.

B.C. Transit had cancelled bus services in Victoria Friday morning, but slowly began reopening some routes in the afternoon.

All transit services in the Fraser Valley — a region about an hour’s drive east of Vancouver — have been suspended until “further notice,” according to the B.C. Transit website.

Predictions by Environment Canada of heavy snow, ice pellets and freezing rain in Metro Vancouver, Vancouver Island and the Fraser Valley starting Thursday night through Christmas Eve proved accurate, with around 10 centimetres of snow for much of the region on Thursday evening and Friday morning, followed by freezing rain.

B.C. Ferries spokesperson Deborah Marshall said the snow meant the ferry operator couldn’t ensure enough employees were available to staff several morning trips across a variety of routes, which had to be cancelled.

“When we look at the roadways, not only our customers having difficulties accessing the terminals, so do our staff,” she said.

“We’re really pleased the weather is starting to lift and we can get our service up and going again.”

However, the situation was less optimistic for transit services in Metro Vancouver, where ice buildup on SkyTrain lines caused the suspension of service on the Expo Line for several hours in the afternoon, significant delays on the Millennium Line, and closure of the Canada Line between Bridgeport and Richmond-Brighouse stations for a time.

“We’re setting up bus bridges wherever we can,” said TransLink spokesperson Thor Diakow.

The Expo Line was reopened between Waterfront and Scott Road Station by 4 p.m., while Braid and Sapperton stations were reopened after 9 p.m. The Millennium Line continued to experience heavy delays into the evening with no service between Lougheed and Burquitlam stations due to ice buildup in the guideway.

“We’re just basically asking for patience from people as we work to restore service,” said Diakow.

“It’s been a week of inclement weather, and the freezing rain is not ideal to the SkyTrain situation.”

The transition from snow to rain could have a significant impact on road and sidewalk conditions, while ice buildup could lead to tree branches breaking, Environment Canada predicted.

Transportation and Infrastructure Minister Rob Fleming said travel by road on Vancouver Island, the South Coast, or to and from the Interior should be avoided “unless absolutely necessary.”

WATCH | Minister advises against most travel: Bowinn Ma advises drivers in the Fraser Valley and on Vancouver Island to stay off the roads as heavy snow followed by freezing rain will cause dangerous conditions.

Most major highways in B.C. had travel advisories or closures on Friday, with drivers told to expect rapidly deteriorating conditions.

Wagstaffe said localized flooding could be a concern as temperatures warm from Friday to Saturday.

“We should all be in the clear by Christmas Day,” she said, “even if it’s a soggy one!”

Vancouver International Airport was at a virtual standstill Friday with very few flights operating and hundreds cancelled throughout the day.

WestJet cancelled all flights arriving and departing from the Vancouver airport from 11:50 p.m. PT Thursday until Friday evening at 5:50 p.m., dependent on weather conditions.

In addition, the airline cancelled flights at airports in Victoria, Nanaimo, Abbotsford and Comox, it said in an emailed statement on Thursday. Air Canada also cancelled dozens of flights at the Vancouver airport Friday.