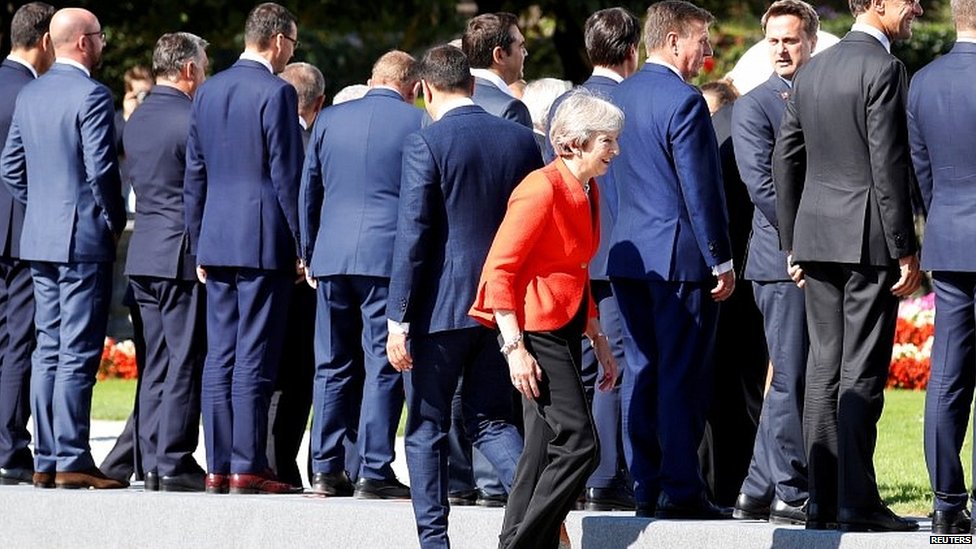 Theresa May will urge other EU leaders to give ground on the issue of the Irish border when she addresses them at a summit in Brussels later.

Brexit talks are deadlocked over the border, but the EU says it’s up to the UK to bring new ideas to the table.

BBC political correspondent Iain Watson says Mrs May will try to strike an upbeat tone about the significant progress that’s been made.

But he says expectations of any sort of breakthrough at the meeting are low.

The prime minister will address her fellow leaders on Wednesday evening, but won’t be present at the meal where they will decide what to do next.

It had been hoped that they would agree to call a special Brexit summit next month to sign off the terms of a deal between the UK and the EU, but with such a deep chasm between the sides over the Irish border, the leaders are likely to be reluctant to do that.

Both sides want to avoid that border becoming “hard” – i.e. having checkpoints or other physical infrastructure to carry out checks on goods – but they can’t agree on how that should be done.

A key sticking point is the so-called backstop – the safety net should no Brexit deal be reached – how long it should last and what form it should take.

Ahead of the Brussels gathering, the president of the European Council said there were “no grounds for optimism” that the two sides could bridge their differences but appealed for “goodwill and determination” to try and bring an agreement nearer.

Mrs May isn’t, though, expected to table any new proposals to end the border impasse.

Downing Street said she has told fellow ministers not to be “downhearted” if fellow European leaders do not set a date for a November summit, amid growing expectation in government that any final agreement may be pushed back to December.

The worst case scenario for Number 10 is that EU leaders are so fed up with the UK position and what they see as the lack of reality, that on Thursday, they formally say they will hold a no-deal summit in November.

That would switch them on to a track that would be hard to get off once in motion.

One EU source expressed disbelief tonight that Theresa May thought she could turn up tomorrow with nothing new. It was simply crazy, in their view, to suggest that the ball can be lobbed back into the EU court.

The best case, and it seems right now unlikely, dream scenario is for the EU to say that, after all, there is a deal in reach, so let’s get a date in the diary for the sign-off next month.

What seems more likely is a holding position. EU leaders could give some kinds of vague noises that both sides still want to pursue negotiations, so that the talks can get going again.

One Brussels source said that while it is “time for choices”, they could give the prime minister space and time to build a majority at home for a deal.

On the eve of Wednesday’s summit, former Conservative prime minister Sir John Major attacked Brexiteers, saying “those who promised what will never be delivered will have much to answer for.”

“They persuaded a deceived population to vote to be weaker and poorer. That will never be forgotten – nor forgiven.”

Sir John is among a host of former senior politicians, including Tony Blair, and ex-deputy prime ministers Lord Heseltine and Nick Clegg, stepping up calls for another referendum.

They have written a series of articles in European newspapers backing a so-called People’s Vote, with the option to remain in the EU.

Sir John’s remarks were met with barbed responses from Jacob Rees-Mogg and other Conservative Brexiteers who said he had compromised the UK’s sovereignty by signing up to the Maastricht treaty in the early 1990s without consulting the people.

Elsewhere, while some of Mrs May’s MPs have urged her not to pay any money to the EU unless a deal is struck, Chancellor Philip Hammond – who backed Remain – is understood to have told the cabinet the UK could face a big bill at the end of any transition period even if none reached.