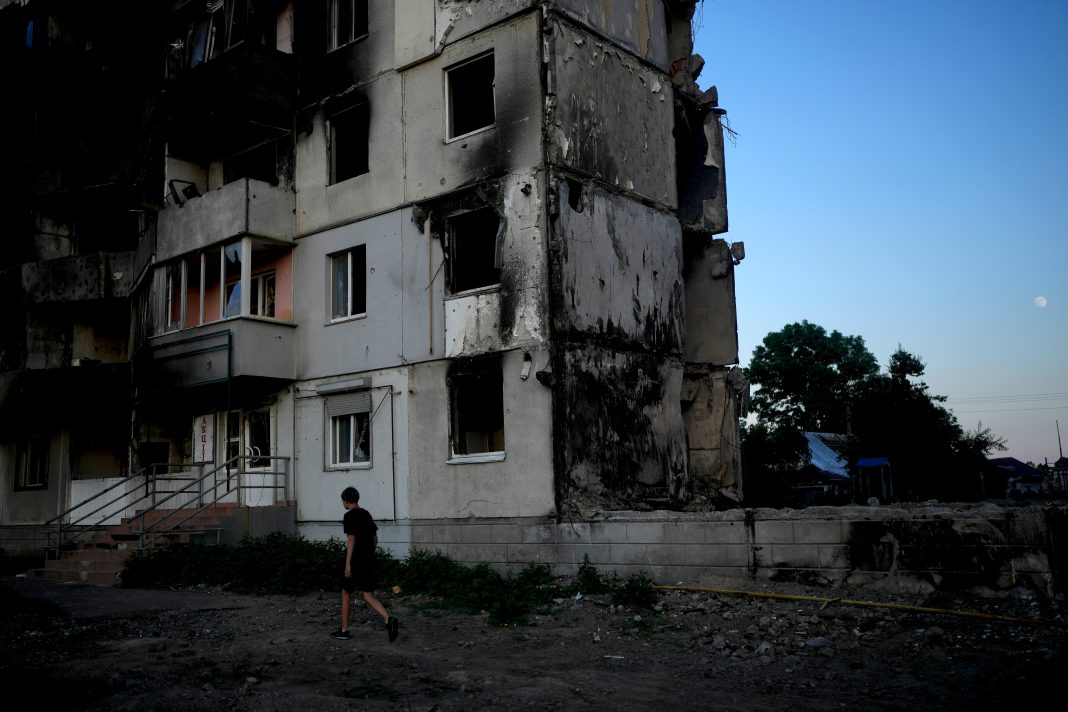 The head of the self-proclaimed Donetsk People’s Republic sees no reason to pardon two British nationals and one Moroccan sentenced to death after their capture while fighting with the Ukrainian army.

On Thursday, the Donetsk Supreme Court sentenced Shaun Pinner and Aiden Aslin, as well as Moroccan Saadoun Brahim, to die by a firing squad for participating as mercenaries on the side of the Ukrainian armed forces. Prosecutors said the men pleaded guilty to all charges.

“First, I should be guided by the court decision,” separatist leader Denis Pushilin said. “By the nature of those articles, those offenses that they committed, I see no reason, no prerequisites for me to come out with a decision toon pardon them.”

Pinner’s family issued a statement saying they were “devastated and saddened at the outcome of the illegal show-trial.” They described Pinner as a Ukrainian soldier, not a mercenary, and said he should be treated like a prisoner of war, not a criminal.

“We sincerely hope that all parties will cooperate urgently to ensure the safe release or exchange of Shaun,” the statement said. “Our family, including his son and Ukrainian wife, love and miss him so much and our hearts go out to all the families involved in this awful situation.”

USA TODAY ON TELEGRAM:Join our Russia-Ukraine war channel to receive updates straight to your phone

►Mexico’s president called NATO’s policy on the Russian invasion “immoral.” President Andrés Manuel López Obrador said Monday that the policy was equivalent to saying “I’ll supply the weapons, and you supply the dead.”

►Ukrainian authorities have opened criminal investigations into the killings of more than 12,000 people during Russia’s invasion.

►China has overtaken Germany as the biggest buyer of Russian energy exports. The Centre for Research on Energy and Clean Air said Monday that Russia received about 93 billion euros in revenue from the sale of oil, natural gas and coal since the Feb. 24 invasion – 12.1 billion euros from Germany, 12.6 billion euros from China.

►Andriy Pokrasa, 15, and his dad, Stanislav, are being hailed in Ukraine for their volunteer aerial reconnaissance work after using their small drone in the early days of the Russian invasion, pinpointing coordinates and swiftly messaging the precious information to the Ukrainian military.

A Russian official who questioned the invasion into Ukraine months ago has been dismissed from her job as deputy chief of the agency that deals with international humanitarian cooperation, Russian media reported Monday. Natalia Poklonskaya, a Russian politician born in Ukraine’s Luhansk region, said in a Telegram post that she was transferring to an unidentified post and thanked Russian President Vladimir Putin “for his support and trust.”

In April, Poklonskaya questioned the popularity of the letter “Z” in Russia, representing the war effort. She said the war meant many deaths and, for many families, sorrow.

“This letter Z symbolizes tragedy and grief for both Russia and Ukraine,” she said.

Russian President Vladimir Putin will discuss the impact of sanctions on global energy and food prices at the St. Petersburg International Economic Forum that opens Thursday. More than 100 nations are expected to be represented at the gathering, Russian organizers say. The U.S. will not be among them.

“We urge governments and companies to join our boycott and send a clear message that there is no ‘business as usual’ while Russian forces brutalize Ukraine,” State Department spokesman Ned Price said in a Twitter post. Egyptian President Abdel Fattah Saeed Hussein Khalil el-Sisi will be the primary guest of honor. Russian officials said representatives from business unions of Italy, Canada and France also are expected to participate.

“The president feels comfortable communicating with both foreign and Russian reporters,” Peskov told state-run Tass. But he added that “the sanity of many prominent Western reporters is currently raising questions, at least for us, and we wouldn’t call them true and unbiased journalists, because all of them have simply gone nuts.”

Russian forces have intensified an artillery-supported assault on the embattled city of Sievierodonetsk and have pushed the Ukrainian troops out of central neighborhoods, the Ukrainian military said Monday. The city is one of just two cities in the Luhansk region of the Donbas that Russia does not completely control. Regional governor Serhiy Haidai said the Russians aim to encircle Sievierodonetsk, destroying bridges that connect to the city center. He said mass evacuations are impossible because of shelling and that the military manages to evacuate only a few people a day.

“The Russians are making every effort to cut off Sievierodonetsk,” Haidai said. “The next two or three days will be significant.”

Leonid Pasechnik, head of the self-proclaimed Luhansk People’s Republic, said the Ukrainians making their stand in Sievierodonetsk should save themselves the trouble.

“If I were them, I would already make a decision” to surrender, he said. “We will achieve our goal in any case.”

The Russians have been leaning on their superiority in troops and artillery to make considerable headway in the industrial Donbas region of eastern Ukraine but will probably need to replenish their forces, according to a British intelligence assessment.

“Russia will likely have to rely on new recruits or mobilized reservists to deploy these units to Ukraine,” said Sunday’s assessment, tweeted out before the ministry posted a map of Ukraine highlighting the territory controlled by Russia in the east and south. It’s a large chunk, including most of the Donbas, where the sides continue to wage a ferocious battle for the crucial city of Sievierodonetsk in the Luhansk province.

British and Ukrainian officials have warned that Russia is using imprecise weapons that can cause mass casualties as they try to gain terrain in a region that could provide them a land corridor to the Crimean Peninsula, which they illegally annexed in 2014.

An adviser to the president of Ukraine, said his country needs 1,000 155 mm howitzers, 300 multiple rocket launch systems, 500 tanks, 2,000 armored vehicles and 1,000 drones to win its war against Russia. Mykhailo Podolyak said his country is “waiting for a decision” from NATO defense ministers meeting Wednesday and Thursday in Brussels. Ukraine’s cities have been bludgeoned by Russian rockets and mortar for months, resulting in the loss of thousands of civilian lives and destruction of hundreds of homes and businesses.

“I will be straightforward. To end the war and throw Russia out of Ukraine, we need heavy weapons parity,” Podolyak said on Twitter.

The Security Service of Ukraine has detained a spy who it says leaked the position of the Ukrainian military in the Kharkiv region to the Russians. The spy, detained in the suburbs of Kharkiv, is a local resident who was recruited via the Internet.

The government says the man, on the instructions of his Russian handler, recorded the location of Ukraine military units and other military formations in the region. Among other intelligence, the Russians were interested in the coordinates of Ukrainian checkpoints and military fortifications, the government says. If convicted, the man could face 12 years in prison.

McDonald’s successor – ‘Tasty and That’s It’ – opens in Moscow

McDonald’s restaurants reopened across Moscow on Sunday, minus the name and American ownership but packing the same menu that drew big crowds to 850 outlets across Russia.

McDonald’s suspended operations at all 850 of its eateries in Russia on March 14, less than three weeks after Russia invaded Ukraine. Two months later McDonald’s announced it was withdrawing from Russia, 32 years after opening its first location in Pushkin Square. McDonald’s sold the business to Russian businessman Alexander Govor.

The chain kept the previous workers and menu but changed the names. Fifteen restaurants reopened in Moscow and about 200 will be open by month’s end, Govor said.

“This is a historic place – the flagship of McDonald’s,” Govor told reporters. “I’m sure it will be the flagship for us.”