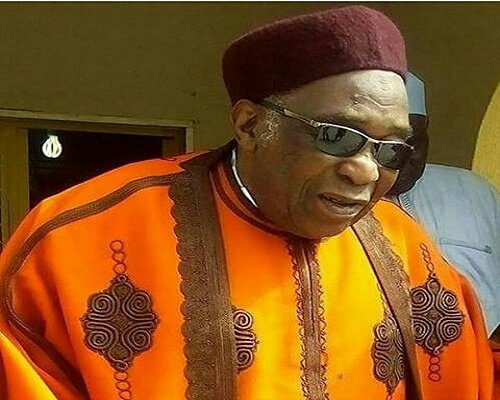 Reports indicate that the body arrived the Nigeria at around 1:54 p.m and would be conveyed to Kano aboard a presidential jet.

The reports also said that the duo of the Chief of Staff to President Muhammadu Buhari, Abba Kyari who led a presidential delegation to the funeral, alongside the Senate President, Dr. Bukola Saraki received the corpse through the Egypt Air tarmac from the presidential wing.

Recall that the Acting President Yemi Osinbajo had earlier today named Chief of Staff to the President, Malam Abba Kyari, as the head of the Federal Government delegation to the funeral of Alhaji Maitama Sule.

Mr. Laolu Akande, the Senior Special Assistant to the President on Media and Publicity (Office of the Vice-President) had made this known on his twitter handle on Tuesday in Abuja.

Other members of the delegation, according to Akande, include the Minister of Interior, retired Abdulrahaman Danbazau; Minister of Mines and Steel Development, Dr Kayode Fayemi and the Minister of Water Resources, Suleiman Adamu.

The presidential aide revealed that the Accountant General of the Federation, Alhaji Ahmed Idris and some government functionaries were part of the delegation.

The delegation is to submit President Muhammadu Buhari’s letter of condolence to Gov. Abdullahi Ganduje of Kano State.

The President’s letter reads thus: “I have heard this morning, the death of the venerable Alhaji Maitama Sule, Dan Masanin Kano, and one of Nigeria’s famous sons. Although, I knew he was in poor health for some time, his death nonetheless, came as a profound shock.

“As a Minister in the First Republic, he was one of those who assisted our Founding Fathers, Dr Nnamdi Azikiwe, Chief Obafemi Awolowo, Alhaji Ahmadu Bello and Alhaji Abubakar Tafawa Balewa, to fashion Nigeria politically and lay the grounds of national co-existence.

“Maitama Sule was blessed by God with a wonderful voice and outstanding eloquence. He served with distinction in the First Republic, the Second Military regime, as well as the Second Republic, without him being tainted with the remotest hint of scandal.

“As a person, I found him personable with unceasing good humour. Nothing personified his faith more than the fact that on losing his sight, he did not retreat in himself sulking on account of his ill-fortune.

“Quite to the contrary, he honoured virtually all invitations extended to him and spoke as usual with singular eloquence and unparalleled wit.

“In my discussions with him, I greatly valued his counsel, and I never ceased to be amazed by his concern for the well-being of his country rather than his personal interests.

“Let me extend my sincere condolences to Your Excellency, family and friends, the Government and people of Kano, and Nigerians as a whole, for this most heavy loss. We shall not soon see the like of him.

“May God forgive his sins and admit him to Paradise, Amin.’’

The deceased statesman, aged 87, who died in the early hours of Monday in a hospital in Cairo, Egypt, will be buried in Kano today at 4:00 pm.