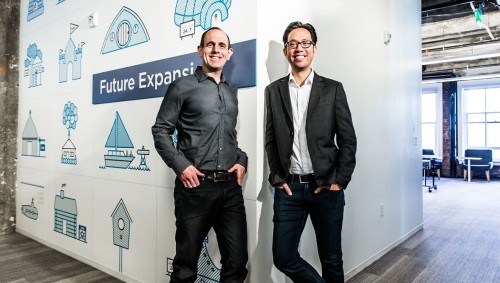 The New York company launched earlier this year with the intent of reimagining farming. It is part of a growing number of startups that believe the future of agriculture won’t be found in sprawling fields lined with crops but in warehouses in city centers where produce is grown vertically.

“What is great about this model is that we are able to build our farms in any city,” said Irving Fain, co-founder and CEO. “Our goal is to locate these farms in a way to provide the highest quality food to cities where it has traveled a very short period of time compared to the traditional agriculture supply chain where it can be two to three weeks from when our food is picked to when it reaches us.”

With the move towards urbanization and demand for local, organic food continuing to increase, the vertical farm market is expected to grow to $5.8 billion by 2022, according to Research and Markets.

Bowery already has one vertical farm located outside the city of Kearny, N.J. and is working to build its second in the Tri-State area.

The driving force behind its business model is the integrated technology system it developed to create ideal conditions for growing herbs and leafy greens year-round. Using vision systems, automation technology and machine learning, it can monitor the crops and all the inputs that drive their growth. As a result, Bowery is able to use 95 percent less water and no pesticides. It also says its precision approach allows it be 100 times more productive on the same footprint of land than traditional agriculture.

While vertical farms have less of a physical footprint, they rely on artificial light and can be quite energy intensive. But Fain notes that as lights become more efficient and renewable energy evolves, these farms will demand less power.

Interest in food and agriculture startups has been on the rise in recent years. In 2016, companies in the space received $3.2 billion in venture capital funding, which was down 30 percent from a high of $4.6 billion in 2015, according to AgFunder, an online investment platform for food and agriculture technology. While the number of dollars invested in the space declined, commensurating​ with the overall venture pullback, the deal flow was at its strongest with 580 deals closed last year.

Bowery finds itself competing against the well-funded startup, AeroFarms. It has received $95.8 million to transform a 70,000-square-foot steel mill in Newark, N.J. into the world’s largest indoor vertical farm.

Despite the enthusiasm for vertical farms, they are not likely to completely replace traditional farming practices anytime soon. There is still a very limited range of crops being grown in these towers with the companies in the space focusing on lettuces and herbs to start.

“Leafy greens make a lot of sense from the standpoint of being able to grow them quickly, grow them at a high quality and being able to sell a large portion of what we grow into the market,” said Fain. “We knew we could make it work economically and build a really healthy business that was going to put us in a position to innovate into other areas.”

At present, Bowery offers a half dozen products that ​include ​baby kale, Bowery ​blend, ​butterhead lettuce, ​arugula, ​k​ale ​mix and ​basil​.​ The products are​ ​available at select Whole Foods and Foragers stores in the Tri-State area and featured on the menus of Tom Colicchio’s New York restaurants Craft and Fowler & Wells.

And while Fain sees a possibility to build a big business, he is enthused by the company’s opportunity to provide fresh food to people in a more efficient and sustainable way.

“I am a bigger believer of the innovation economy and in our ability to solve difficult problems, he said. “I wanted to spend my time solving a problem that not only mattered to me personally, but I felt was important on a larger scale.”

Share
Facebook
Twitter
WhatsApp
Pinterest
Linkedin
ReddIt
Email
Print
Tumblr
Telegram
Mix
VK
Digg
LINE
Viber
Naver
Previous articleThe CEO of a $34 Billion Company Gave Me This Advice on How to Be a Better Leader
Next articleThis Non-Profit Trains Anyone to Box for a Cause, Rethinking Competition and Resilience Along the Way (Podcast)