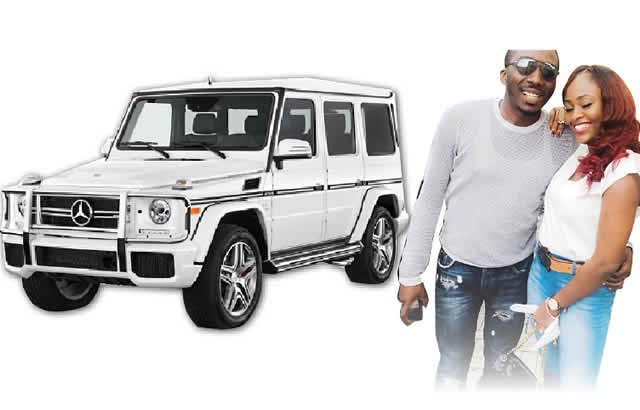 His real name is Abovi Ugboma but most people know him by his stage name, Bovi. He is no doubt one of those who had been in the entertainment industry for a long time and in fact, he had been in the business of comedy even before it became a profitable venture.

In spite of the influx of many young talents into the comedy industry, Bovi is still a huge force to reckon with, coupled with the success of his own comedy show, Man on Fire. He held the third edition of the show few months ago, after the show went on two years break.

Days after the show, which was attended by a huge crowd, Bovi bought a Mercedes Benz G-Wagon sport utility vehicle for his wife, Kris. In the auto market, the G-Wagon AMG, which is an advanced trim level of the normal G550, cost him tens of millions of naira. And in spite of its huge cost, at least compared to its competitors, the G-Wagon is like a must-have for many.

Looking for a sport utility vehicle that has a bold styling, an impressive outlook, excellent on- and off-road capabilities, reliable, intimidating appearance, powerful engines and one that would make an instant statement, the Mercedes Benz G-Wagon should be on top of your list.

Even though some users expressed reservations about its poor fuel economy, they still admit that the G-Wagon is a vehicle to own, and it is even more so that it excels where the pavement ends.

To say the G-Wagon is versatile is a wild understatement; it’s also an icon of prosperity that is perhaps uniquely resistant to rational analysis.

The G-Wagon is a refined square, it’s heavy, it steers and rides like the decades-old military vehicle that it is, and people love it anyway and Mercedes has done an admirable job of polishing the agonizingly old design with modern features.

Its off-road capability inspires confidence and it can be guided through just about anything nature throws at it, and more importantly, the steering wheel rarely registers the impact. Thus, the driver is in a comfort mode.

The AMG gets an AMG-tuned seven-speed automatic transmission, which distributes power to all four wheels through a full-time four-wheel-drive system with a low-range transfer case. Also included are electronically locking front, center and rear differentials for off-road use.

In Edmunds track testing, a G 63 moved to 60 miles per hour in just 5.3 seconds, which is not bad for a three-ton SUV. Despite the added power and performance, the G 63 achieves the same fuel economy as the G550, with Environmental Protection Agency-estimated 12 miles per gallon in the city, 14mpg on the highway and 13mpg in combined driving. Not even its auto-stop-start system could help to improve its fuel economy estimates.

In Edmunds brake testing, the G 63 posted a 120-foot stop from 60 miles per hour, with negligible fade after repeated hard braking, an astonishing performance for a 5,934-pound vehicle.

The good: It has ample headroom, excellent off-roader and muscular engines. Regardless of its weight, it reaches highway speed effortlessly and it even has sports car-like acceleration.

The bad: Surprisingly, it comes short in terms of storage and cargo space. Some described it as an unsettling ride for luxury class; cumbersome and difficult to handle on pavement and few driver-assistance technologies.