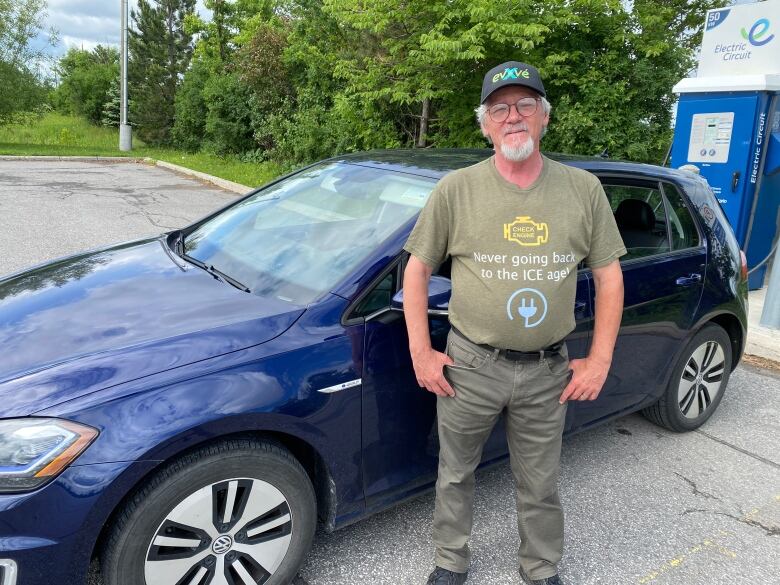 Unlike the U.S. and Europe, Canada doesn’t currently require electric EVs to generate sound when travelling at low speeds.

Transport Canada proposed a requirement that all hybrid and electric cars require mandatory sound emitters when travelling at low speeds in April 2021. This regulation is positioned to take effect in 2023, but this regulation allows manufacturers to pick their own sounds.

While minimum standards would need to be met, “manufacturers would be free to choose what type of sound they apply to their vehicle,” wrote Transport Canada in an emailed statement.

Vehicles without internal combustion engines make little noise other than the sounds of wind resistance and the rubber tires against the road. On a city street with ambient noise, they can be impossible to audibly detect.

Canadian National Institute for the Blind (CNIB) regulatory affairs manager Lui Greco says that blind and partially sighted people depend on the distinct sounds of vehicles to safely navigate.

Without those recognizable cues, he says many blind or partially sighted people will be afraid to go out in the community. The pedestrian warning sounds required for EVs need to be standardized, he said.

“City streets are busy, noisy, hectic environments … so it’s essential that whatever sound an electric vehicle makes as it’s slowing down or speeding up is identifiable.”

Greco says these regulations could also benefit cyclists and people who may be distracted while walking. Making EVs louder help grab the attention of “anyone who may not necessarily be looking at traffic,” he said.

‘They really can’t hear me’

Many of the EVs currently on Canadian roads do generate some sort of sound at low speeds or when backing up — but many older models don’t have these features.

Mark Cayer said his EV is so silent that it worries him. Cayer’s 2018 Volkswagen e-Golf doesn’t have any sort of audible pedestrian safety measures. He started rolling down the windows and turning up the radio to make up for this.

“For people who are hard of sight, people who are blind and walking … it’s possibly very dangerous to not be able to hear the car at all,” said Cayer, who is a member of the Electric Vehicle Council of Ottawa.

Cayer said switching to an EV has prompted him to become a more conscientious driver.

“I’m always watching for pedestrians and watching for people coming up on a bicycle from behind. I’m cognizant of the fact that they really can’t hear me.”

He said it should be mandatory for EVs to emit some sort of sound at slow speeds to warn pedestrians.

Paul Camire drives for Uber in his 2017 Chevrolet Bolt EV. He said his car has a pedestrian sound alert speaker that activates at low speeds.

“Under 20 kilometres an hour, it sounds like a shushing sound.”

Camire, who spends the majority of his day driving at low speeds while ferrying his passengers around Ottawa, said he disabled the sound because it bothered him.

He added that a part of the reason he bought an EV was to avoid contributing to “noise pollution.” Consistent, excess noise, such as that caused by gas cars, can have negative impacts on people and wildlife over time.

Camire says he doesn’t agree with the proposed regulations, but that he would support voluntary alerting features like pedestrian horns.

Pedestrian horns emit more of a short chirp than standard horns and are intended to audibly warn pedestrians in a non-startling manner. “I really, really like that concept and I wish more cars would have just adopted that instead of the mandatory noisemaker.”

“We had the same discussion when seatbelts became mandatory,” said Greco. “The lives of pedestrians and other vulnerable road users could be compromised by them simply choosing to turn off their [pedestrian warning] system.”

As Ottawa is on track to become what is believed to be the first place to require pedestrian warning sounds on e-scooters, Greco said he hopes that regulators seek feedback from people who are blind during the initial introduction of the regulations.