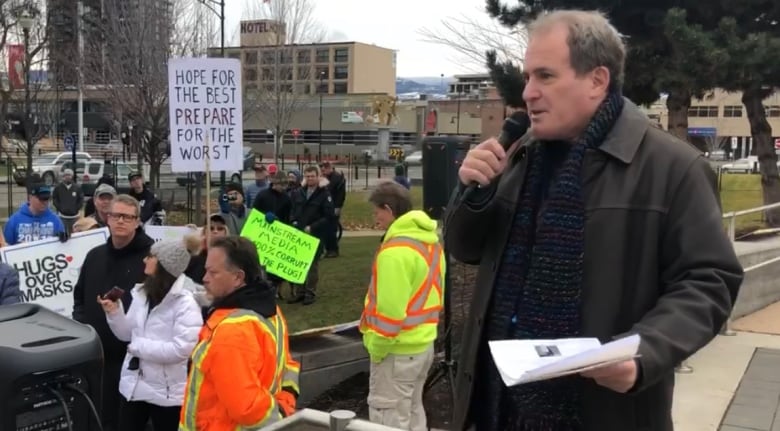 The anti-vaccine movement in Canada is becoming increasingly radicalized thanks to a bizarre legal theory spreading through its ranks, according to multiple experts.

The documents are based on the ideology of the Freemen-on-the-land, an anti-government movement with links to white nationalism.

“This is very worrying,” said Edwin Hodge, an expert on right-wing extremism at the Centre for Global Studies at the University of Victoria.

The pseudo-legal ideas of the Freemen have ebbed and flowed over the years, but the philosophy has typically been relegated to the fringes of society, according to experts.

Not anymore. The pandemic and its associated opposition to public health measures have vaulted these ideas into the public eye.

“It’s been a bonanza,” said Richard Warman, an Ottawa human rights lawyer who has written extensively on pseudo-law.

David Lindsay, a prominent anti-vaccine mandate protester in Kelowna, B.C., is also a well-known follower of the Freemen-on-the-land ideology, according to legal scholars, and has used rallies in the Okanagan to spread it. CBC News reached out to Lindsay for comment but did not hear back in time for publication.

The convoluted legal principles being spread by Lindsay and others arose in the white supremacist Posse Comitatus movement in the United States in the early 1970s, according to Helmut-Harry Loewen, a retired sociologist in Winnipeg and an expert on the Freemen.

Loewen says they espouse a radical interpretation of the relationship between citizens and government, claiming that explicit individual consent is required for every bureaucratic interaction — from speeding tickets, to taxes, to criminal charges, to public health measures.

When adherents encounter law enforcement, they exclaim “I do not consent,” which they claim frees them from legal obligations. (It doesn’t, according to lawyers.)

That line has been adopted by some anti-vaccine activists — appearing everywhere from protest signs to frames on Facebook profiles, though it isn’t always clear whether those activists follow Freemen ideology or have, perhaps, just borrowed the phrase.

According to Hodge, the most dedicated Freemen followers issue reams of bogus legal documents in the belief that once the true law is recognized, public officials will be held accountable.

In British Columbia, activists have insisted on hand-delivering so-called “notices of liability” to public officials, including mayors, city councillors and school principals.

The recent incursion into a school was “a dramatic escalation,” said Hodge, and indicates that activists are willing to breach previously sacrosanct public spaces.

“This is an intimidation tactic,” he said.

“They see themselves as the only legitimate law enforcement around because they perceive everybody else to be puppets or stooges or in on the conspiracy.”

The legal profession takes a dim view of such tactics.

“People delivering notices of liability might as well be delivering their grocery list,” said Warman. “These documents are 100 per cent false. These have never worked and have never been accepted in any court.”

Canadian courts have repeatedly ruled against such pseudo-legal arguments and have deemed many Freemen to be “vexatious litigants,” meaning they need special dispensation from the courts to file lawsuits.

Followers of pseudo-law have a pattern of escalation, according to both Hodge and Warman.

“They don’t just post things on Facebook saying, ‘I do not consent,'” said Hodge. “First, they’re declaring the government unconstitutional, then it’s issuing false notices, then they’re making citizen arrests, and then it escalates into violence.”

“These theories may run away faster than the truth,” said Warman. “It’s important to deal with [extremism] at the lowest possible level before it grows. It starts with education and debunking.”

On Thursday, Quebec passed a law meant to keep protests away from schools and hospitals. B.C. Premier John Horgan said last week that B.C. is looking to do the same.

“It’s something that we don’t do lightly but we do in the interests of the vast majority of British Columbians who want to know that they can go about their business free from intolerance of a select few,” he said.

A bizarre pseudolegal theory is spreading through the anti-vaccine movement. Experts say that increases the likelihood of radicalization and violence. The CBC’s Chris Walker reports. 10:53