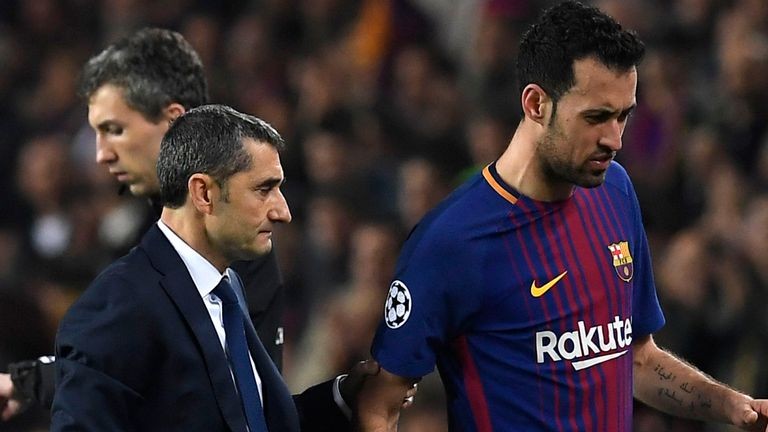 Sergio Busquets is facing a injury lay-off that could rule him out of Barcelona’s Champions League quarter-final first leg.

The midfielder hobbled off with a foot problem during the second half of his side’s 3-0 win over Chelsea on Wednesday – a result that ensured the La Liga leaders progressed with a 4-1 aggregate victory.

Barcelona will find out their last-eight opponents in Friday’s draw but after scans revealed a hairline fracture, Busquets’ participation in that tie appears in doubt.

“Tests have confirmed that Sergio Busquets has a hairline fracture on the fifth toe of his right foot. He will be out for approximately three weeks,” Barcelona said in a statement on Thursday.

Busquets, who was replaced by Andre Gomes, is due to miss league games at home to Athletic Bilbao on Sunday and away to Sevilla on March 31, as well as Spain’s international friendlies against Germany and Argentina.

But the prognosis means he faces a race to be fit for the Champions League’s next knockout stage, with the first leg games scheduled for April 3 and 4, and the return fixtures set for April 10 and 11.