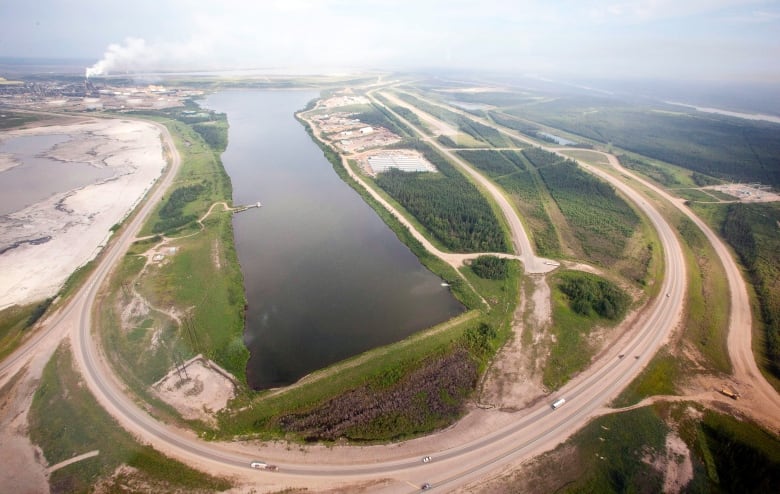 The federal government has begun developing regulations to allow oilsands operators in northern Alberta to begin releasing treated tailings water back into the environment, something that’s been prohibited for decades.

Currently, companies must store any water used to extract oil during the mining process because it becomes toxic. The massive above-ground lakes are known as tailings ponds, which are harmful to wildlife and have resulted in the death of birds who land on the water, on multiple occasions.

For years, local Indigenous groups have raised concerns about contamination from development, and how tailings ponds could further pollute their land and drinking water.

But now, industry leaders and some scientists are convinced the water can be treated enough so it can be safely discharged and they say it can reduce the environmental risk of storing an ever-increasing volume of tailings.

Something’s got to give

For decades, oilsands companies have used freshwater to help separate the oil from the sand and other materials found in mines.

Over the years, the industry has improved its techniques to recycle more and more of the water it uses. Still, mines require about three to four barrels of new water to produce one barrel of bitumen.

After the water is used, it is stored in tailings ponds since the material contains various toxins, bitumen residue and elevated levels of salt.

The tailings ponds in northern Alberta, adjacent to oilsands mines, store about 1.4 trillion litres of waste water. That’s the equivalent volume of more than 560,000 Olympic-sized swimming pools, which would stretch from Edmonton to Melbourne, Australia, and back if placed end-to-end.

“The biggest challenge is that we have a massive amount of water that needs to be treated,” said Mohamed Gamal El-Din, a University of Alberta professor who specializes in oilsands tailings water treatment.

In order to return tailings ponds water to the environment, the water does not need to be clean enough to drink, he said, but safe enough to meet the government’s forthcoming standards. It’s similar to how towns and cities across the country treat sewage to the point where it can be released to the environment.

In both situations, Gamal El-Din said the fluids can be purified to a point where it can be drinkable water, but municipalities and industry have deemed that too costly.

“There are technologies that can do that,” he said, but “it’s not economically feasible.”

A Crown-Indigenous working group has been working on the creation of oilsands tailings water release standards  since the beginning of the year and the federal government wants to release the draft regulations in 2024 and final regulations in 2025, under the Fisheries Act.

In a statement, Environment and Climate Change Canada said allowing treated wastewater to be released “will help slow the growth of oil sands tailings ponds, and reduce the associated environmental and health risks” of storing the toxic material.

The risk of the status quo

Some experts are quick to point to examples in some other countries where harmful mining water was unexpectedly released because infrastructure failed, including a dam disaster in Brazil that killed 270 people.

They argue that continuing to build more tailings ponds in the oilsands region only heightens the risk of an unexpected release, which could damage the environment even more.

Currently, companies that are polluting water have to keep building more tailings ponds and hold the fluid in perpetuity.

“This scenario is not tolerable,” said Les Sawatzky, a Calgary-based water resources engineer who has worked on projects around the world, including with oilsands companies.

Toxins, salt and hydrocarbons are all found in the waste water from oilsands mines

There is no simple solution to treating the tailings water, but progress is being made, says Lesley Warren, a professor with the University of Toronto’s department of civil and mineral engineering. She’s spent almost a decade studying Syncrude’s pit lake, which the oilsands company created by filling an empty mine pit with tailings and capped with fresh water. 4:44

Others point to the recent flooding in British Columbia, and the way that natural disaster has caused a mess with various harmful materials like fertilizer and fuels, as a reason why a potential discharge of treated oilsands tailings water is preferable to just letting the tailings ponds continue to grow.

“If the oilsands release is controlled and satisfies the appropriate criteria, then I would have more comfort than something that’s a huge phenomenon and uncontrolled at the moment,” said Greg Lawrence, an engineering professor at University of British Columbia in Vancouver, who has researched water and tailings in the oilsands since 2013.

“There’s been flooding in the Fraser Valley and that is of a far greater concern, I would say, than any regulated and controlled release,” he said.

Oilsands operators are required to clean up the land they disturb and return it to a state similar to how it was before development began. The industry argues those remediation efforts are prolonged by decades without the ability to release treated tailings water.

“The more water that’s stored on site, the less of the site itself is able to be reclaimed until there’s an opportunity to release water and free up that space,” said Brendan Marshall with the Mining Association of Canada.

Marshall is confident the industry will be able to meet the standards created by regulators and the focus should be on achieving water quality, rather than concerns about the volume of tailings that exist.

“If you have a lot of water that can be safely treated to an acceptable threshold then gradually releasing that water over time will do that river no harm,” he said.

Some Indigenous and environmental groups aren’t convinced and are concerned the tailings water release will cause even more harm to the Athabasca River which flows northeast from Jasper National Park through the oilsands region before emptying into Lake Athabasca.

The river is considered the lifeline for many communities.

First Nations and Métis Nations have complained for years how the oilsands, as well as other industries, have caused water volumes and quality to drop, which they say has caused fish populations to decrease sharply over the years and some species to disappear.

Research has found elevated cancer rates in Fort Chipewyan, a community located north of Fort McMurray on the western tip of Lake Athabasca, and high levels of heavy metals, such as mercury, and arsenic in animals that are hunted and consumed in the region.

“I’m angry that we have to be having this discussion of what do we want to happen,” said Jesse Cardinal, executive director with Keepers of the Water, an Indigenous environmental group.

“The fact that they’re even entertaining releasing the tailings ponds into the Athabasca River — this is an international human crime,” she said from her home in the Kikino Métis Settlement, about 175 kilometres northeast of Edmonton.

She feels like communities are stuck because they oppose the release of the tailings water, but the status quo is also unacceptable because of the seepage and dam failure risks of tailings ponds.

Cardinal doesn’t understand why the oilsands sector is allowed to expand operations and cause more tailings while this issue remains unresolved.

“We know that the industry has other options to treat the tailings ponds, but they cost a lot more money. We’re saying do what’s right, not what’s fast and easy,” she said.

The Fort McKay First Nation is surrounded by nine different oilsands mines and 20 tailings ponds. The community is one of nine First Nations and Métis Nations in the Athabasca region who are part of the federal government’s working group to discuss potential impacts to Treaty and Indigenous rights.

Releasing mine waste water is a major concern for the community, said Bori Arrobo, Fort McKay’s director of sustainability.

“We don’t want to swap one environmental liability, which is the tailings ponds at the moment, for another, which could be the deterioration of the quality of the water in the Athabasca River and the downstream,” he said.

“It’s important to be able to participate at all the tables where these discussions are happening.”

No silver bullet to treat tailings

While the federal government develops regulations, the industry is testing various chemical and biological methods of treating tailings water.

The trick is to find the most effective methods that are also cost-effective and don’t produce other environmental impacts, like more greenhouse gases.

“In other words, it treats the water the way you want it to, but it doesn’t have any of these other ancillary effects that no one wants,” said John Brogly, the water director for Canada’s Oil Sands Innovation Alliance (COSIA).

In 2020, there were 57 active research projects through COSIA at a cost of $150 million and an additional 86 projects focused on water.

One technique to clean up oilsands mine waste water is similar to using a Brita water filter, says expert

John Brogly is the water director for Canada’s Oil Sands Innovation Alliance (COSIA). In 2020, there were 57 active research projects through COSIA at a cost of $150 million and an additional 86 projects focused on water. 4:52

There are different obstacles to overcome in treating tailings water, mainly the toxicity and the salinity.

As the industry has become better at recycling water, the salt levels increase every time the water is used in the extraction process. Similarly, the water quality degrades the more it is re-used.

The tailings water also contains thousands of different naphthenic acids and other organic compounds, some of which are harmful to aquatic life.

Much more intensive research is needed to develop treatment technology and to help craft regulations to release tailings water, said Lesley Warren, a professor with the University of Toronto’s department of civil and mineral engineering. She’s spent almost a decade studying Syncrude’s pit lake, which the oilsands company created by filling an empty mine pit with tailings and capped with fresh water.

Canadians across the country should care about the environmental issues surrounding the oilsands, Warren said, since everyone consumes products that come from oil.

“We have to recognize that our way of life is founded on all of these resources that we’re mining and so, we’re part of this discussion,” she said.