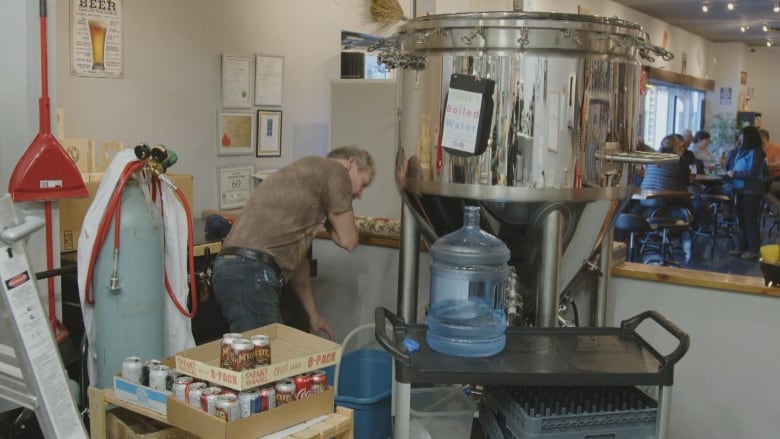 British Columbia’s Ministry of Health is warning residents in Metro Vancouver and the Fraser Valley of possible water contamination connected to the recent flooding in the province.

Officials say heavy rain may have caused overflow or failure of liquid manure storage systems in the region. The province says it is working with farm operators to reduce the risks of possible overflow.

The province says private drinking water wells may be at risk, and owners need to assess their wells and ensure anyone using them is protected from contaminated water.

The city of Merritt, B.C., which suffered significant damage during the flooding, remains on a boil water advisory as residents, all of whom were evacuated, return home.

A local brewery is working to ease the strain on the community by boiling on average about 150 litres of water a day.

Kyle Hall, co-owner of Empty Keg Brewhouse Ltd., has been using his beer fermentation tanks to boil water, and has been offering it to residents for free.

“Lots of people coming in and using it,” he said. “It’s been huge.”

“It’s just a little thing we can do.”

Kyle Hall who runs a Merritt brewery is using his beer fermentation tanks to boil massive amounts of water which he is offering up for free to residents. Just one example of the community pulling together through this flooding disaster. ⁦ <a href=”https://t.co/XtpL3XXtm2″>pic.twitter.com/XtpL3XXtm2</a>

For the whole month of December, he’s also donating $1 from every beer sale to flood recovery efforts.

“We’re just a very small cog in the wheel, there’s so many other things that are happening in the city that are important, but if we can do a little bit, we’ll do it,” Hall said.

Deputy Mayor Kurt Christopherson posted a video update for residents on Facebook Sunday, and said teams are working to ensure the city can remove the boil water notice as soon as possible.

The B.C. government also announced on Sunday that it is expanding financial assistance for those impacted by flooding and landslides over the past few weeks.

Those eligible include anyone living in the northwest, southwest, central and southeast areas of the province, including Vancouver Island, who suffered loss because of the severe weather in B.C. from Nov. 15 to Dec. 2. It includes all homeowners, residential tenants, business owners, farmers and charitable organizations that did not have access to insurance to cover those costs.

The province’s disaster financial assistance will cover up to 80 per cent of the amount of total eligible damage over $1,000, up to $300,000.

The Canadian Red Cross has also been providing assistance of up to $2,000 to those forced to evacuate their homes from Nov. 14 to 16 because of flooding.

The Trans Mountain pipeline has restarted after being shut down for three weeks, which will eventually bring relief to parts of the province dealing with gas shortages.

The pipeline was shut down as a precaution amid concerns about safety during flooding, and landslides exposed sections of the 1,150-kilometre pipeline that carries 300,000 barrels per day of petroleum products from Alberta to B.C.

Trans Mountain Corp. said it continues to monitor the pipeline on the ground, by air and through its control centre.

WATCH | Scale of destruction in Merritt, B.C., is staggering:

With some evacuation orders lifted, residents are returning to flood-damaged homes in Merritt, B.C., for the first time since mid-November, only to see the devastation and daunting cleanup job ahead. 2:52

The provincial government has extended fuel restrictions, which include the south coast, Vancouver Island and Gulf Islands, until Dec. 14. The rationing applies to both gas and diesel and limits buyers to 30 litres per trip to gas stations and fuel suppliers in the aforementioned areas.

The rail line was shut down mid-November as heavy rain triggered landslides along the rail line, causing at least one train derailment.

A CN spokesperson said the company will continue to monitor rail infrastructure in coming days and weeks.