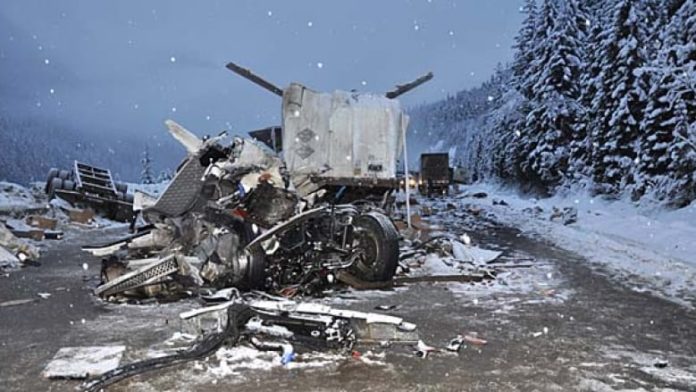 The mayor of Revelstoke, B.C., has a unique perspective on just how deadly Highway 1 can be.

Gary Sulz has come face-to-face with some of the people killed on the highway between the city and Golden, B.C.

The 150-kilometre stretch of highway cuts through the Selkirk Mountains and includes Rogers Pass, a national historic site with an elevation of 1,330 metres.

While Sulz has been mayor for only a couple of months, he’s been a funeral director in town for nearly three decades. During that time, he’s been called out to dozens of fatal crashes.

“These are things I see on a regular basis,” said Sulz. 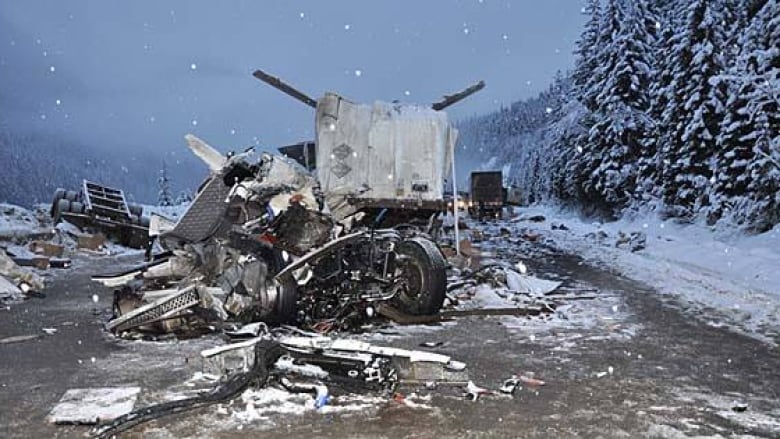 Two men were killed in the accident involving three trucks in February 2010, about 25 kilometres east of Revelstoke, B.C. (RCMP)

The RCMP say that this year, to the end of November, they’ve been called out to 364 collisions and 14 fatalities on a 140-kilometre stretch of the Trans-Canada between an area east of Craigellachie to east of Rogers Pass.

Sulz is hoping the B.C. government’s new chain-up regulations for big commercial vehicles will make the highway safer. It’s now mandatory for truckers to carry chains on the Trans-Canada from October to March between Golden and Kamloops and in several other B.C. mountain passes.

The regulations cover vehicles with a gross weight in excess of 11,794 kilograms (with separate traction requirements for vehicles under that weight). The new regs show exactly which tires need to be chained up when the roads turn treacherous and a mandatory chain-up requirement is put in place. 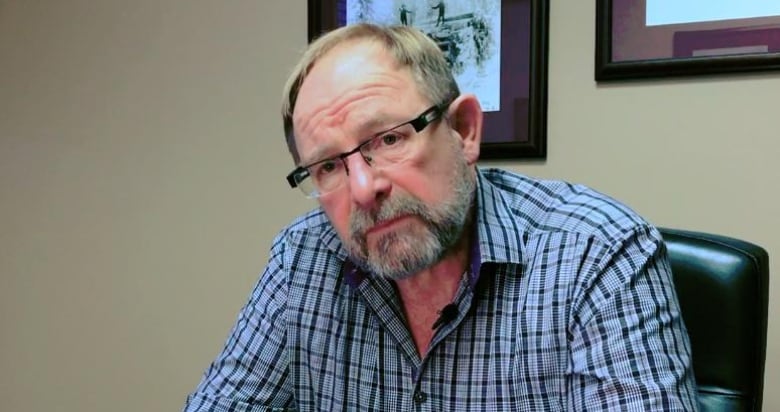 Gary Sulz is the mayor of Revelstoke, B.C. He’s also a long-time funeral director who has been called to dozens of fatal highway crashes on Highway 1. (Bryan Labby/CBC)

The stricter regulations follow one of the worst years for highway closures caused by commercial vehicles that either spun out or were involved in collisions. The province says “unprepared commercial trucks” caused 41 closures last winter.

The stricter rules require truckers to chain up as many as six tires if the rig includes two trailers — up from just one tire requiring chains.

Passenger cars must use winter tires with either snowflake or M&S (mud and snow) symbols on designated highways between Oct. 1 and April 30.

The carnage has taken a personal toll on Sulz.

“To say that some of us out there, [that] our lives have been changed because of poor road conditions or inexperienced driving, I’d say, yeah, it’s very, very prominent,” said Sulz.

A couple of years ago, Sulz and some emergency workers recovered victims from a car that was lodged underneath a commercial transport truck near Rogers Pass a, few days before Christmas.

Sulz wasn’t sure how many people were inside the car, but he soon realized the female driver wasn’t alone. After the car was lifted up and they were able to get inside, Sulz found two young children inside. Both were dead and were roughly the same age as his own grandchildren.

“For me, that was like lifting my own grandchildren,” he said, his voice breaking with emotion.

“I ended up seeking counselling for that because that stuck with me for a very long time,” he said.

The head of the local RCMP detachment says there are several reasons more crashes are happening — more traffic and tired, inattentive drivers.

“The volume of traffic passing through on the Trans-Canada Highway is getting greater every year,” said Staff Sgt. Kurt Grabinsky.

Grabinsky is hoping the new chain-up regulations make a difference, but he admits it’s going to be a challenge.

A recent road-side enforcement blitz on the Trans-Canada found some truckers who didn’t know where the chains were on their rigs or how to put them on. 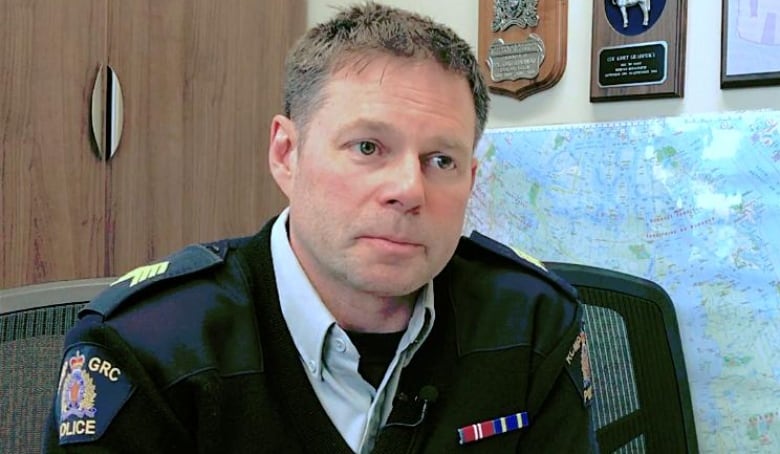 “I hate to be judging them, but in an industry where you are driving on roads where conditions change all the time, one should be capable of driving in all conditions,” he said.

“One should be prepared to drive in deep snow, heavy rain with hydroplaning, conditions where chaining up is a good thing.”

There were 13 commercial drivers killed in motor vehicle incidents in B.C. in 2017, the highest number in at least 10  years. A passenger in one of those rigs was also killed.

Overall, the number of traffic deaths has been falling on average by 3.2 per cent per year since 2008. There were 298 fatalities in the province last year, 99 of those in the southern interior.

At 1,330 metres, Rogers Pass is not the highest mountain pass in B.C., but that stretch of the Trans-Canada through Glacier National Park is known for a mind-boggling amount of snow each year — an estimated average range of 10 to 12 metres, or 32 to 40 feet, prompting on average of nearly 40 unplanned highway closures every winter.

The closures are mostly the result of vehicle crashes or avalanche control and cleanup.

Local tire shop owner Ryan Hunter, whose wife is from Calgary, says his family stays off the Trans-Canada to Alberta through the winter — unless the trip is absolutely necessary.

“You’re basically rolling the dice every time you get on that highway as to whether you’re going to get there in one piece or not,” said Hunter. 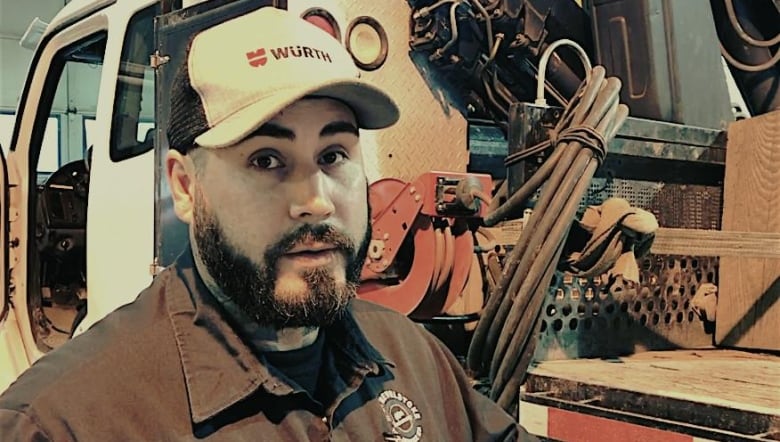 Ryan Hunter is a part owner of Excel Tire in Revelstoke, B.C. He’s met many inexperienced truckers who didn’t know how to put chains on their tires or balked at the cost.

Hunter says he’s seen many inexperienced truckers come into his shop who were terrified of the snowy road conditions. He’s also seen truckers balk at the cost of a set of chains and instead decide to venture out unprepared. One set of single tire chains costs approximately $150, said Hunter.

“If people are not following the regulations, then we’re going back to Square 1, where we’re seeing lots of head-ons and fatalities through the summits.”

Former Revelstoke mayor and councillor Mark McKee says along with “driver error,” the highway, which is mostly single lane in each direction with plenty of sharp curves, narrow bridges and steep hills, needs to be made safer.

“It’s too narrow, not enough passing lanes,” he said.  But he also points to the big commercial rigs.

“The trucks are part of the problem. They’re bigger, more powerful, go faster. People aren’t sure what they’re getting into when they drive in this part of the country,” McKee said. 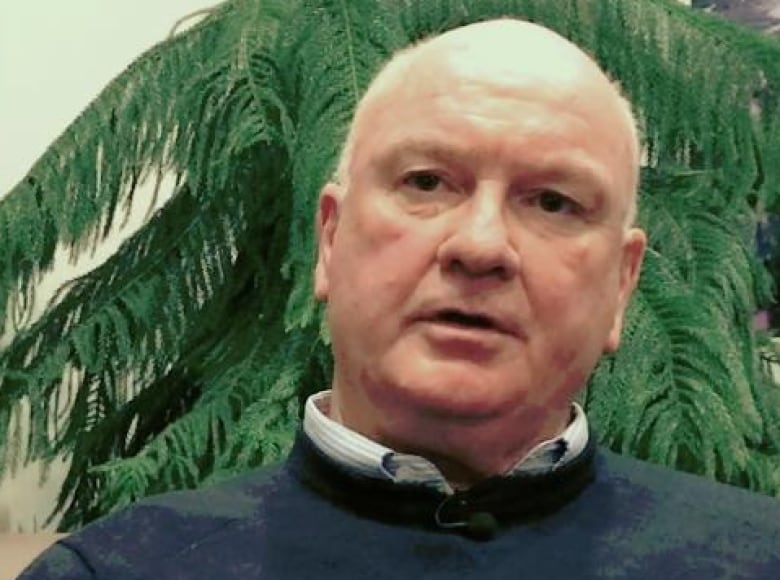 Mark McKee, a former councillor and mayor of Revelstoke, has been pushing for decades for safety improvements, including the twinning of Highway 1 between Kamloops and Alberta.

During his time as mayor, McKee urged the provincial and federal governments to inject more money into the highway to make it safer. He says the ultimate goal is to see the highway twinned between Alberta and Kamloops, but there is still no commitment from government.

McKee says either a divided highway or a barrier between the east and westbound lanes would make it safer.

He says there is no one in Revelstoke who hasn’t been affected.

Sulz says he will continue to push for those safety improvements. But in the meantime, he’s urging commercial truck drivers to follow the new rules.

He says his father and several uncles were “professional truckers,” and he believes too many new truckers lack the necessary experience to navigate the sometimes treacherous conditions between Revelstoke and Golden.

“It is difficult and it is emotional.”

Not all truckers on board

At a rest area near the Columbia River Bridge in Revelstoke, several truckers expressed concern about the new regulations.

“I don’t see it helping much, it will just slow the whole process down,” said Attila Tumar, who noted he has a 30-year, accident-free driving record.

‘I don’t know if it’s going to be a solution or not, but it’s going to make our life much more difficult,” said Tumar, who added he always chains up when it’s mandatory. 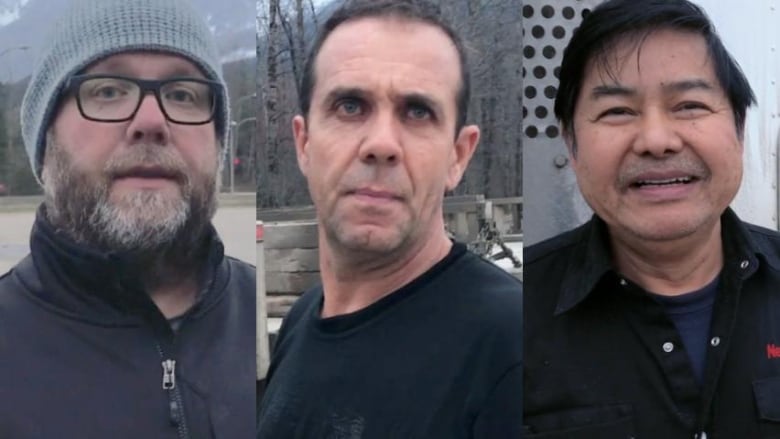 From left, Darren Hollinger, Attila Tumar and Nestor Garcia are all long-time truckers who talked to CBC while taking a break in Revelstoke, B.C. They had mixed reactions to new chain-up regulations brought in by the B.C. government. (Bryan Labby/CBC)

He believes the rules were brought in to deal with the number of incidents on B.C.’s Coquihalla Highway, not the Trans-Canada east of Revelstoke.

Calgary-based trucker Nestor Garcia, who’s been driving for nearly 40 years, says if the chain-up lights are flashing on the highway, he stops and puts them on, even if it takes him up to an hour. He doesn’t consider the regulations new because he says he’s been doing it all along.

“I don’t think you can get away without any chains, like, especially at Rogers Pass,” said Garcia.

Darren Hollinger, who has 25 years behind the wheel, considers himself a professional truck driver and says the newer, younger drivers look at it as just a job rather than a profession. He says part of the problem is that truckers aren’t paid enough, and if wages were to increase, more “professional” drivers would come back.

He also says some of those newer, inexperienced drivers are to blame for the mishaps on B.C.’s mountain passes.

“Yeah, I guess we wouldn’t have this problem if guys would actually put their chains on when they’re required to put them on,” said Hollinger.

“That’s what half the problem is.”

The Alberta Motor Transport Association, which represents all sectors of the highway transportation industry, believes the new rules will “absolutely” make the highway safer.

“It’s huge. There will be a little growing pains of getting everyone on board with it, but once that’s done, I think it’s going to be a much safer road. It’s a good decision,” said Chris Nash, the association’s president.