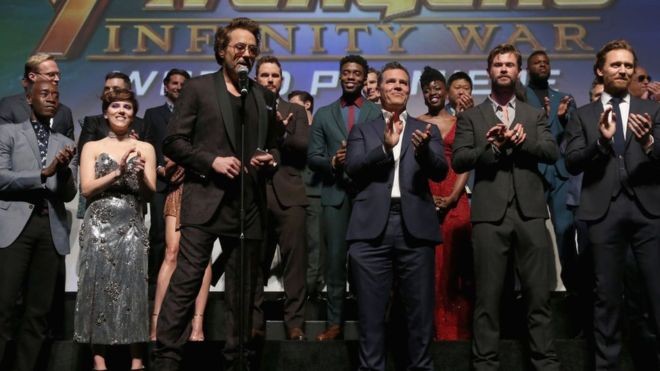 Avengers: Infinity War made history with a $630m (£457m) global opening weekend take, according to estimates.

Industry tracker Exhibitor Relations made the estimate, even though the film has not yet opened in China.

If confirmed, the superhero sequel would overtake The Fate of the Furious’s $542m global opening weekend haul, a record set in 2017.

The film is also seen taking the all-time domestic opening record, making $250m in the US alone.

Official figures will come out on Monday, but this would put Avengers ahead of Star Wars: The Force Awakens’ $248m take.

Infinity War, directed by brothers Joe and Anthony Russo, cost between $300m and $400m to make.

The film tracks a range of Marvel superheroes in their battle against villain Thanos.

The conclusion is set to be released in May 2019.

Avengers: Infinity War comes 10 years after the release of Iron Man, which kicked off a series of high-profile superhero films.

The first Avengers came out in 2012. It held the previous record opening for a Marvel film, making $207.4m domestically.

Age of Ultron, the second Avengers feature, debuted with $191m.