Athletics at White Sox: Two Teams on the Cusp 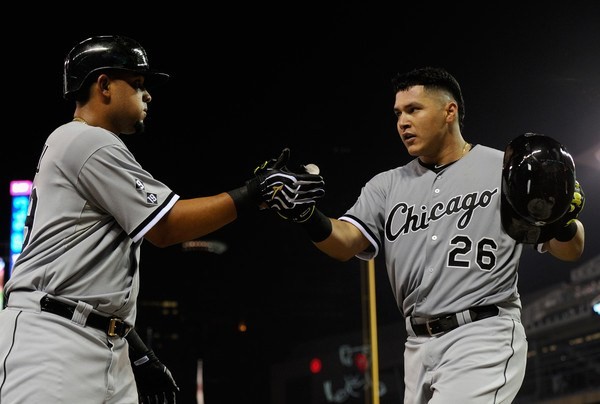 It can be hard not to feel disappointed in a 4-4 homestand, even this season, but it can be especially hard after that four game homestand began with a four game sweep of the first-place Yankees. Alas, the A’s could not repeat their success in their second four-game series of the week against Houston, as the Astros, even while missing 4/5’s of their opening day starting rotation (including aces Keuchel and McCullers) shut down the A’s offense and took care of business like they do. The Astros are now 27-8 on the road, whereas the A’s are 9-25 on the road, the disparity in road performances for the two teams essentially the entire difference between the A’s sad record and the Astros MLB-best record.

With their four game win streak, courtesy of the A’s, the Astros have become the first team in the MLB this year with fifty wins. With their four game losing streak, the A’s have the worst record in the American League. The other three teams in the division, like they have all year long, remain right around the .500 mark, with Seattle being the latest to break the .500 barrier after winning five consecutive games. The Mariners are now travelling to Houston for a three game set, so it remains to be seen how long the team stays above .500 before coming back down.

After hanging around near the tops of an underachieving AL Central division for much of the beginning of the season, the White Sox have finally started the slow drop out of contention the A’s are in the middle of enjoying. The White Sox had opted to begin what the franchise hopes to be a fast rebuild during the offseason, trading one of the best pitchers and one of the best outfielders in all of baseball for a collection of some of the most enviable prospects the league had to offer, and the team still has a handful of elite players, or players with the potential to be elite, that can net them a pretty haul during the midseason trades this year. Give the elite talent the White Sox have, and had, prior to this season, it could have been argued that the team ought to have opted to supplement the roster they had and try and plug the remaining holes on the team and try and be a dark horse contender in a relatively weak AL Central division, but it is hard to fault the franchise for choosing the path most likely to lead to sustained future success rather than to try and keep a rapidly slamming window open.

The White Sox are just 32-39, but the offense is more than capable of putting up crooked numbers on the scoreboard, and the pitching, particularly the bullpen, tends to seesaw uncontrollably between being unhittable and being unwatchable. Leading the offense is Jose Abreu, who, after a rough start to his major league career, has become the intimidating presence in the middle of the Sox’ lineup he was intended to be, but the top performers on offense surprisingly comes from the duo of Avisail Garcia and Matt Davidson. After he, too, looked to be no more than a highly talented athlete to never reach his full potential, Avisail Garcia has reached base in nearly 40% of his plate appearances this year and hasn’t sacrificed any power while reaching base exponentially more often. Rookie Matt Davidson isn’t getting the attention that players like Judge and Bellinger are deservedly receiving, but this season Davidson has smacked seventeen home runs while getting on base at a respectable clip. After an awful start to the season, Jose Quintana has finally been looking more and more like his old self on the mound in his first season as the White Sox’ top pitcher.

In addition to all of the players listed above, in recent games Mike Pelfrey has emerged as the most consistent, effective starter in the Chi Sox’ rotation, and has an ERA of 2.08 over his last five turns through the rotation. In the middle of a pitching staff filled with mediocre and struggling veterans, Pelfrey’s performance has been a breath of fresh air. On offense, scrappy utility waiver-wire pickup Alen Hanson has been forcing himself into the lineup every day. Taking advantage of injuries on the big league roster, Hanson has become the White Sox version of Chad Pinder (vastly differing offensive skill sets aside), as an unfortunately stone gloved middle infielder who has just maybe found his true home in the outfield, and has been OPS-ing .855 at the big league level since being given his chance in an admittedly extremely small sample.

Young shortstop Tim Anderson has not built on his experience from last year thus far this year. He has committed more errors in the field, with sixteen, than any other individual player, even including the A’s, and his OPS is down near .650. Despite his struggles, he still batted leadoff in Thursday’s ballgame, and the White Sox management appears to have nothing but patience and expect him to work through both his issues on offense and defense.

The A’s pitching on the road issues are well-founded at this point, but so are the White Sox’ general pitching issues, and so one could expect many-a runs to be put on the board over the next three games, particularly via the home run. Ideally, the A’s can hit quite a few more and notch their tenth road win of the season with a week to go in June.

With Pelfrey pitching as well as he has been of late, and Cotton turning into a shell of his former self while pitching in gray, Friday night’s game might be the toughest of the three for Oakland. All three games should be winnable, however, and this is the type of series the A’s really ought to play well in order to give the fanbase some amount of hope that the rest of this season, and the team’s next 1-2 years, won’t be the unwatchable mess that the team has been. With the old guard clearly on its way out, this won’t be the same pushover road-team that is has been for the first two and a half months of the year, and it’s time for the team to prove it.

Link to South Side Sox