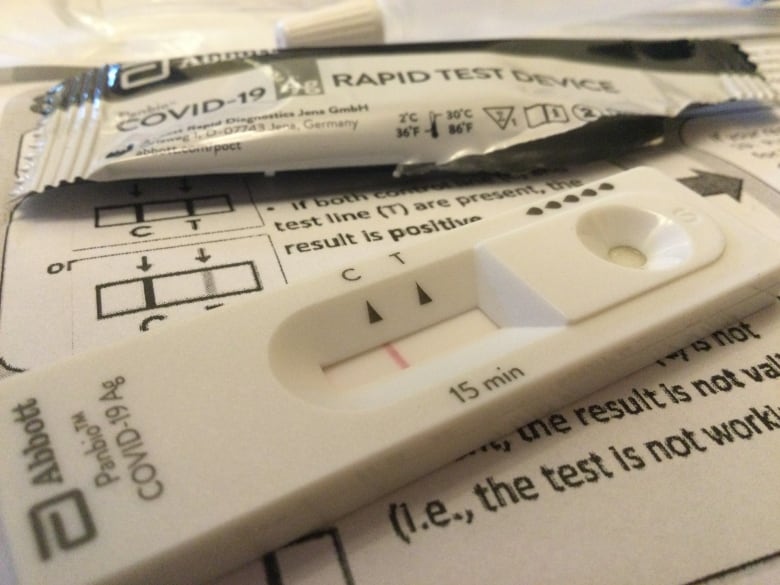 As more provinces scale back PCR testing for COVID-19 and the Omicron variant continues to surge, many people in Canada are relying on results from take-home rapid antigen tests, if they can get their hands on them.

However, in much of the country, rapid tests are going uncounted and are not included in official provincial case counts. Some medical experts are warning it’s important to document those results to keep tabs on the pandemic’s progress.

“We need it for a number of things,” said Sally Otto, a UBC evolutionary biologist and member of B.C.’s COVID-19 Modelling Team.

The tracking of positive results from rapid tests is extremely limited, with most jurisdictions forgoing any kind of reporting system, and it’s getting more difficult for people to access other forms of testing in several parts of Canada.

On Thursday, for example, Ontario changed its testing guidelines to say people who receive positive results on rapid antigen tests no longer need to get PCR tests for confirmation. And as of Friday, the province is also limiting PCR testing to high-risk people who are symptomatic, vulnerable populations and workers in high-risk settings.

A piecemeal effort is not going to be as good.– Sally Otto, member of B.C.’s COVID-19 Modelling Team

“A piecemeal effort is not going to be as good in terms of the ability to have a good sense of actually how many people are infected right now, what’s the predicted burden that’s going to lead to with hospitalization and when will we be through this,” Otto said.

The precedent for reporting of rapid tests already exists: the United Kingdom has been asking residents to report their results — positive, negative or void — for the last nine months.

“The best data we’ve had about the COVID pandemic has been from the United Kingdom and that’s been because of their strong data analytic framework. They have data on cases linked to hospitalization and vaccination and that’s world class,” Otto said.

Jarvis Schmid of Calgary tested positive for COVID-19 on a rapid test on Boxing Day.

After he processed the news, Schmid next wondered what he needed to do with his result.

“I remember someone saying something about it’s good to have these records on hand. What if you have long term symptoms or it helps with diagnoses?” said the 38-year-old, who has been isolating from his family.

There is no system to track rapid test results in Alberta so Schmid instead uploaded a photo of his rapid test along with the date he took the test into his electronic medical records.

However, not everyone agrees a portal similar to what Schmid suggests would be helpful.

Dr. Stephanie Smith, an infectious diseases specialist at the University of Alberta, said that type of tracking would require people to be proactive about inputting their results.

“I think the time and effort and money it takes may not actually result in a huge amount of benefit in terms of giving us more information than what we have from the subset of people that are still getting PCR tested,” Smith said.

Alberta family physician Dr. David Keegan said something is better than nothing when it comes to tracking rapid test results.

He’s primarily concerned with the bureaucratic consequences for patients who only have a positive rapid test rather than PCR confirmation.

“Will disability, insurance companies accept those when later on, people are looking at long-term disability for benefits and for access to services? Will those self-reported results be accepted? We don’t know,” Keegan said.

“Let’s hope they are. It would just be ideal if governments had figured out a way to gather such data, rapid test results objectively.”