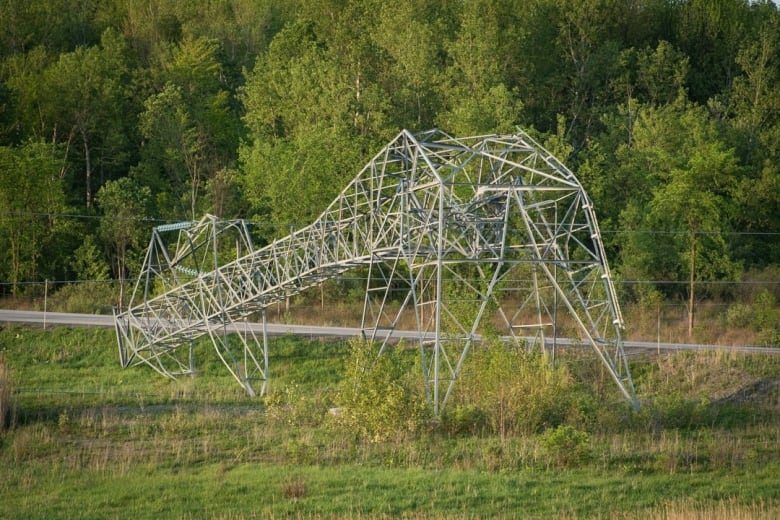 Four massive steel transmission towers that sit crumpled around Ottawa hint at the scope of the challenge facing crews in the wake of Saturday’s massive storm as they work to restore power to tens of thousands of customers.

Those Hydro One towers, or what’s left of them, also stand as proof just how ferocious the winds that battered the region were — and how vulnerable the city’s power grid can be.

They’re evidence of a weather event that Hydro Ottawa CEO Bryce Conrad said was worse than the ice storm of 1998 and the tornadoes that tore through the area in 2018.

“Those [towers] are meant to withstand ice loading and massive winds, and they collapsed like children’s toys,” he said.

While the ice storm 24 years ago coated areas of eastern Ontario and toppled towers too, it was largely a rural event locally, Conrad explained, when asked why Saturday’s storm was worse.

The six tornados that cut through the Ottawa-Gatineau region about four years ago wiped out the Merivale transmission station and damaged some poles, leaving Barrhaven and other places in the dark.

But Conrad said they knew it was only a matter of getting power back from the provincial grid to light the community back up.

This storm was different.

“There’s not a single square inch of our service territory that has not been impacted adversely by this event,” said Conrad.

An estimated 110,000 customers are still waiting for the lights to come back on, officials said at a Monday afternoon press conference. That number was about 75,000 as of 7 a.m. Tuesday.

The hardest gust measured at the Ottawa International Airport Saturday was 120 km/h. While storms don’t always hit the airport with full force, that’s the strongest gust measured there since 1962.

All available employees and contractors have been working around the clock, said Joseph Muglia, the director of system operations and grid automation for Hydro Ottawa.

Reinforcements have been called in from Kingston, Ont., the Toronto area and New Brunswick.

They’ve been focused on restoring power to critical institutions such as hospitals and the water treatment plant, before pivoting to large neighbourhoods where they can get “the biggest bang for our buck,” Muglia said on Sunday.

Both the local and provincial grid have sustained extensive damage, he added.

“This storm, however brief, was very destructive.”

Hydro Ottawa has provided estimates ranging from 160 to 200 broken poles, listing downed trees and damaged infrastructure among other obstacles to getting the power back on.

Conrad suggested it could take two to four more days of around-the-clock work, but even then there will be pockets of homes so damaged that crews won’t risk re-energizing them.

Hydro One is grappling with damage of its own. Spokesperson Tiziana Baccega Rosa said Tuesday there are about 1,400 broken poles across Ontario.

The huge transmission towers now bent as if they’re “made out of paper” were part of the system that delivers power to Ottawa, she said, before being distributed by the local grid.

“It’s like the superhighway, it’s like your 400-series,” Baccega Rosa explained. “It is moving energy from where it’s generated to where it needs to go.”

While they’re not the only reason the power is out, they are an important piece of the puzzle, she said.

Baccega Rosa compared the repairs to building with Lego bricks, explaining that fixing a power outage isn’t as simple as getting a hydro truck to your house.

Instead, it needs to be done in sequence or crews will be working backwards.

“You need to lay the foundation,” she said. “We need to repair the big lines first, in order to repair the secondary lines and then right down to the one you see on your street.”

According to Conrad, as more downed trees are removed in Ottawa, workers are uncovering more and more damage.

Even when they’re confident the feeder line is ready to be energized, they’re being “uber-cautious” and will re-patrol the area rather than risk someone dying or sparking a fire, he said.

The scale of the damage has led some to suggest there must be a better way to do things, but Conrad said buried lines in Ottawa’s Trend-Arlington were also wrecked by the tornado in 2018.

And while it’s easy to pick on wooden poles, a more robust, more expensive alternative along Hawthorne Avenue came down during Saturday’s storm too, he noted.

“We don’t really know what the hell hit us,” said Conrad. “Whatever it was, it took down composite poles that are 65 feet tall.”

Asked what could prevent future mass outages in the future, he let out a sigh.

“I would love to tell you I have a perfect plan so this never happens again,” Conrad said. “I wish I had the right answer. I wouldn’t have to be working.”

Share
Facebook
Twitter
WhatsApp
Pinterest
Linkedin
ReddIt
Email
Print
Tumblr
Telegram
Mix
VK
Digg
LINE
Viber
Naver
Previous articleRoommate or tenant? The question is at the heart of Ontario rental dispute that led to viral video
Next articleFor me, throttle therapy is a chance to contemplate life — from behind the handlebars