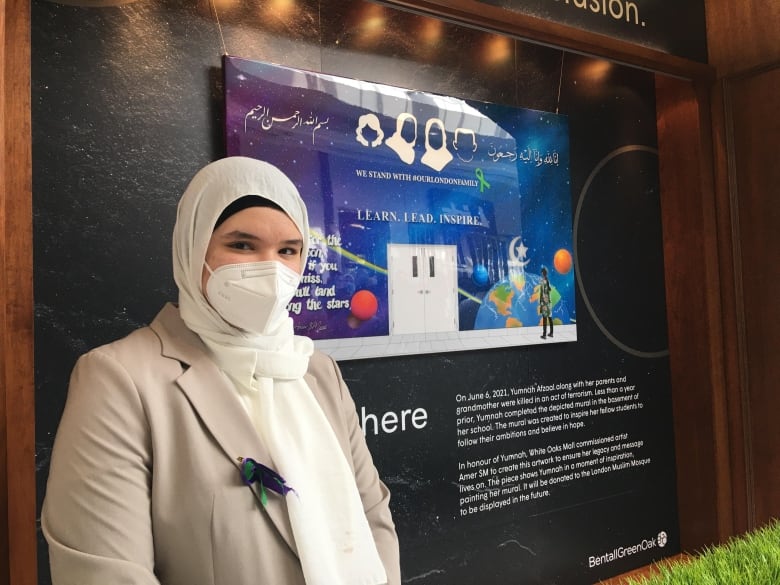 Eight months after she and three members of her family died in what police say was a hate-motivated attack in London, Ont., the legacy of 15-year-old Yumnah Afzaal continues to inspire change.

On Saturday, a painting by artist Amer Sal Mohammed — who works under the name Amer SM — was unveiled at the city’s White Oaks Mall. The artwork was inspired by a floor-to-ceiling mural that Yumnah painted in the halls of the London Islamic School.

This new work retains much of Yumnah’s vision, including the dreamy vista of space and the statement: “Shoot for the moon, even if you miss, you will land among the stars.”

Amer SM, based in Toronto, added a few new elements, including silhouettes of the four fallen members of the Afzaal family. In the bottom-right corner, he painted Yumnah, brush in hand, as she applies the final few strokes.

“I tried to keep the piece as original as possible to her own work,” he said. “I feel truly honoured to be a part of this.”

The painting will hang at White Oaks Mall for three months before moving to the London Muslim Mosque for display, close to the one-year anniversary of the attack on June 6, 2021.

Yumnah; her father, Salman Afzaal, 46; her mother, Madiha Salman, 44; and her grandmother, Talat Afzaal, 74, all died when they were hit by a truck while out for an evening walk. Yumnah’s brother, Fayez, who was nine years old at the time of the attack, survived.

The attack sent waves of immense grief through London’s 30,000-strong Muslim community and beyond. It also sparked an ongoing national discussion about the prevalence of Islamophobia in Canada.

But before that terrible event, there was Yumnah with the world in front of her and a desire to create an inspiring piece of art before moving on to high school.

At Saturday’s unveiling, Yumnah’s friend, Huda Sallam, spoke about how a determined Yumnah came to create the now-famous mural.

Sallam admits she doubted whether Yumnah — who had never before worked with spray paint — would be able to complete such an ambitious work.

Shortly after, Sallam visited Yumnah as she taught herself how to spray paint in her parents’ garage.

“She was wearing a big gas mask like SWAT officers wear when they are raiding houses,” Sallam said. “It was way too big on her. She had a lab coat on and these gigantic boots, and she had her phone on the ground watching YouTube videos about how to do it. When I walked in, I was in awe because she had completely mastered the three techniques for spray painting. Totally mastered them. In two weeks.”

The mural was a massive success, and in the days after the attack, its message of perseverance and optimism became a focal point of both the immense loss and the hope it could lead to positive change.

Aarij Anwer, an imam and director of religious affairs at the London Muslim Mosque, says he has already seen some of that change.

“This family, we are never going to be able to replace them,” he said. “But we don’t want their lives to be lost in vain. These charges are the positive steps we hope for, and they are coming.”

The steps he’s talking about include the City of London’s move to hire a Muslim community liaison officer and enact an extensive plan to combat Islamophobia. Anwer also pointed to the passing in the Ontario Legislature of the Our London Family Act, which has a similar aim.

Meanwhile, London’s Muslim community is bracing for the pain that will surely come on the attack’s one-year anniversary in June. More grief is expected as the man charged in the attack begins his trial, which will also come this spring. His next court date is in April.