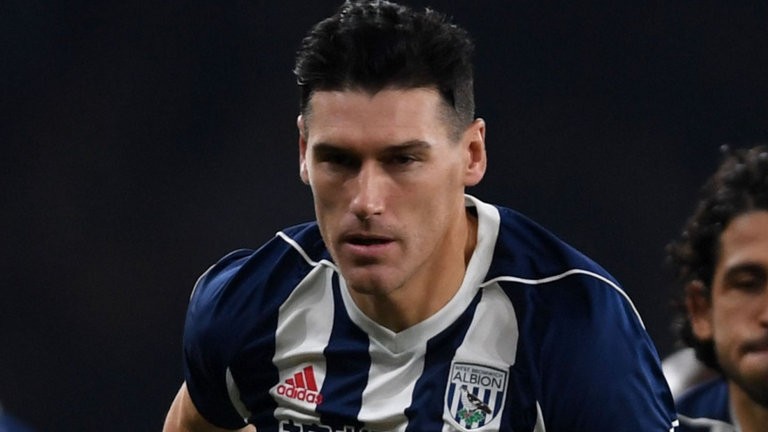 A goal in each half from Alexandre Lacazette gave Arsenal a 2-0 win over West Brom at the Emirates in the Premier League.

West Brom had several chances in the first half, and Jay Rodriguez had a strong call for a penalty turned down early on, but Lacazette’s headed rebound (20) had Arsenal ahead at the break.

Lacazette’s penalty made it 2-0 to Arsenal midway through the second half, and that’s how it stayed as Arsene Wenger’s side kept their 100 per cent home record this season.

The result means Arsenal moved up to seventh on 10 points, while West Brom are in eighth, two points behind.

Man of the match: Nacho Monreal

During an action-packed first half, West Brom rightly felt aggrieved not to have been awarded a penalty after eight minutes following Shkodran Mustafi’s trip on Rodriguez.

The incident went unpunished by referee Robert Madley, but Rodriguez recovered, hit the post from 12 yards via a superb touch from goalkeeper Petr Cech, before Jake Livermore then struck wide with the goal gaping.

Arsenal then took the lead on 20 minutes as Lacazette reacted quickest to head the ball home from five yards after Alexis Sanchez’s free-kick had hit the bar and been stopped by the fingertips of Ben Foster.

Mesut Ozil was named on the bench as he recovers from a knee problem, alongside fellow Theo Walcott and Jack Wilshere. Alexis Sanchez started alongside Alexandre Lacazette up front for the hosts. Gareth Barry was named West Brom skipper on his record-breaking 633rd Premier League appearance; Chris Brunt and Jake Livermore were fit enough to make the bench, but Nacer Chadli and Oliver Burke missed out with injury.

West Brom went close twice before the break; Rodriguez’s cross was headed goalwards by Grzegorz Krychowiak, only for Nacho Monreal to clear superbly off the line, before Gareth Barry struggled to scramble the ball home from close range after Kieran Gibbs’ first-time delivery.

Lacazette nearly had a second after the break, but his effort from 12 yards was superbly deflected over by former Arsenal defender Gibbs, but the Frenchman did make it 2-0 on 67 minutes, converting from the spot after Allan Nyom had barged Aaron Ramsey at the byline.

Ramsey was denied by the feet of Foster late on, while Mesut Ozil made his return to action as a late second-half substitute.

Arsene Wenger: “Mustafi tackles and touched the West Brom player. Would have been given, he left [gave] the advantage the referee, and I think rightly so because they’re in a position where they could score, and in the end they hit the post.

“So it’s the kind of decision that is different, because if he doesn’t leave the advantage, and they miss the penalty people will say why didn’t he give the advantage.”

Tony Pulis: “I think everybody has seen what’s happened today. I think if you want to make an example of something, Sanchez actually dives on the edge of the box for the first free-kick. And he should be booked for diving there, in my opinion. Then you see the tackle in the box on Jay, the referee’s got a great view, it’s a stonewall penalty.

“Jay is honest, and doesn’t get his reward for being honest. We haven’t had a penalty at this football club for over a year. And none of my players are told to roll around.”

Man of the match – Nacho Monreal

Though Lacazette stole the headlines, wing-back Monreal earned the plaudits from Arsenal fans for an assured performance.

His passing accuracy (93.8 per cent) was higher than any of the starting 22 at the Emirates, and made more tackles (four) and intercpetions than any other Arsenal player.

Monreal played on the left of the three on Monday Night Football, and though he has looked uncomfortable there on occasions so far this season, the Spaniard strengthened his cause as Arsene Wenger continues to experiment with his defence.