Anti-Igbo threat: Osinbajo vows to clamp down on troublemakers 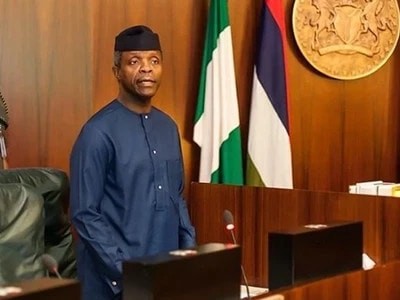 The acting President, Yemi Osinbajo, on Tuesday, read the Riot Act to all those beating the drums of war across the country, saying the full force of the law would be applied where necessary.

Osinbajo gave the warning while addressing leaders of thought from the northern part of the country at the Presidential Villa, Abuja.

The meeting, which was held behind closed doors, was called in the wake of the recent notice to quit some youths from the northern part of the country handed down to people from the South-East to leave their region.

Osinbajo, in his opening remarks before journalists were asked to leave the venue, said the Federal Government was determined to ensure unity in the country.

He said hate speeches and other divisive behaviours would be met with the full force of the law.

He said government would take very seriously any attempts to cause violence or disrupt the peace of the country.

The acting President said, “As a government, we are determined to ensure the unity of the country along the lines of our constitution and I want to say that hate and divisive speech or divisive behaviour where it is illegal will be met with the full force of the law.

“I want to ensure that there is no doubt at all that it is the resolve of the government that no one will be allowed to get away with making speeches that can cause sedition or that can cause violence.

“So I want to emphasise that government will take very seriously any attempts to cause violence or disrupt the peace of this country. And that is very important because you cannot control violence once it begins.”

Osinbajo likened violence or hate speech to a stone thrown in the marketplace which would hit targets that would be deadly.

He said Nigerians needed to be fully conscious so that they would not create a crisis that was not intended.

Osinbajo admitted that as part of living together, misunderstandings and frustrations would always arise and people would always want to get the best part of the deal.

Those at the meeting included the President of the Senate, Bukola Saraki; Speaker of the House of Representatives, Yakubu Dogara; Chief of Defence Staff, Gen. Gabriel Olonisakin; Chairman of Arewa Consultative Forum and former Inspector-General of Police, Ibrahim Coomassie; spokesman for the Northern Elders Forum, Prof. Ango Abdullahi; and a former governor of Sokoto State, Aliyu Wamakko.

Others are a former deputy governor of Plateau State, Pauline Tallen; the Publisher of Leadership newspapers, Sam Ndah-Isaiah; Paul Unongo, Chairman, Liberty Radio and Television, Tijani Ramalan; and the Editor-in-Chief, Daily Trust, Dan Ali, among others.

Osinbajo is expected to meet with leaders from the South-East separately before he would eventually meet with both groups together.

His Senior Special Assistant on Media and Publicity, Mr. Laolu Akande, confirmed this in a series of tweets on his Twitter handle on Tuesday.

“Acting President Osinbajo will start a series of consultations with the Leaders of Thought from the northern and eastern regions of the country this afternoon (Tuesday).

“Osinbajo will first meet each group separately on different days this week and then meet them together afterwards,” Akande wrote.

He also confirmed that the acting President met with security chiefs over the weekend on the need to ensure that Nigerians were protected in every part of the country.

“The acting President met over the weekend with security chiefs and gave firm instructions on the need to protect lives and property of all Nigerians always, everywhere,” he added.

Meanwhile, the leadership of the Christian Association of Nigeria in the North has met with the Senate President, Bukola Saraki, over the tension generated by the notice to quit issued by Arewa groups for the Igbo to vacate the North.

The meeting also discussed the prevailing security situation in the North especially in Southern Kaduna as well as the alleged marginalisation of Christians by some governors in the region.

The Niger State Chairman of CAN, Reverend Mathias Echioda, who confirmed the meeting while addressing journalists in Minna on Tuesday, said CAN in the 19 northern states took exception to the quit notice issued to the Igbo.

Though Echioda did not give further details of the meeting he, nonetheless, asked the elders in the North to put pressure on the Arewa groups to withdraw the ultimatum issued to the Igbo.