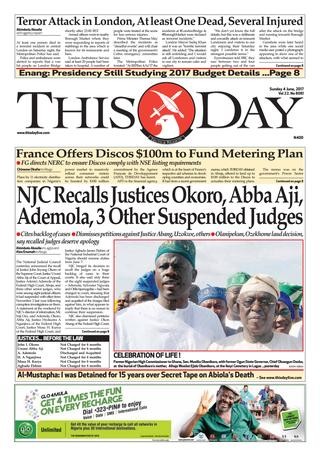 The decision by some parents in the North eastern part of the country to donate their daughters to the cause of Boko Haram as suicide bombers is sad and a dangerous trend in the ongoing war against terror, writes Olawale Olaleye

Just when the resurgence of Boko Haram attacks had disproved claims by the federal government that it had technically defeated the Boko Haram sect, the alarm raised penultimate weekend by the Nigerian Army that some parents in the North-east region of Nigeria had begun to donate their daughters out of freewill to the cause of the Boko Haram sect presented an entirely new debate in the terror war. Although the Army believed that this new disposition was equally responsible for the renewed attacks in recent weeks, it speaks more, both to the management of the war on terror and the communications of truth thereof.
Director of Army Public Relations, Brig. Gen. Sani Usman, who informed the public about the development in the North-east, however appealed to religious, traditional and community leaders in the zone to help dissuade parents from donating their wards and daughters as suicide bombers to the Boko Haram sect.

“The Nigerian Army wishes to appeal to religious, traditional and community leaders, as well as all well-meaning Nigerians especially in the North-east of our country, to help dissuade people from donating their daughters or wards, to Boko Haram terrorists for indoctrination and suicide bombing missions.

“This appeal became expedient in view of recent revelations by some intercepted female suicide bombers during interrogations. It was discovered that most of these hapless minors were ‘donated’ to the terrorist sect by their heartless and misguided parents and guardians, as part of their contribution to the perpetuation of the Boko Haram terrorists’ dastardly acts against the Nigerian society and humanity.

“The acts of these parents and guardians are not only barbaric, but condemnable and unacceptable. Nigerians have a responsibility and obligation to collectively mould our children and wards and define a better future for them rather than condemning them to death by the criminal Boko Haram terrorists and their sympathisers through suicide bombings. Consequently, the public are kindly requested to be more vigilant, security conscious and report any suspicious persons or those whose daughters or female wards are missing or have not been seen recently.

Clearly, something is amiss and it requires serious probing. First, it is important to inquire what narrative the Boko Haram members sold to those parents to think it was a worthy cause to donate their own kids to such an inhuman project. Is it possible that such parents, out of their desperate state, offered their wards in exchange for money or other things to make life better for them? Or was it an involvement triggered by threats from the sect in one form or the other? Perhaps, these parents too are undercover agents of the sect, who feel to be under an obligation to enhance the cause of terrorism through ideological leanings?

Indeed, there are many dimensions to ponder over such a creepy decision that would warrant parents willingly goading their daughters unto their early grave. This, notwithstanding, one thing still stands out and it is the poor management of the terror war by the federal government. More of an ideological war, which has festered over the years since 2009, government has not been seen as having strategically improved its approach to containing the war, even when it is trite to admit that the war on terror is difficult to win unlike the conventional war.

For one, the use of force has proven to be ineffective, even whilst government has not properly managed the various openings for dialogue with the now factionalised leadership of the sect. Also, the failure of government to effectively engage respected Muslim clerics to undo the inane brainwashing of the recruits is a testament to the fact that the failure to effectually contain the war on terror is more about the approach by government than the fact that its efforts are not yielding results as planned.

The other downside is the use of propaganda in the fight against terror by the information machine of the government. This idea has seen government relish more in sheer ‘lies’ than the opportunity to confront the realities based on facts as presented by the prevailing circumstances. But while this propaganda is tailored to give false hope on the one hand, what the people deal with in terms of the reality is a far cry from the image being presented.

The resurgence of attacks by the terrorist group is proof that the war is far from being over and if anything is more certain, it is the fact that the ambushing and killing of the Nigerian soldiers are evidence that the terrorists might have returned to the turf better equipped and mobilised than they were. Government must see this reality in the frame it is and bounce off counter-strategy from the pedestal of higher thinking.

The idea by parents to donate their wards, in which case the children do not have a say or cannot decline, is worrisome and is not acceptable. Government must infiltrate the areas where this practice is beginning to take root in the North-east, involve the traditional and religious leaders to help defuse the tide, otherwise, what this means is that the terrorists would remain at an advantage in terms of delivering on their evil and deadly mission, which is not only bad for the security agencies, but puts the country in bad spot, globally. Intelligence gathering has long taken flight and this must be brought back, enhanced with better remuneration as part of the incentives to encourage the security forces as well as better place them in this onerous mission.