An animated history of elections gone sideways in N.L. 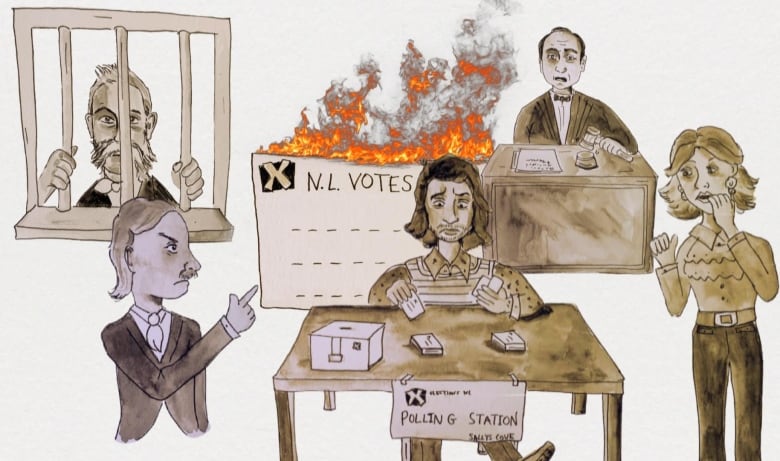 With its shifting deadlines, mail-in ballots and pandemic politics, the current election in Newfoundland and Labrador has taken some sideways turns.

But in this province, we’ve been here before — or, at least, have seen the campaign trail go wildly off course.

Our history books are filled with stories of elections that went wildly off the rails — complete with angry mobs, vote buying, ballot burning, and candidates who went to jail or into exile.

These tales of distorted democracy come straight from the pages of The Encyclopedia of Newfoundland and Labrador. We chose just a few examples from the province’s long and colourful political history. But since we don’t have video from the mid-19th century, we’re using art and animation to bring these stories to life.

WATCH | Click the video below to see an animated history of elections that went sideways:

If you think this election has taken an odd path, you should see what’s in the history books. 2:27

Our first story comes from Burin in 1873, when a candidate named James Winter found himself confronted by a drunken mob. It was nomination day, and the mob demanded to hear Winter’s stance on Confederation with Canada (a hot topic that year, the same time that colonies met in Charlottetown to hammer out the young country). Winter replied that he would only support Confederation if a majority of people backed it by referendum.

But that wasn’t good enough for the mob, which hurled the word “traitor!” in Winter’s direction.

So to stop him from being nominated, the mob hustled Winter into the Burin courthouse, where they locked him up. But even that didn’t satisfy them. Fearing that Winter’s supporters would arrive in time to bust him out, the mob forced Winter into a boat, and sailed him 19 kilometres away to the town of Beau Bois, where he was put under lock and key again.

Now, if a political candidate was confronted by a mob today, tossed in a trunk, taken to another town and locked up in a basement, they might consider dropping out of the race.

But not James Winter. He managed to escape his confinement that very night, and walked all the way back to Burin. Best of all, he had already submitted his nomination papers to the town’s returning officer before the mob got to him. By the time Winter got home, he had already won the election.

And James Winter really did get the last laugh; he went on to become the 10th premier of Newfoundland, and the town of Winterton is named in his honour. Take that, drunken mob!

An ‘indecent carnival of scurrility’

The provincial election of 1893 was thoroughly modern in one sense: it was marred by mudslinging, dirty tricks and candidates hurling personal insults. The eminent historian D. W. Prowse is quoted in the Encyclopedia, saying: “Both the political parties vied with each other in keeping up in this indecent carnival of scurrility.”

When the votes were counted, the Liberal party had won a large majority. But the Conservatives accused most of the Liberal caucus of cheating, by promising prospective supporters government jobs in exchange for their votes. This vote-buying scandal sent the nascent government into free-fall, while the ensuing courtroom drama dragged on for months. But in the end, the accused Liberals were all found guilty, booted from their freshly-won seats, and barred from running for office again.

But the Conservatives weren’t able to savour the victory for long. When byelections were held to replace those booted out, the Liberals were returned to power with precisely the same number of seats they had held before.

…You did what with the ballots?

Plenty of people will not need a history book to remember the sideways election of 1971. The results were so close that several districts held recounts. Indeed, the fate of the whole government hung in the balance, and another election would need to be held in early 1972. That’s when the Frank Moores Tories burst through and ended 23 years of rule for Joey Smallwood’s Liberals.

In the midst of all this, in the tiny village of Sally’s Cove on Newfoundland’s west coast, 106 ballots were found to be missing.

It turned out that the deputy returning officer in Sally’s Cove, a woman named Olive Payne, had accidentally burned the ballots after they were counted the first time, so no recount was possible.

A judge later ruled that the ballot burning was an unfortunate accident, and that Payne had no political motive and had not committed a crime.

By then, the story was already the stuff of political legend. [Olive Payne her own dubious entry in the Encyclopedia of Newfoundland and Labrador.]

These are just a few examples from scandalous political history.

So while our current election has taken some uniquely sideways turns, in the pages of some future history book, it may appear as just another indecently scurrilous chapter.