Amenity or liability? Ottawa neighbours at odds over personal touches to public land 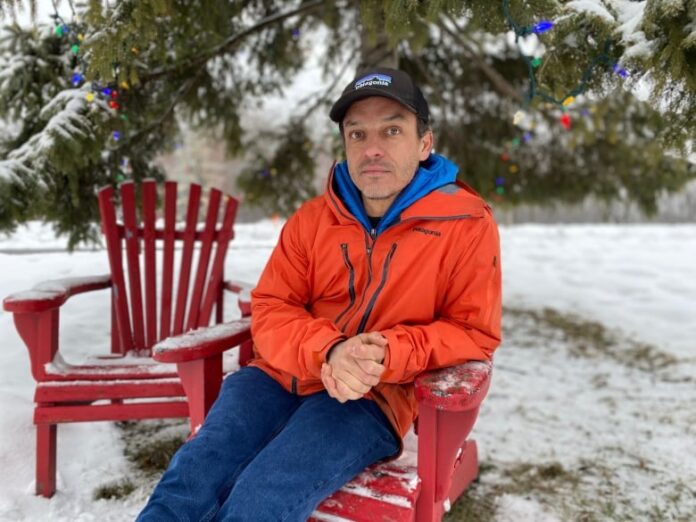 It’s either an amenity or a liability depending on who you ask along a seemingly quiet street in Ottawa’s New Edinburgh neighbourhood, but a pair of Muskoka chairs, two wooden play structures, a Little Free Library and some holiday lights are causing tension between neighbours.

Chris Straka started adding what he calls “embellishments to the public space,” even before the pandemic — a Little Free Library on a utility pole, two Muskoka chairs and a wooden horse and unicorn for kids to play on.

Then some neighbours got together to put up holiday lights on three trees in the little strip of land bordered by Dufferin Road, Stanley Avenue and River Lane last year.

This year, they did the same, using an extension cord Straka had connected to his home.

“The holiday light tradition along the laneways of old New Edinburgh bring light and bring joy,” he said.

Then Ottawa Bylaw Services got a complaint in December and on Wednesday, Straka was given 48 hours to take down the decor or face a $615 fine.

“It’s ridiculous. We do what we can to kind of get a nice neighbourhood for the kids,” said Christian Hansson, whose house borders the lane and is part of a group of parents who call themselves the “lads (or lasses) of the lane.”

“We spent 30 hours putting up Christmas lights on the lane and to remove that because somebody has a grudge and doesn’t want to call us and use bylaw as their personal lap dog.”

David Pyman, who lives at the other end of the lane from the strip of land, agreed.

“All we’ve tried to do is improve our community by donating our time and resources to making a better public space,” he said.

“I think it’s a shame that someone would go out of their way to complain during Christmas when all we’re trying to do is spread a little Christmas cheer.”

Some see it differently

Yet, some neighbours told CBC they see the decor differently.

In an email to CBC, Roger Chapman, the city’s director of bylaw and regulatory services said officers received a complaint that someone had “expanded their private garden into Stanley Park.”

“To a certain extent, you know, I think a couple of chairs isn’t particularly harmful, in fact it’s sort of nice,” said Ann Davis.

‘”On the other hand, I think that there are laws and, you know, I can’t put up chairs in the park. So, in a sense why should anybody be allowed to put up chairs [in that area]?”

Gosse Bruinsma said he’s heard from neighbours who are angry because they feel the park is being used as an extension of someone’s private backyard.

“It’s sort of the thin edge of the wedge, if everybody does whatever they please on city property,” said Bruinsma.

He also believes the city could be liable if anyone was hurt using any of the private items on public land.

“The flip-side is of course, if everybody were to put whatever they want on city property, neighbourhoods would become probably fairly chaotic,” he said.

On Friday evening, Straka told CBC they don’t plan to take down the lights or remove the other items anytime soon.

Yet, it appears a jurisdictional challenge may have bought him some time.

Near the tail end of the 48-hour deadline, the city told CBC it has determined the land is actually owned by the National Capital Commission (NCC) and the complaint would be referred to them.

The NCC told CBC it’s aware of a complaint about the area, and is expecting the referral from Ottawa’s bylaw department.