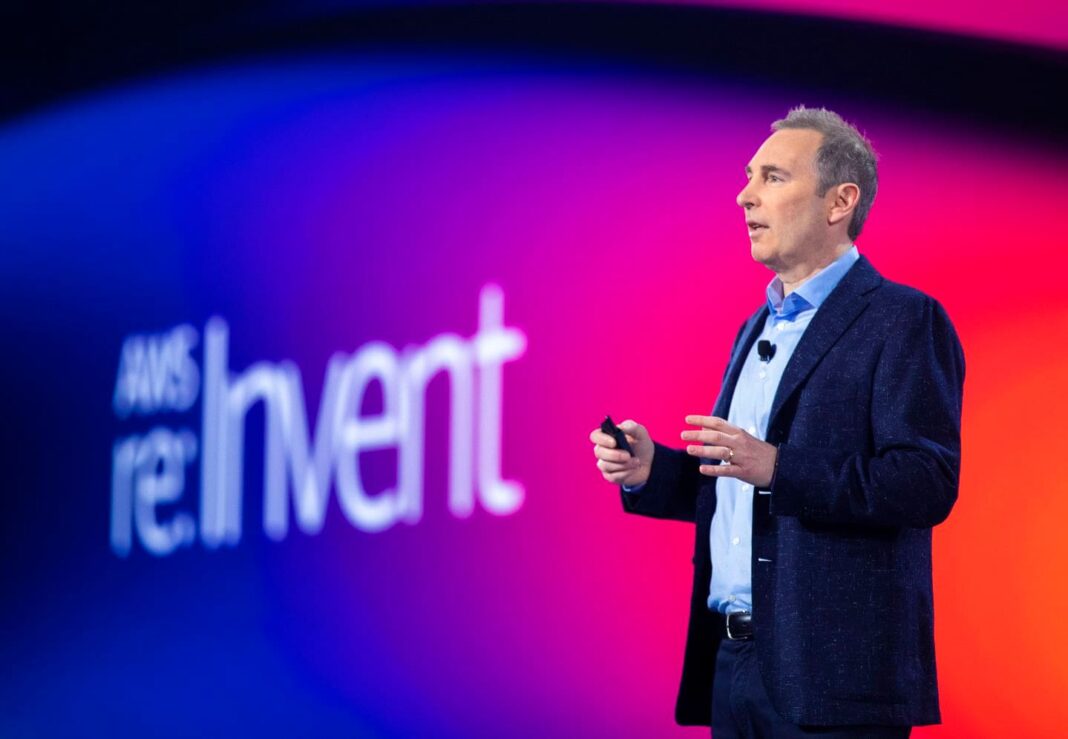 “
Amazon says Trump launched ‘repeated public and behind-the-scenes attacks’ over cloud contract Basic justice requires reevaluation of proposals and a new award decision,” Amazon wrote. “The stakes are high. The question is whether the President of the United States should be allowed to use the budget of DoD to pursue his own personal and political ends.”

The Joint Enterprise Defense Infrastructure, or JEDI, contract was awarded to Microsoft on Oct. 25 after more than a year of speculation that Amazon was the only capable bidder. It is meant to create a powerful, centralized computing system that will enable the military’s adoption of artificial intelligence.

The e-commerce giant formally filed its protest in the U.S. Court of Federal Claims on Nov. 8. Amazon made clear in its filing that it wants the JEDI award to Microsoft to be terminated and that the Pentagon “must reevaluate the proposals fairly and free of any direct or indirect improper influence.”

“President Trump’s improper direct intervention, its upending of the procurement, and the President’s personal goal of preventing AWS [Amazon Web Services] from receiving the JEDI Contract were widely reported at the time,” Amazon’s filing states.

A White House spokesman did not immediately respond to a request for comment. The Defense Department has said that the procurement process was conducted by seasoned procurement experts who had no contact with the White House.

“There were no external influences on the source selection decision,” department spokeswoman Elissa Smith said in an email. “The department is confident in the JEDI award and remains focused on getting this critical capability into the hands of our warfighters as quickly and efficiently as possible.”

While the company extensively quotes Trump’s attacks on Bezos and Amazon, the redacted filing never cites specific evidence of the Pentagon acting on those broadsides. There is no mention of internal emails, texts or other communications that might show Pentagon officials taking Trump’s onslaught as a directive to skew the procurement process. Rather, in showing examples of Trump’s bias, Amazon makes the case that it must have altered the outcome, because he is the military commander in chief.

The complaint cited the stream of tweets from Trump that targeted Bezos, Amazon and The Post as evidence of the president’s interference. As Trump attacked those targets, the company alleges, the Pentagon “took numerous actions to systematically remove the advantages of AWS’s technological and experiential superiority” and changed its interpretation of certain technical requirements at the 11th hour.

The complaint alleges that with the president’s interference, the Pentagon “consistently and repeatedly made prejudicial errors, at every step along the way, that systematically favored Microsoft and harmed” Amazon’s cloud business, Amazon Web Services. And Amazon tied that to the president’s anti-Bezos bias.

“The most plausible inference from these facts is simply this: under escalating and overt pressure from President Trump, DoD departed from the rules of procurement and complied — consciously or subconsciously — with its Commander in Chief’s expressed desire to reject AWS’s superior bid,” the company argues in its filing.

The change boosted Amazon’s total price, making its bid less attractive, the filing states. The amount by which Amazon’s offer increased is redacted from the complaint.

Amazon could have sought an order to prevent the Pentagon from immediately moving forward with the new contract. But the filing notes that the Defense Department has said it will not proceed with the contract until at least Feb. 11. So the company determined that seeking an injunction to block the contract was not necessary yet.

Amazon argues that the motivation for Trump’s animus toward Bezos is his ownership of The Post.

Amazon declined to comment beyond its protest filing. Microsoft spokeswoman Janelle Poole said in an emailed statement that the company has “worked hard to continually innovate over the past two years to create better, differentiated offerings” for the Defense Department.

“We have confidence in the qualified staff at the Department of Defense, and we believe the facts will show they ran a detailed, thorough and fair process in determining the needs of the warfighter were best met by Microsoft,” Poole said.

AWS leads the cloud computing market by a long shot. It holds a 48 percent market share, according to the market research firm Gartner, far ahead of Microsoft’s 15.5 percent.

It also has a head start in the national security sector thanks to an earlier $600 million contract that made it the primary cloud provider for the CIA. That contract — which effectively subsidized its development of advanced cybersecurity capabilities needed to protect classified data — made it the only cloud provider that holds the Defense Department’s highest-level cloud computing certification, known as Impact Level 6. Microsoft’s certification is one level below that, although it is moving toward receiving the highest clearance.

The contract immediately became a competitive lightning rod within the commercial cloud computing industry thanks to a Pentagon decision to award it to just one provider. Although JEDI will not be the Pentagon’s only cloud, it will be its largest by far. And because it will effectively become the Defense Department’s primary cloud computing operating system for “tactical edge” devices — connected technologies designed to operate in far-flung war zones — it could give Microsoft a degree of influence over the direction of the Pentagon’s cloud-based technology moving forward.

The surprise award to Microsoft followed more than a year of fierce lobbying by Amazon’s competitors.

Amazon’s complaint is the fourth legal challenge to the Pentagon’s JEDI approach since the project was announced early last year. Through it all, the Defense Department has refused to back off its decision to award JEDI to a single company.

Oracle and IBM separately challenged the Defense Department’s single-provider approach with the Government Accountability Office last year, before bids were even submitted. After both of those protests failed to block the procurement, Oracle, assuming the award would go to Amazon, brought new allegations that Amazon had fixed the process for itself through inappropriate relationships with Defense Department officials. Those conflicts are now the subject of an investigation by the Defense Department’s inspector general.

Court of Federal Claims Judge Eric G. Bruggink issued a ruling in late July that rejected Oracle’s accusations and cleared Amazon of the “organizational conflict of interest” that could have excluded it from the competition. Oracle’s case is now under appeal.

Bruggink has declined to preside over the current case, because of an unspecified conflict, attorneys involved in the case said in a recent conference call. Bruggink owns some Microsoft stock, according to a disclosure form reviewed by The Post. The American Bar Association’s judicial canon holds that a judge should disqualify himself when “the judge’s impartiality might reasonably be questioned.” The canon further specifies this to include cases in which the judge “has a financial interest in the subject matter in controversy or in a party to the proceeding.”

None of those legal challenges succeeded in halting the award. They did, however, manage to delay it for more than a year as defense officials’ time was occupied responding to litigation.

Almost from the start, Oracle fought to prevent the JEDI award from going to Amazon. Oracle’s executives have frequently criticized Amazon’s technology as inferior. In the filing, Amazon alleged that chief executive Safra Catz, who served on the president’s transition team, “advocated against AWS in the JEDI procurement process” at an April 2, 2018, dinner meeting with Trump.

Throughout its litigation, Oracle was criticized for its role in delaying what officials have described as a crucial national security priority. Some of that criticism came from Amazon.

“It is kind of a status quo in government that everything gets protested,” Teresa Carlson, AWS public-sector vice president, said at a recent conference, adding, “which is kind of sad, because it delays innovation.” (Carlson’s comments came before AWS filed its bid protest.)

The procurement took an unexpected turn in late July when Trump asked Esper to reexamine the Pentagon’s approach to JEDI, citing concerns that the contract would go to Amazon, people familiar with the matter told The Post at the time. The directive came soon after he said in a televised news conference that he had received “tremendous complaints” about the contract from Amazon’s competitors, citing Microsoft, Oracle and IBM. Soon afterward, the president retweeted a link to a Fox News segment that referred to JEDI as the “Bezos bailout.”

The Post and CNN reported at the time that a colorful flow chart depicting Defense Department officials and various Bezos-linked individuals landed on the president’s desk. The flowchart had originated from Oracle’s D.C. lobbying shop.

Around that time, Sen. Marco Rubio (R-Fla.), whose campaign has received donations from Oracle co-founder Larry Ellison, asked that the contract be delayed, in separate letters to the Pentagon and the White House. Rubio lobbied the president directly on the matter and spoke with Trump about it by phone, a member of his staff told The Post.

Esper replaced Defense Secretary Jim Mattis in July. Amazon claims that Mattis rejected Trump’s efforts to “screw Amazon,” citing a book by retired Navy Cmdr. Guy Snodgrass, who worked as a speechwriter for Mattis. Snodgrass’s claims have not been independently verified, but Amazon’s filing suggests a connection to Mattis’s departure, calling it “another in an ongoing series of exits from the Trump Administration for individuals who have refused to unquestioningly follow all of the President’s directives.”

The Defense Department also faces unresolved questions about a surprise decision by Esper to recuse himself from the procurement process just days before the award. In statements to the press on the matter, Defense Department spokespeople have said Esper recused himself because his son works for one of the initial bidders, but they have not offered an explanation for why he waited more than two months to recuse himself.

In its filing, Amazon called Esper’s recusal an “unprecedented and bizarre attempt to rewrite the factual record and unsully a process tainted by the President’s intervention.”

Aside from its complaint, Amazon submitted four videos as evidence. The first is a February 2016 campaign rally in which then-candidate Trump said Amazon would “have problems” if he were elected, citing Bezos’s ownership of The Post. The second is a televised news conference from July 18 in which Trump said he would direct aides to investigate Amazon’s role in the JEDI procurement. The third is the Fox News segment that referred to JEDI as the “Bezos bailout.”

The fourth piece of video evidence accompanying Amazon’s complaint is footage from an October confirmation hearing. Dana Deasy, now the Pentagon’s chief information officer, argued that there was a two-tracked process in which Esper’s review of JEDI’s overall approach was separate from the team that was responsible for reviewing bids. He said the source selection team had decided to award the JEDI contract and that, to his knowledge, the team had not been contacted by the White House.

“I feel very confident that at no time were team members that actually took the source selection were influenced with any external, including the White House,” Deasy said.