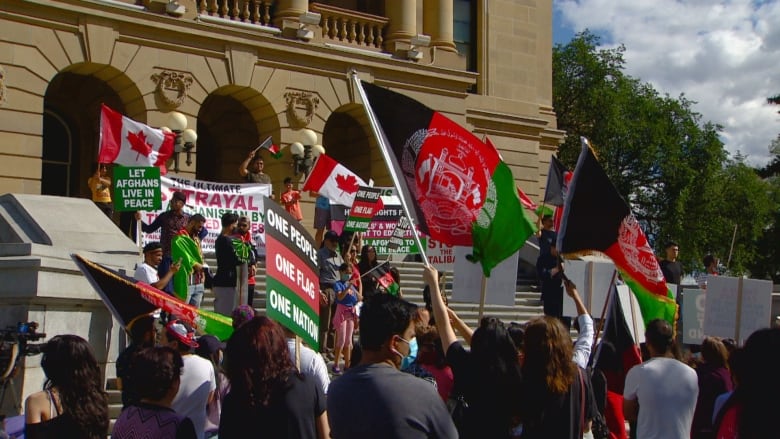 Edmontonian Tassala Attai’s cousin messages her as often as he can, desperately trying to escape Afghanistan.

“I get messages from him all the time, every day asking if something has changed or if there’s a way for him to come to Canada,” she said. “It’s frustrating because these people are actively searching. They have their paperwork. They have whatever it is. It’s very unfortunate that they’re not able to move forward.”

On Saturday, Attai helped organize a rally to draw attention to the plight of her cousin and other loved ones stranded in Afghanistan as the Taliban takes over.

She was among hundreds of people who rallied at the Alberta Legislature grounds to show their support for the people of Afghanistan while pressuring the Canadian government to do more to help. More than 100 also gathered in downtown Calgary.

“As somebody who was looking for a way to make a difference, it was my calling,” Attai said. “So I just came in, trying to be a part of it, trying to do the best that I could for the people who are back home, honestly. They don’t have voices so we have to be their voice right now.”

Along with Attai, Crystal Hakimi spoke at the rally. Both want to encourage people to put pressure on the federal government to help bring more Afghans to Canada.

“We’re all so disappointed with what’s going on in Afghanistan. The people that are left behind, their lives are nothing. And it’s devastating as a Canadian here, with all the liberties that we have to see what’s going on over there with our brothers and sisters.”

Canada’s mission to airlift those fleeing Afghanistan ended on Thursday after helping to evacuate more than 3,700 people from Kabul.

While the federal government says it’s aware there are still Canadian citizens, permanent residents and their families who remain in the country, there are currently no plans for further evacuation flights.