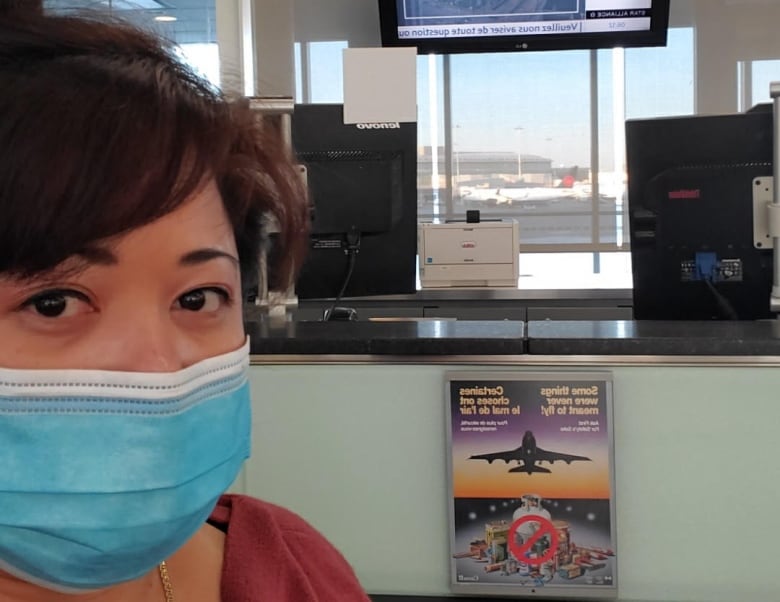 Air Canada has apologized to passenger Mayette Musclow of Kelowna, B.C., after it barred her from flying to Cleveland last month to visit her terminally ill husband.

The airline told CBC News that the mishap occurred due to a misinterpretation of complex border restrictions during the COVID-19 pandemic.

“I was at the airport crying,” said Musclow about the incident. “I didn’t know what to do.”

After she read a CBC News story on Friday — which outlined that Canadians can fly to the U.S. during the pandemic — Musclow booked another flight and flew to Cleveland on Tuesday with no complications.

“I’m so overwhelmed right now, so overjoyed,” she told CBC after passing through U.S. Customs.

To help stop the spread of COVID-19, the Canada-U.S. land border is closed to non-essential traffic on both sides of the border until at least July 21. However, Canadians can still enter the U.S. by plane.

But when Musclow tried to check in for her May 24 flight from Kelowna to Cleveland, she said an Air Canada agent told her the U.S. border was closed to Canadians, and wouldn’t let her board the plane.

“I was so upset because we had three months — my husband has three months [to live] and I wanted to go over there and be with him,” said Musclow.

Her husband, John Sarvis, has cirrhosis of the liver and a 20 per cent chance of dying within the next three months, according to a May 7 doctor’s note provided by Musclow.

She married Sarvis, an American, last year in Akron, Ohio, near Cleveland, and planned to live with him at his home in Akron once her application for an immigrant visa was approved.

When Sarvis received his dire diagnosis last month, Musclow took time off from her job as a care aid, and booked a flight to be with him.

Canadians can still fly to the U.S.?

Musclow booked her flight with United Airlines, but Air Canada was the carrier for the first leg of the trip from Kelowna to Washington D.C. She said when she purchased her ticket by phone, a United agent assured her that she could fly to the U.S. as a Canadian citizen.

According to U.S. Customs and Border Protection (CBP), Canadian travellers can currently fly to the U.S. as long as they haven’t visited Brazil, China, Iran, Ireland, the U.K. or 26 European countries in the Schengen Area 14 days prior.

But Musclow said the Air Canada agent at the Kelowna airport told her she needed written permission to travel to the U.S., and wouldn’t issue her a boarding pass.

Musclow said she consulted a second Air Canada agent at the airport who told her that if the airline let her enter the U.S., the U.S. government would fine her $1,000.

“I was shaking,” said Musclow. “It caused me a lot of stress and tears for days. I was just crushed.”

Dr. Ashley Cook is currently in Windsor, while her husband Dr. Tom Cook is in Michigan. The couple is expecting their first child, and the ongoing border restrictions have introduced complications to an already tricky pregnancy. 1:49

Musclow said United Airlines returned the reward miles she used to book the flight, but didn’t refund the $130 she paid in taxes and fees.

United told CBC News on Tuesday it will refund the money.

After being contacted by CBC, Air Canada sent Musclow an email on Tuesday offering a $500 travel voucher and its “sincere apologies” for what happened to her at check-in.

Musclow being denied boarding was an “unfortunate situation” that “arose due to a misinterpretation of the complex and changing rules around border closings,” Air Canada spokesperson Peter Fitzpatrick told CBC News in an email.

Because the U.S. land border is closed to Canadian travellers, many Canadians have incorrectly assumed they can’t fly to the U.S.

Two days before Musclow’s flight, Air Canada announced that it had resumed flying to the U.S. The online announcement included a link to a CBP website which states that Canadians can enter the country.

Because she was denied boarding, Musclow was afraid to book another flight. She said she started losing hope of seeing her husband anytime soon, after learning last week that the Canada-U.S. land border closure would be extended past its then end-date of June 21.

“I was sitting in my bed and saying, ‘What’s happening?'” said Musclow. “Like, I’m just gonna go there and bury my husband when the border’s open?”

Musclow had renewed hope of travelling to Cleveland after she read the June 12 CBC News article about Canadians flying to the U.S.

The story featured a B.C. woman who had who had flown from Vancouver to Seattle last month to visit her sick grandson.

“It was a big, big relief when I found out this lady was able to fly to the U.S.,” said Musclow. “I was like, ‘Why did the agent at Air Canada turn me down?'”

On her second attempt to fly to Cleveland, Air Canada let her board her flight. Musclow landed in Cleveland on Tuesday night.