After my leg injury, I quit standup. Then I realized comedy is my pain relief 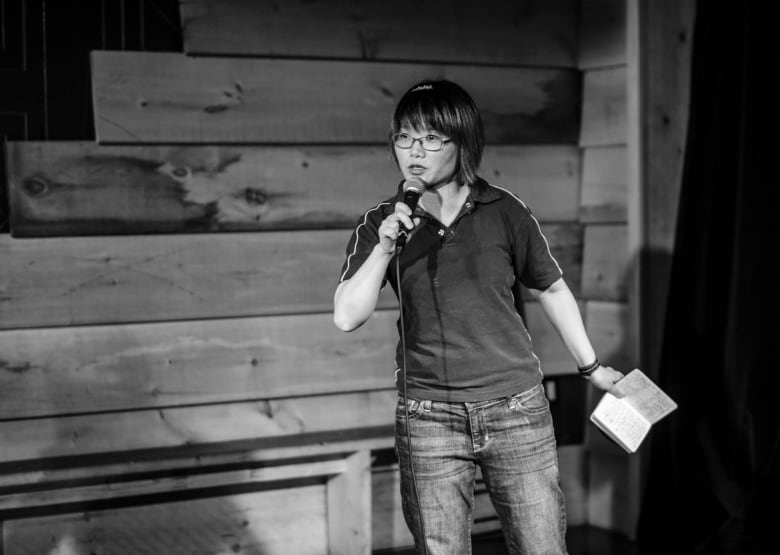 This First Person article is by Andie Hong, a comedian in Toronto. For more information about CBC’s First Person stories, please see the FAQ.

In August 2020, I went bike riding with a friend in Toronto. He suggested a route with a steep downhill incline. I was scared but we didn’t think anything bad would happen.

Guess what? It did.

I lost control, fell off the bike, and broke my right leg. My surgeon said it was one of the worst leg injuries he has seen in his entire professional career.

From there, the life I had known ended.

I was completely immobile for three months and spent a year in physiotherapy. Today, I can’t walk without a cane.

When I told my family about the injury, they asked me, “What were you doing there?”

What was I doing here in Canada?

I don’t know, breaking my leg and being broke?

Before my injury, comedy was all I wanted to do. I had a monthly show and I hit up open mics around Toronto. I had been invited to audition for the Just For Laughs Comedy Festival.

Live comedy was dead during the early months of the pandemic, but I found different outlets for my passion in writing humour articles and making comedy videos.

However after my injury, my perspective changed. I envied my sister and brother because it felt like they were more settled and had age-appropriate lives. Meanwhile, I was still living with roommates. I didn’t have any money saved. Hell, I didn’t even have a job.

But the biggest difference was they were able-bodied, and suddenly I was not.

I stopped caring about comedy. All I could think of was whether or not I would walk again. I wallowed and spent a lot of time sleeping and playing video games.

I had many ridiculous thoughts. If I had never left Korea and come to Canada, would I have been injured? Would I have had a “successful life” like my sister and brother: married, kid, my own place?

I had moved to Canada because I wanted to improve my English and I like western culture.

But after my injury, moving to Canada was feeling like the biggest mistake I had ever made. I wanted to reverse everything. I wanted to fix it. I went back to Korea last summer for a few weeks to look after my dad who was sick, and thought about staying permanently.

My dad said he would cook for me if I stayed. My brother said I should think more aboutstaying. My sister asked me what I would do if I stayed. I suggested maybe working in a call centre?

But I wanted to get back home to Toronto and to my adorable cat. Oh, dear Krampus!

I also wanted a fresh start so I enrolled in a business school, and it was easier to do that in Canada as a mature student. I started imagining my future as an accountant. No more comedy. I was convinced I had wasted my life while I could have had a safe, well-paying job.

But even as I pursued my new life as an accountant, I found that I had a ton of things to say about my injury. I started writing short little snippets on Facebook about my time in the hospital, and to my surprise, people responded positively to that.

Then in December, a friend asked me if I wanted to do a 10-minute spot in his show.

Many people asked me if I was hit by a car. But, let me tell you… If I did get hit by a car, I wouldn’t be standing here telling you this story. I would be lying in my mansion, smoking a cigar because I would have sued that person. I ain’t got time to get hit by a KIA, only Mercedes. It was a bicycle accident. That’s why I’m in… a bar.

I did well enough that I wanted to do more. I joined a sketch troupe and perform in a revue. I did a Just For Laughs showcase in April. People said it was good to see me onstage, but I would dismiss it.

Don’t say that! I have a bright future as an accountant. This is temporary.

But the truth is I love getting laughs on stage. It’s so addictive: I’ve created a monthly comedy show and am recording my album later this year.

My injury and seeing my family in Korea made me quit comedy. But it turned out that comedy couldn’t get rid of me.

I still envy my siblings, I’m still pursuing accounting, and my leg still hurts a lot. But on stage, I forget all these things. Performing comedy is my pain relief. I wanted to get rid of comedy from my life, truly. Because tragedy can be funny, right?

Andie Hong is a standup comedian and sketch writer. She writes and performs in a sketch troupe Don Valley Girls and hosts a monthly show Laugh at Me, Baby at Comedy Bar.