After Bomb Threat, Malaysia Airline Passengers Tackle Man — And Then Sit On Tarmac 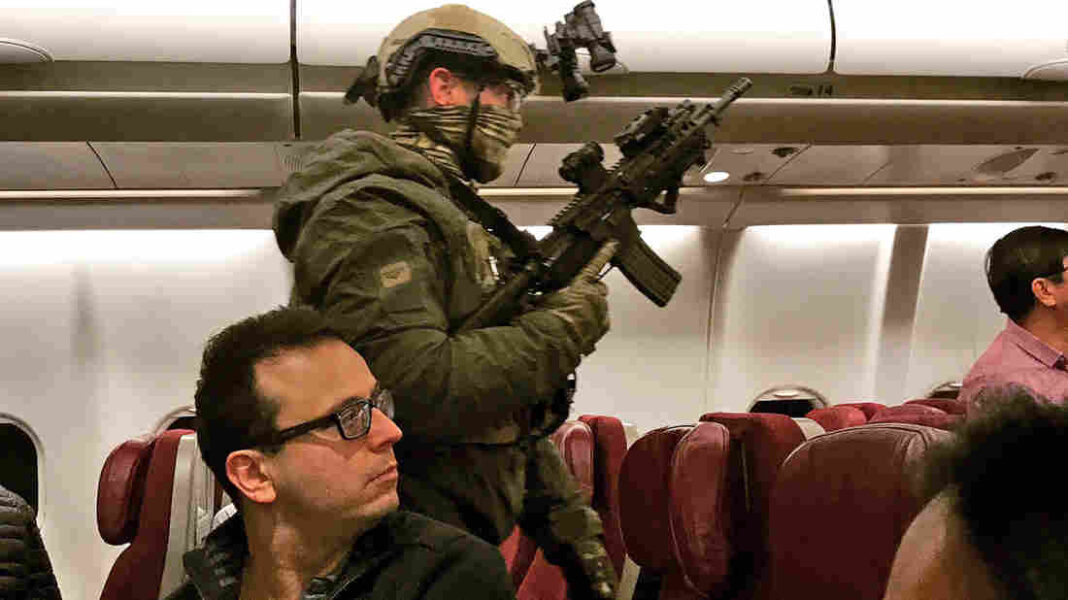 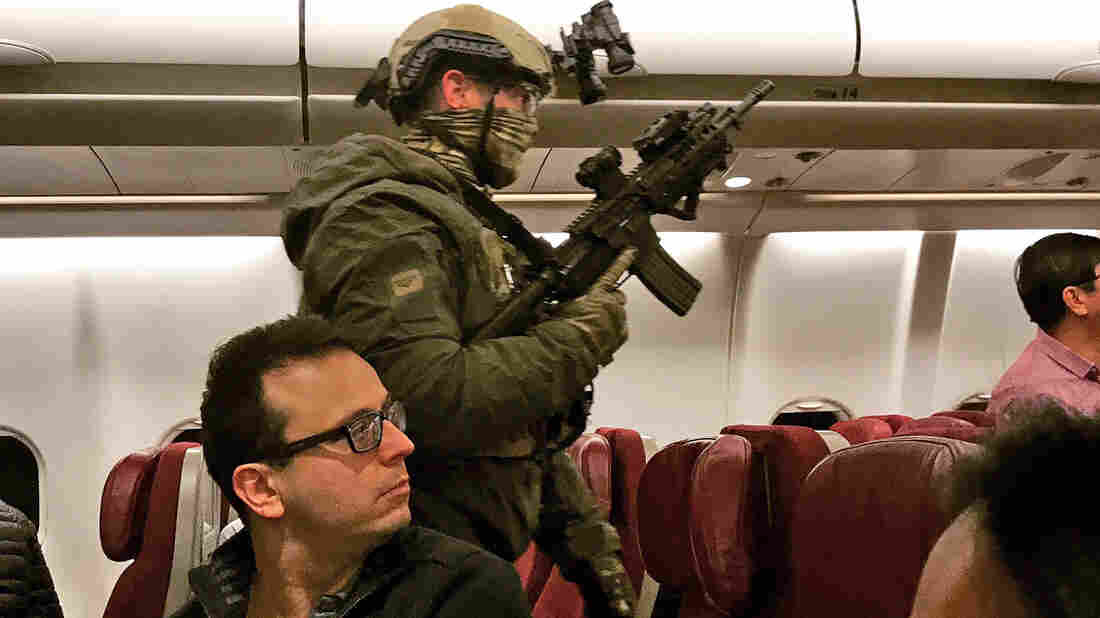 Police board a Malaysia Airlines jetliner in Melbourne, Australia, after a man who said he had a bomb was tackled and tied up. Andrew Leconcelli/AP hide caption

Police board a Malaysia Airlines jetliner in Melbourne, Australia, after a man who said he had a bomb was tackled and tied up.

Passengers are being praised for subduing a man who threatened to blow up their Malaysia Airline jet shortly after takeoff in Melbourne, Australia, Wednesday. The plane safely returned to the airport, and by the time police arrived, the man was tied up.

But passengers are also complaining that they were forced to sit on the plane for 90 minutes after landing, along with what what was, for an agonizing stretch of time, suspected to be an explosive. It was later determined to be either a type of speaker or phone charger.

Witnesses say Manodh Marks, 25, sparked alarm on the overnight flight when he began making threats and walking in the aisle, holding an electronic device and shouting “I’m going to blow this f****** plane up.”

Marks “tried to enter the cockpit,” say police, but he was tackled by passengers and crew members on the plane, which was carrying more than 330 people. Videos posted to social media show the suspect tied up and face down, with a crew member bracing himself against his back and a passenger sitting in the seat above him.

“I would say that it would have been quite heroic for the crew and passengers to restrain this person,” Victorian Police Chief Commissioner Graham Ashton said.

After landing back at Melbourne Airport, the plane was taxied to a spot far from the terminal. Heavily armed police wearing full tactical gear came aboard and arrested the man.

While passengers said they were glad to be safe, they were also frustrated that police left the suspect’s device on the plane with them as they sat on the tarmac for more than an hour. The police say they needed the time to evaluate the situation.

The device Marks held has been described as a Bluetooth speaker. The passengers who took action included former Australian Football League player Andrew Leoncelli, who told Melbourne radio station 3AW that he’d never seen anything like the device, adding that it was the size of a watermelon and had antennae.

Here’s Leoncelli’s account of the attempted takeover in the sky, and the aftermath:

“So, I approached him. Then he ran down the side and then he ended up going down the back of the plane. And then two lads grabbed him and disarmed him and bashed the crap out of him and then put hog ties on him and took the giant black thing that was [in] his hand out of his hand. And then that thing sat on the plane for the next hour and a half.”

The time that elapsed before the device was removed and passengers were allowed to leave the plane was needed to ensure their safety, Chief Commissioner Ashton said, noting the initial uncertainty over whether the incident might have been a terrorist act.

It took around 90 minutes to ascertain that there was no longer any danger, Ashton said, adding that he can “certainly appreciate when you’re on a plane in that situation, one minute can seem like an hour, can seem like an interminable wait.”

The wait seemed excessive, a passenger named Laura tells Australia’s ABC. She was seated only feet away from what could have been an explosive device and didn’t want to provide her last name.

“I think the worst part was that we were sitting on the aircraft for just under two hours, and we were under the impression that there was still an explosive on the aircraft,” she said. “We were online getting the live feed from news and that was when a lot of people found out it was [feared to be] an explosive, so a lot of people started to freak out once we’d actually touched down.”

The delay was not “unacceptable,” Ashton said in response to criticisms. He noted that the passengers’ safety was the main concern, and that the suspect was safely taken off the plane.

Marks is a native of Sri Lanka who’s in Australia to attend culinary school, officials say. His “history would appear to have mental illness,” Police Superintendent Tony Langdon said. Marks now faces charges of endangering the safety of an aircraft and making threats or false statements.

Coming three years after Malaysia Airlines Flight 370 famously went missing during a flight from from Kuala Lumpur to Beijing, the incident jangled nerves and caused delays for travelers.

After they were allowed to deboard the plane, passengers were interviewed on the tarmac and were detained for several additional hours at the airport. Their flight, which had been scheduled to leave after 11 p.m. Wednesday, was rescheduled for an 8 p.m. departure Thursday, Malaysia Airlines said.