A sampling of highest and lowest-paid workers on N.B. picket lines 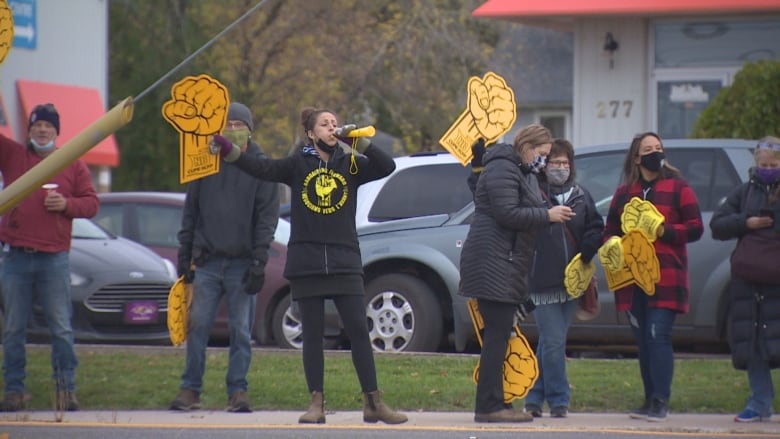 Wages are a central issue in the contract dispute between the Higgs government and 10 locals of the Canadian Union of Public Employees whose members went on strike Friday.

And depending on who you talk to, their wages are either very low, or very high.

Some are working two jobs to make ends meet, he said, and have only $20 left for two weeks of groceries after paying their bills.

Two per cent raises a year would only amount to an additional $2.50/hour over the span of the contract for some, Drost said.

CUPE is looking for pay increases of three per cent a year over four years.

On the other hand, said Premier Blaine Higgs, some of the workers on strike are making 30 to 40 per cent more than their counterparts in the private sector.

Higgs said his government’s offer of a total increase of 8.5 per cent over five years is reasonable and was recently accepted by three other bargaining units. Those who settled include medical specialists, professional support workers in schools and Crown prosecutors.

Here’s a closer look at a few of the highest and lowest-paying jobs at issue — and how they stack up to what’s paid across the country.

Across Canada, in the private and public sectors, average wages for this job class are $12.50 to $21.00 an hour, according to the federal government’s Job Bank.

A current posting for a government laundry job in British Columbia has wages of $19.68 to $21.35/hour.

Average wages for construction labourers across Canada in the public and private sectors are $15 to $34/hour, according to the Job Bank.

Current postings for jobs in the private sector in New Brunswick are offering $12 to $20 an hour.

Average wages for this job class, public and private, across Canada are $13 to $27 an hour.

The Job Bank lists no rates lower than that in other provinces.

Recent postings for government positions in Nova Scotia and P.E.I. advertised rates of $46.65 to $59.71 an hour.

A health authority in Newfoundland and Labrador is offering $35.40 to $39.61 an hour

At WorkplaceNL In Newfoundland and Labrador, investigators are paid $56,564 to 62,405 a year. Their work week is 35 hours long.