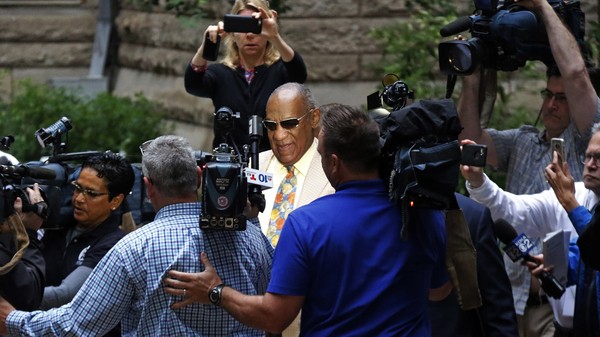 Jeanette Woods talks with NPR’s Michel Martin about her podcast, Cosby Unraveled. It explores Bill Cosby’s beginnings in the projects of North Philadelphia, the peak of his influence and his downfall.

Now it’s time for our regular feature Words You’ll Hear. That’s where we try to understand some of the stories we’ll be hearing more about in the coming days by parsing some of the words connected to it. For today’s word, we’re thinking more about a name, Andrea Constand. She’s a former basketball coach at Temple University in Philadelphia. She says that Bill Cosby, the famed comedian, drugged and then molested her at his suburban Philadelphia home in 2004. Bill Cosby says the encounter was consensual.

Now, you may know that some 60 women have come forward in recent years to say that Cosby did the same or similar things to them. But of all of these allegations, those made by Constand are the only ones that have resulted in criminal charges. That trial starts tomorrow. And among those who will be following the trial are the creators of a podcast by member station WHYY called Cosby Unraveled. It examines Bill Cosby’s connection to Philadelphia and some of the larger issues that make this case stand out.

ANNETTE JOHN-HALL, BYLINE: Compared to cases like Woody Allen and Roman Polanski, it’s hard for many African-Americans to not see race at play.

MARTIN: That voice is the host of the podcast Annette John-Hall. Jeanette Woods is the co-producer of the podcast, and she is with us now from WHYY in Philadelphia. Thanks so much for being with us.

MARTIN: Jeanette, first of all, can you give us some of the basics around the trial that starts tomorrow? As we said, you know, some 60 women have come forward since 2014 saying they were sexually assaulted by Cosby, but this is the only one that’s going to a criminal proceeding. Can you just briefly explain why that is?

MARTIN: Do we expect any of the other women who have made allegations to testify?

WOODS: There is one woman. She’s being identified as victim six, and she will testify. Obviously, they tried not to have women testify against him. They got that one woman in. That’s the only other person.

MARTIN: So tell us what is expected to be Bill Cosby’s defense.

WOODS: I think that his defense is going to be or at least his lawyers are going to go after Constand on a number of fronts. There’s no physical evidence. She did not do her complaint until after a year had passed after the incident. They’ll really go after her credibility, and I think that it’s going to be a real fight on both sides.

MARTIN: You know this story is painful and disturbing for many people for so many reasons. Tell me what you’re trying to do with the podcast.

WOODS: What we wanted to do was to look back at Cosby and really say, hey, this is a guy from Philadelphia. This is really a Philadelphia story in a lot of ways. And here we have a really unique microcosm of opinions about him. We talk to a lot of people who are not experts, so we wanted to ask them, you know, what do you think and why?

And what we started to get at is there’s a lot of conflict for people. So, yes, all of these allegations if true are horrendous, and that’s on one hand and then on the other hand, Cosby did a huge amount of social good for the black community. So what does it mean that someone we held in this high regard is being accused of being a sexual predator? There’s a wrestling around race and class and women’s rights and gender. So there’s a lot going on, and we’ve felt let’s try and get at that.

WOODS: Thank you so much.