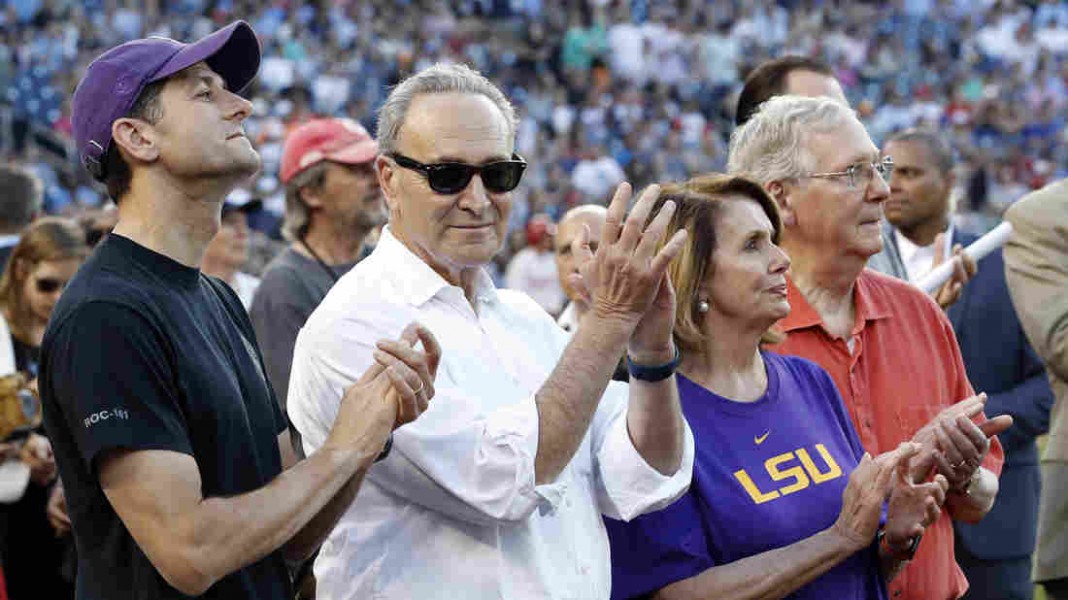 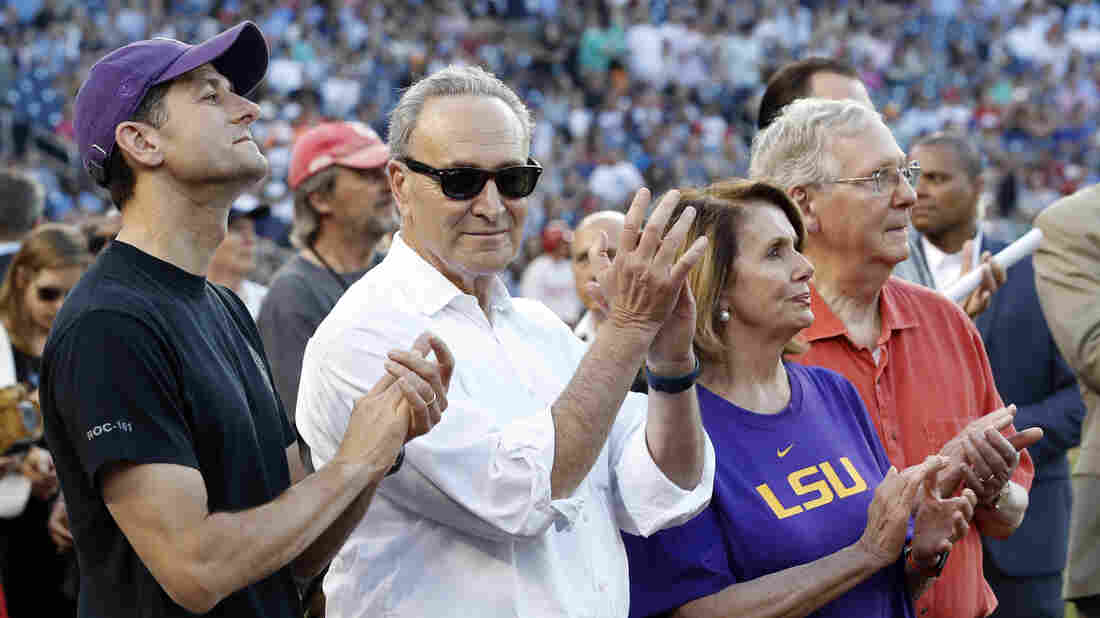 Top Republican and Democratic leaders of the House and Senate attend the congressional baseball game in Washington, D.C., Thursday. GOP members were practicing for the game Wednesday when a gunman opened fire at an Alexandria, Va., ballfield. Alex Brandon/AP hide caption

Top Republican and Democratic leaders of the House and Senate attend the congressional baseball game in Washington, D.C., Thursday. GOP members were practicing for the game Wednesday when a gunman opened fire at an Alexandria, Va., ballfield.

Before James Hodgkinson left his home in Belleville, Ill., in March, he sold nearly everything he owned from his businesses. He told his wife that he was headed to Washington, D.C., “to work on taxes.”

His wife, Sue Hodgkinson, spoke publicly on Thursday evening for the first time since the shooting. With the chief deputy of the St. Clair County Sheriff’s Department by her side, she said she felt “horrible” about the actions of her husband of nearly 30 years.

“I had no idea this was going to happen, and I don’t know what to say about it,” she said with difficulty, through tears. “I can’t wrap my head around it, okay? And I just want my neighbors to be in peace, and you guys leave them alone.”

She said she knew of no obvious catalyst for her husband’s leaving, though she mentioned her daughter had recently moved back home with a child. She said Hodgkinson was home all day, and she suspected he left because “he just wanted a break from it.”

When he left, she said, Hodgkinson told her he was going to Washington, D.C. to “work with people to change the tax brackets.”

The FBI said yesterday that it believed Hodgkinson was living out of his van in Alexandria. He had run out of money, his wife told reporters.

Earlier today, Congressman Steve Scalise underwent a second surgery related to his internal injuries and a broken bone in his leg. He remains in critical condition, but has improved in the last 24 hours. The Congressman will require additional operations, and will be in the hospital for some time. At the request of the family, we will continue to provide periodic updates.

Scalise had surgery on Thursday that a MedStar Washington Hospital Center statement said was related to his internal injuries and a broken bone in his leg. He is still listed in critical condition.The statement noted that he has done better over the past 24 hours but will require further surgery and will stay in the hospital for some time.

The hospital said Scalise was struck by a single rifle shot to the left hip that went through his pelvis, “fracturing bones, injuring internal organs, and causing severe bleeding.”

Matt Mika, a lobbyist for Tyson Foods, is also in critical condition. In a statement released Thursday morning, his family said Mika was shot in the chest and arm and suffered massive trauma, the Detroit News reports. While he is conscious and able to communicate through notes, the family says Mika requires medical equipment to breathe and will need additional surgeries.

U.S. Capitol Police officer Crystal Griner was shot in the ankle and remains hospitalized in good condition, according to The Washington Post. A congressional staffer, Zach Barth, was shot in the leg; he was released from the hospital Wednesday afternoon, the Post reports.

The FBI, ATF, U.S. Capitol Police and Alexandria Police said Thursday that said the shooter’s weapons were a 9 mm handgun and a 7.62 caliber rifle, which he appears to have purchased legally.

Richard Wagner, chief deputy of the St. Clair County, Ill., Sheriff’s Dept., said there was nothing in Hodgkinson’s record that would prevent him from legally owning firearms in Illinois.

Wagner said there was no way to predict that Hodgkinson would take such violent action. “From everything we’ve known in our interactions with him, he never tipped off and gave any indication that he was violent in any way.”

The FBI said it had processed a white conversion van owned by Hodgkinson, which was parked at the YMCA adjacent to where the shooting happened. The bureau said it had recovered a cell phone, computer, and camera in the van.

Yesterday morning’s baseball practice was in preparation for the Congressional Baseball Game this evening at Nationals Park in Washington – which took place as scheduled. Tickets for the game were selling at the rate of 500 per hour following the shooting, with proceeds benefiting a number of local charities.

Wounded U.S. Capitol Police officer David Bailey set aside one of his crutches and threw out the game’s first pitch.