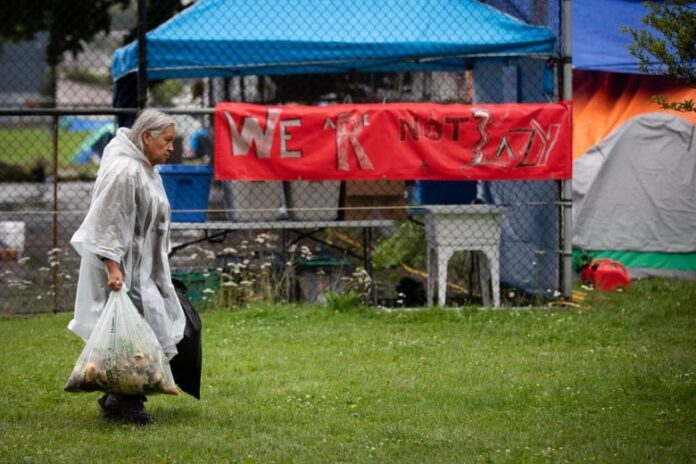 The results of a B.C. research project that gave thousands of dollars to homeless people are in and, according to one researcher, could challenge stereotypes about people “living on the margins.”

The New Leaf project is a joint study started in 2018 by Foundations for Social Change, a Vancouver-based charitable organization, and the University of British Columbia. After giving homeless Lower Mainland residents cash payments of $7,500, researchers checked on them over a year to see how they were faring.

All 115 participants, ranging in age between 19 and 64, had been homeless for at least six months and were not struggling with serious substance use or mental health issues. Of those, 50 people were chosen at random to be given the cash, while the others formed a control group that did not receive any money.

“I had no expectations and really high hopes,” said Claire Williams, CEO of Foundations for Social Change, on CBC’s The Early Edition on Tuesday.

What researchers found after 12 months, she said, was “beautifully surprising.”

Those who received the money also managed it well over the course of a year.

“We saw people retain over $1,000 for 12 months, which is remarkable in the Lower Mainland,” said Williams.

On average, cash recipients spent 52 per cent of their money on food and rent, 15 per cent on other items such as medications and bills, and 16 per cent on clothes and transportation.

Almost 70 per cent of people who received the payments were food secure after one month. In comparison, spending on alcohol, cigarettes and drugs went down, on average, by 39 per cent.

Too often people dismiss the idea of giving homeless people money because they assume it will be mismanaged, Williams said.

“It challenges stereotypes we have here in the West about how to help people living on the margins,” she said.

Ray, whose last name project researchers did not release for privacy reasons, was living in an emergency shelter before receiving money from the New Leaf project.

He said the money helped him get housing and take a computer class he needed to work toward his goal of becoming a frontline worker for people with substance addictions.

WATCH | Ray, a study participant, says what the money meant for him:

“I kind of want to give back to where I came from,” said Ray. “A seed can grow into an oak tree and I might one day be that important person that has that powerful voice.”

According to Williams, providing people like Ray the cash they need to get ahead also helps Canadian taxpayers.

She said it costs, on average, $55,000 annually for social and health services for one homeless individual. According to study data, the project saved the shelter system approximately $8,100 per person for a total of roughly $405,000 over one year for all 50.

“The common belief is that the status quo is cheap… in fact, it is incredibly expensive,” said Williams.

According to the 2018 B.C. Homeless Count, there are about 7,600 homeless people living in the province — meaning a group of 115 study participants is relatively small.

To hear the complete interview with Claire Williams, CEO of Foundations for Social Change, on The Early Edition, tap here.

5 arrested after standing in way of Trans Mountain pipeline construction in B.C. Interior

Government calls on private sector to come up with compostable, recyclable pandemic gear

Can Quebec find a balance between a lockdown and freedom?