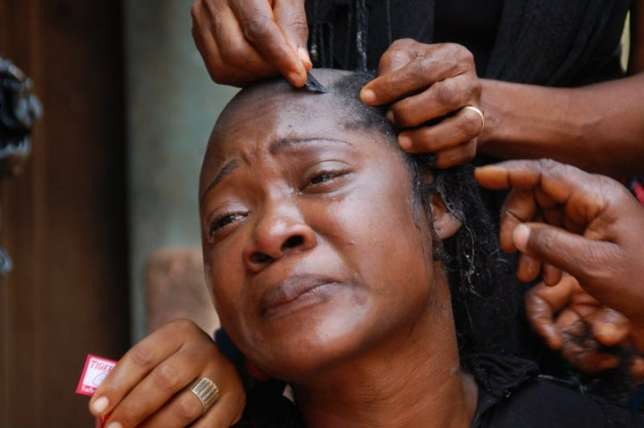 Some strange and terrible customs still exist in Nigeria many years after civilization.

These communities practise certain traditions that will shock you out of your seats.

A couple tied together by Magun (timeofgist)

The Yoruba ethnic group use Magun for adulterers and most times the outcome is not palatable as the offender could lose his/her life.

The Magun is placed on a woman without her being aware of it either by her husband or his family. If she commits adultery, her lover could end up losing his life or getting stuck while in the act.

In some Nigerian cultures, when a man dies, the wife could be inherited by one of the man’s brothers. Relatives use it as a way to access the late man’s wealth. Although, this practise is becoming a thing of the past as women and society is rejecting it.

ALSO READ: 10 African waterfalls to see before you die

A common practice among the Southern Nigerians. When a man or woman is suspected to either be a witch or a wizard due to strange occurrences or deaths in the family or community. Such person is taken to a witch doctor to undergo all kinds of torture to force the truth out of them.

In some Nigerian cultures, the widow is forced to drink the water used in washing her husband’s corpse.

Family members of the deceased also forcefully shave her hair and make her sleep alongside the corpse. This is done to prove that the widow is not responsible for her husband’s death.

Note that this culture is gradually going out of practise.

Female Circumcision still practiced in some parts of Nigeria (Reuters)

Many tribes in Africa still follow this scary tradition. Nigeria is one of the countries in Africa where female circumcision is widely practised. This is meant to preserve the chastity of women.

The Fulani tribes practise Sharo before getting married. Here the groom is beaten by the older members of the community so as to earn a wife and respect. If the man is not strong enough to bare the pain, the wedding is called off.

Other than flogging, the bride family can pick Koowgal, which is a dowry payment option or the Kabbal, an Islamic ceremony similar to marriage but in the absence of the bride and groom.

Practised by the Efiks, the fattening room is a room where young women are kept and prepared for womanhood. In times past, being fat is equivalent to being prosperous and healthy.