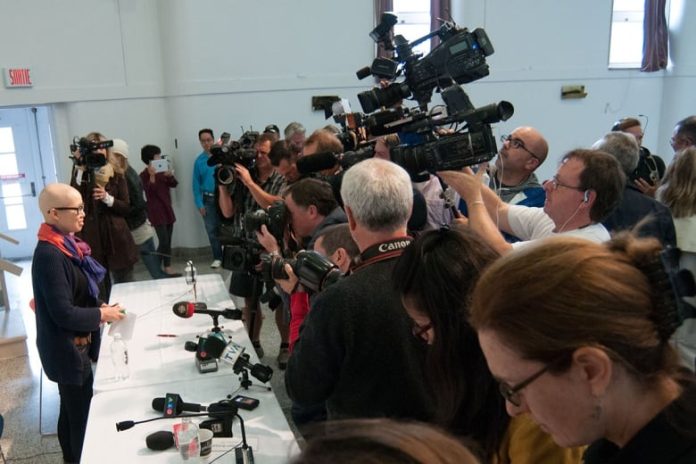 But it all changed in the beginning of June, when Nguyen, a single mother, says she first noticed bruises on Minh’s legs and small red dots under her skin.

Just a week later, after multiple tests at Montreal’s Sainte-Justine children’s hospital, Nguyen got the news that Minh had Medullary Aplasia — a rare blood disease that stops the production of red blood cells, white blood cells and platelets.

Within weeks, Nguyen watched her only child receiving multiple blood transfusions and being repeatedly hospitalized — even marking her fourth birthday at Sainte-Justine’s.

“She has at least three transfusions every week for her platelets, for her blood. Her white blood count is zero right now. She’s not protecting herself against infection,” said Nguyen.

“It’s a constant of going to the hospital, (getting a) transfusion until we can get the cure .… Two months ago she’s a perfectly healthy child and I cannot tell you how it has affected us.”

The search for the perfect donor

Although the cure for Minh’s condition is relatively straightforward — receiving a stem cell transplant from a compatible donor — finding a match for Minh has been difficult because she is half Caucasian, half Vietnamese.

Around 70 per cent of donors on the international registry are Caucasian, Nguyen says. Considering that donors need to have the same ethnic background as the stem cell recipient, Nguyen says Minh’s chances of a match are slim, or “one in one million.”

Mai Duong, co-founder of Swab The World, an organization committed to boosting ethnic diversity in the worldwide stem cell donor base, experienced the same challenge when she had a relapse of leukemia in 2014.

As someone with Vietnamese heritage, Duong says out of the 25 million donors that were listed on the international donor bank in 2014, no one was compatible enough to be her donor.

“Minh’s case, it’s the same story as mine. By default, BIPOC (Black, Indigenous and people of colour) communities don’t have the fair chance … we don’t have that representation on the stem cell registries all around the world,” said Duong.

Duong heard about Minh’s situation when she came across one of Nguyen’s Facebook posts that garnered hundreds of comments and thousands of shares. She says it reminded her of her own public campaign to find a donor in 2014.

“It’s bringing me back to the state of how difficult it is, and how the general public want(s) to help but they don’t know anything about it. It’s so unfortunate,” said Duong.

Nguyen notes that the longer they wait for a stem cell donor for Minh, the greater the risk of infection. In the event that they cannot find a match, Nguyen says the doctors will try all other options — treatments that could leave Minh susceptible to deadly viruses and infections.

“They don’t want to tell me the risk of survival because they’re waiting for the stem cell (donation),” said Nguyen. “But they tell me that the next year will be hard.”

Nguyen says Minh has adjusted relatively well to all of the changes that have happened since her diagnosis.

“She’s much stronger than me in terms of resilience .… For her she doesn’t really understand why she cannot go to the park, why she cannot see friends … because she gets sick really easily (and) has no immune defence,” said Nguyen, who noted that Minh was hospitalized June 27, for the third time this month.

“But she’s a happy child. When she sees mom crying, she said ‘I’m here for you,'” said Nguyen, her voice shaky, on the verge of tears.

Nguyen says it’s been a heartbreaking few weeks but, she has found comfort in all the support from the public.

“People are extremely generous … A lot of people have been telling me that they just registered themselves,” said Nguyen.

“For me, every person that registers, it’s like a hope … If it doesn’t help Minh in my heart (I hope) that it might help another child.”

In the coming weeks Duong says Swab The World is planning a big push to help Minh, with the release of a video and billboard campaign in Montreal, Toronto and Vancouver.

This includes sharing information about the process of becoming a donor and registering through Héma-Quebec.

“So when you’re registering for Minh, you have also to keep in mind that you might not be a match for her, but you could be a match for somebody else.”