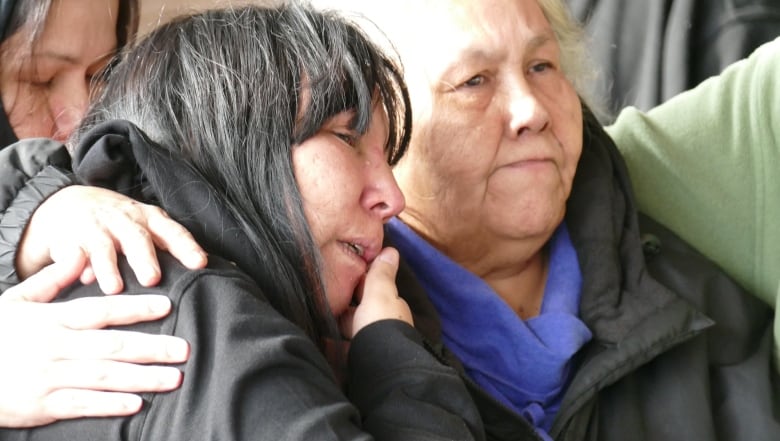 A three-year-old boy, who was stabbed multiple times while sleeping Wednesday morning in his Winnipeg home, was taken off life-support and died on Saturday, a family spokesperson said.

Darryl Contois, who has been speaking on behalf of the family, announced Hunter Straight-Smith’s death in a message Saturday afternoon.

Hunter was found with multiple stab wounds when police arrived at a house on Pritchard Avenue, in the city’s North End, around 2:30 a.m. CT on Wednesday.

Hunter was taken to hospital in grave condition, given two blood transfusions and put on life support. He was taken off life support Saturday afternoon, his aunt Roxanne Moar told CBC News.

Hunter’s mother, Clarice Smith, was holding his hand when he died, Moar said.

Bianca Smith, another one of Hunter’s aunts, said she’s feeling drained and torn inside.

“He was like my own,” she said in a message on Saturday.

“My life forever changed. I don’t think this even hit me yet and I don’t know how I’m gonna handle this when it does,” she wrote in an earlier Facebook post.

Police said on the night Hunter was stabbed, Jensen, who is not the child’s biological father, was with Smith — his on-again, off-again girlfriend — at a location on Main Street when they got into an argument that escalated into a violent assault.

Clarice Smith suffered a number of injuries in that incident, police said.

“They’re not believed to be life-threatening, but I don’t want to characterize them as minor either,” Const. Jay Murray said earlier this week.

From there, police said Jensen walked to the home a few blocks away on Pritchard Avenue, between Salter and Charles streets, and attacked Hunter.

According to court records, Jensen was charged in July with assault with a weapon and uttering threats against the child’s mother.

Naomi Nicholas, a councillor with Brokenhead Ojibway Nation, a community located about 65 kilometres northeast of Winnipeg, spoke with CBC News on behalf of Hunter’s father.

“He wants the entire world to know that he loved his son,” she said while choking back tears, adding that he’s heavily grieving right now.

He wanted her to share Hunter’s last moments, when he squeezed his father’s hand after being taken off life support, Nicholas said.

Watch as Nicholas relays a message on behalf of Hunter’s father:

Naomi Nicholas, a councillor with Brokenhead Ojibway Nation, discusses Hunter Straight-Smith’s death and relays a message from the boy’s father. 6:54

“It’s been truly devastating to the family. It’s devastation for the whole world,” she said. “I’m hoping this brings awareness that we need to protect all of our children.”

Nicholas said the father and his family are arranging a wake that will be held in Brokenhead Ojibway Nation.

Const. Rob Carver with the Winnipeg Police Service said during a Saturday press conference that everyone in the community is affected by this death.

Two vigils were held earlier this week in support of the child.

Volunteers from Bear Clan Patrol provided some meals and coffee for the family while they were at hospital and held a sage ritual in honour of Hunter prior to patrolling the streets Saturday night.

“The family has to live with that every day and will for the rest of their lives. People in the community who may not even have known the individual but live there are traumatized when they know someone’s been killed on their block or their street or their community,” Carver said.

“I think it touches everyone who hears about it in different ways.”

He said first responding officers are traumatized, as well.

When charges are laid in investigations related to assaults, those charges will not be upgraded until “specifics change,” Carver told media during Saturday’s press conference.

“If the victim of any situation does not survive those injuries and that death is directly related to those injuries, then investigators will move very quickly to upgrade those charges to homicide-related charges,” Carver said.

My condolences to the family of Hunter Straight Smith. Gone too soon.<br>We must do better for all our kids

Hunter’s death on Saturday afternoon followed a string of violence in Winnipeg.

Last weekend saw three homicides, including the death of a 14-year-old girl who was stabbed at a Saturday night house party on Kinver Avenue, as well as a double homicide on Ross Avenue early Sunday morning.

Winnipeg police were investigating the death of a man found critically injured outside a home in the city’s West End Thursday morning. One person is dead and another was sent to hospital after a shooting at a nightclub in the Exchange District early Saturday morning.