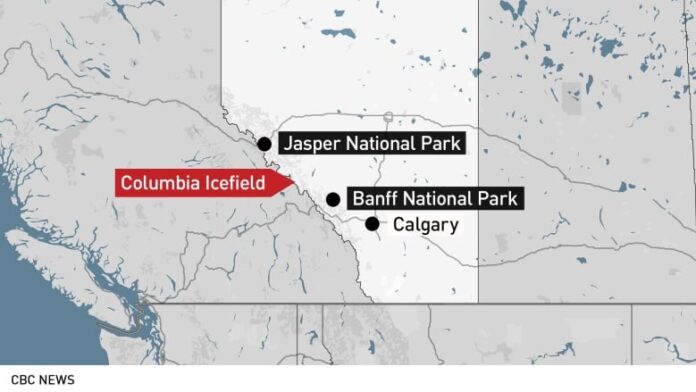 Three people are dead and 24 injured after a glacier sight-seeing bus rolled over near the Columbia Icefield in Alberta’s Jasper National Park.

RCMP Cpl. Leigh Drinkwater said three adults were killed out of a total of 27 on board.

No names are being released as next of kin notifications are underway.

A total of 24 injured people were transported from the crash site to a triage area by helicopters chartered by Parks Canada. From there, Shock Trauma Air Rescue Service (STARS) air ambulance and ground ambulances transported the patients to hospitals in Edmonton, Grande Prairie, Hinton and Calgary.

Drinkwater said the RCMP Jasper detachment, other police detachments and numerous fire departments, paramedics and Parks Canada responded to the scene of the rollover on the glacier’s moraine at approximately 1 p.m. local time on Saturday.

EMS crews from nine nearby cities and towns responded.

“Our thoughts and deepest sympathies are with the families and loved ones of the deceased, and with all of the patients impacted by this tragedy,” read an emailed release from AHS.

Tanya Otis with Pursuit, a company that runs sight-seeing tours of the Athabasca Glacier, said one of its Ice Explorer off-road buses overturned en route to the glacier.

“We will provide additional details as they become available,” Otis said. “Our immediate concern is with the injured and their families and we are supporting the efforts of first responders.”

Photos posted to social media show the red and white bus flipped onto its roof on a rocky slope near the Athabasca Glacier, which is one of the toes of the Columbia Icefield.

RCMP are investigating the cause of the rollover with the support of a collision analyst.

Randy Cusack was driving into the icefield parking lot on Saturday afternoon when he saw a helicopter flying in and multiple emergency crews on scene.

“One of the snow tour buses was upside down and off the bank … to the left of the glacier, not on the actual glacier but just a side road,” he said. “It looked like it was kind of on the shoulder, slid and rolled down the embankment a couple of times … it’s horrible.”

The custom-designed sightseeing buses offer visitors the chance to walk on the glacier itself, driving from a visitor centre along the side of Highway 93, up the moraine — or the mass of rocks and debris left behind by a receding glacier — and onto the ice.

The Columbia Icefield is one of the largest non-polar icefields in the world, located about 100 kilometres south of Jasper.

Pursuit reopened its icefield tours about a month ago with 50 per cent capacity after being closed due to the pandemic.

When full, Pursuit said the buses can transport up to 56 passengers, including seated and standing room.

STARS confirmed three helicopters from Calgary, Edmonton and Grande Prairie responded to what a spokesperson described as a multiple casualty incident.

Police asked people to avoid the area as emergency responders cleared access to the rollover site, and said as the investigation was in its early stages updates would be provided as they became available.

Alberta Premier Jason Kenney said on Twitter he was saddened to hear of the rollover.

“Thanks to [STARS air ambulance], EMS, front-line health workers, and Parks Canada staff for their quick action and care in responding. Prayers for all involved in the incident,” he wrote.