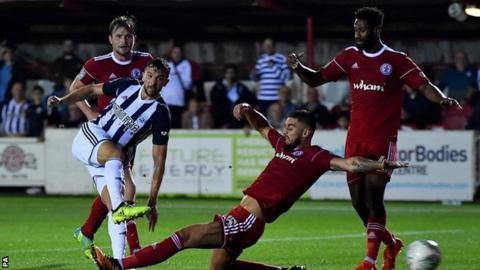 There were 274 changes made by teams across 19 matches in Tuesday’s second round EFL Cup ties – a trend described as “devaluing” the competition.

Crystal Palace and Brighton were among sides with grounds well below capacity.

“If the fans know their manager is not going to pick the strongest team then they don’t want to turn up,” said former Everton midfielder Leon Osman.

Osman attended Leicester’s win at Sheffield United for Radio 5 live, where 11,280 fans turned up in a stadium that has a capacity of 32,702.

He added on BBC Radio 5 live: “Tonight’s a top game against Premier League opposition but the supporters haven’t come. Maybe the changes devalue the competition in that way.”

There has also been criticism that the third-round draw for the competition is being held in Beijing, China on Thursday – at 04:15 BST.

Previous draws for this season’s competition have been beset by problems – including teams being drawn twice and confusion around home and away ties.

Osman praised manager Tony Pulis for only making four changes to his West Brom side, who have won both their games in the Premier League this season. The Baggies beat League Two team Accrington 3-1.

Premier League side Watford were the highest-profile casualties, losing 3-2 at Bristol City after making six changes to their starting side.

Aston Villa made 11 changes but beat an also entirely changed Wigan side 4-1, while Doncaster of League One beat a Hull side also completely changed from the weekend’s line-up.

Osman said: “These cup competitions offer a great opportunity and it’s good to see Tony Pulis taking it really seriously. Leicester made lots of changes but still put out a really strong outfit. The problem comes when you make changes and lose the game.”

Baggies boss Pulis said: “We’ve taken the competition seriously. It gives us a chance to get to Wembley. I’ve been fortunate to take Stoke there and it would be lovely to do that with West Brom.”

Having raised the risk of the competition feeling devalued, Osman conceded that it did allow players on the fringes of the first team to get some playing time.

“It’s an obvious opportunity for managers to give their squad a game,” he said. “These players are determined and desperate to show what they can do and possibly take it more seriously than those in the first team would do”.

Thomas Hollern: They are all squad players, the only thing disrespectful is calling them weak. They are in the squad and have the right to play.

Gavin Witt: Give Champions League places to FA Cup & EFL Cup winners rather than clubs happy to play for 4th – then see how seriously teams take the cups.

Simon Turner: Reality of the modern game – an opportunity to rest the regular first-teamers and give useful competitive playing time to others.

Richard Milbourne: It’s disrespectful to the players in a team’s squad, suggesting they’re not good enough to play.

Baggies fan in the US: Why risk injury to your best players? It also gives the youngsters a good run out.

Mike Walker: The problem with the League Cup is not the players changing but the continual name change!

Mark Farley: Why ask a club to name a squad at the start of season if they can’t utilise it? It’s good management.

Andrew Neil: Most of the ‘superstars’ probably started their club career as a starter in an EFL Cup game or similar. It helps develop talent.

What happened on the pitch?

Of the seven Premier League sides in action Watford were the only ones to fall, going down 3-2 at home to Championship side Bristol City – despite making only six changes compared to the visitors’ nine.

Newly promoted Brighton edged past League Two’s Barnet 1-0, while Bournemouth came from behind to win 2-1 at Birmingham and Crystal Palace won by the same scoreline against an Ipswich side with an average age of under 20.

There were no such problems for 2015-16 Premier League champions Leicester, who triumphed 4-1 at Sheffield United, a result matched by Swansea against MK Dons, while a strong West Brom line-up were too strong for fourth-tier Accrington, winning 3-1 at the Crown Ground.

One of the shocks of the evening came at Craven Cottage where Championship side Fulham were beaten 1-0 by League One’s Bristol Rovers, with Ellis Harrison scoring the winner.

Kemar Roofe hit a hat-trick for Leeds in their 5-1 win over Newport County and Aston Villa found the net four times for the second successive game, beating Wigan 4-1.

Burton overcame Cardiff 2-1 to inflict the first defeat of the season on the Championship leaders, while both Bolton boss Phil Parkinson and Sheffield Wednesday manager Carlos Carvalhal were sent off during Wanderers’ 3-2 win.