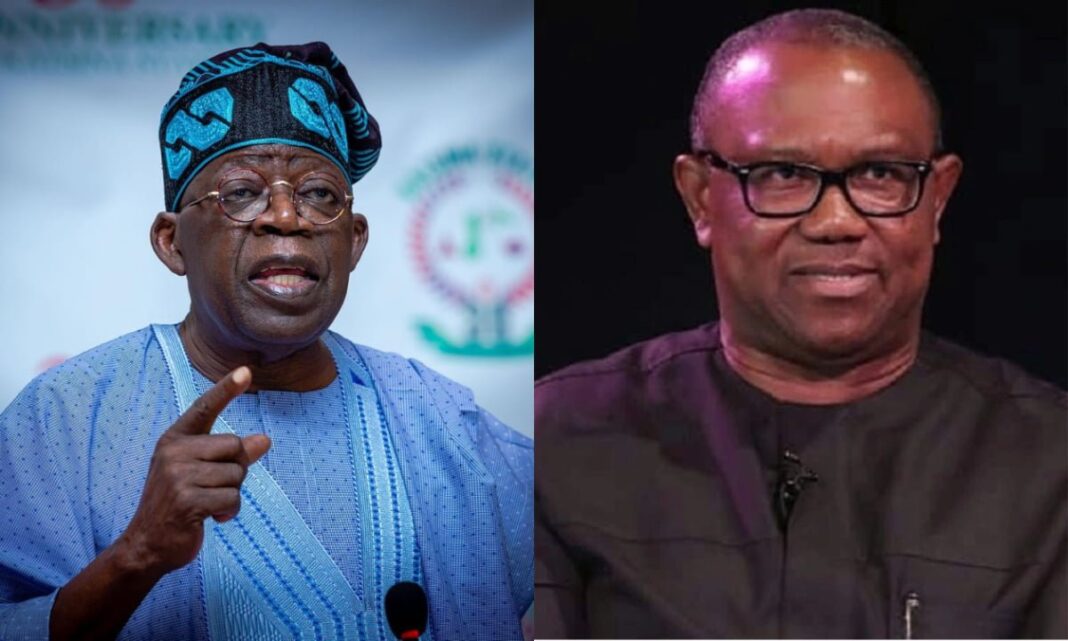 As the 2023 presidential elections draw near, the Southern part of the country seems to have been divided over Bola Ahmed Tinubu and Mr Peter Obi’s candidacy.

In the last few weeks, Obi’s supporters, popularly known as ‘Obidients’ have been holding solidarity rallies themed: ‘one-million-march’ across the country. This week, Tinubu’s supporters also staged a similar rally in Ibadan, the Oyo State capital.

Although the presidential campaign is yet to kick-off officially, the battle to succeed President Muhammadu Buhari in 2023 has plunged Peter Obi of the Labour Party and the All Progressives Congress, APC, flagbearer, Bola Asiwaju Tinubu’s camp into verbal war.

Recall that in a viral video, the former Anambra Governor had during a parley alleged that he received a WhatsApp message from “Tinubu group” asking the Yoruba to ignore the Labour Party in the forthcoming presidential election.

According to Obi, the WhatsApp message reads, “Yoruba shine your eyes o, if you vote for Peter Obi, it is automatically voting for seaports in south-south and south-east.

“The Igbos will stop coming to Lagos State to invest, rather they will go to Delta and Rivers States, they may even stop building houses in Lagos. It will affect a lot of Yorubas.”

Reacting to the viral video, the spokesperson for the APC Campaign Council, Festus Keyamo had alleged in a statement that Obi concocted the WhatsApp message to be seen as a victim of ethnic agenda.

Keyamo debunked Obi’s claim saying the group the Labour Party candidate referred to does not exist, adding that Obi lacked ideas on how to tackle the country’s challenges.

In a separate statement issued on September 13, Keyamo who is also the Minister of State for Employment and Labour, alleged that Peter Obi was planning to stage-manage an assassination attempt on himself.

Keyamo’s allegations triggered backlash from many individuals and groups, particularly from the South-South and South-East, calling on security agencies to arrest the APC campaign spokesman.

Recall that a rights group, Advocate for Peoples’ Rights and Justice on Thursday petitioned the Inspector-General of Police, Usman Baba, to invite Keyamo over the assassination comment.

DAILY POST also recalls that the Human Rights Writers Association of Nigeria, HURIWA, while reacting to Keyamo’s allegation, called the attention of the APC presidential candidate, Bola Ahmed Tinubu, warning that any attempt to attack Obi may amount to war.

This is coming amid persistent clashes between supporters of Obi and that of the former Lagos Governor, Asiwaju on social media.

Speaking with DAILY POST yesterday, Goodluck Ibem, the President General of the Coalition of Southern and Middle Belt Youth Leaders, COSMBYLA, said all efforts by those bringing division to the region would yield no fruit.

According to him, Nigerians are not confused on who is capable of bringing the long agitated good governance to the people, saying those playing regional politics may be disgraced in 2023.

He said, “The youths and the entire Nigerians know what they want. No politician can succeed in dividing them now. It is too late. Nigerians want someone who is competent and not corrupt. A person who can deliver on his mandate.

“Gone are the days when people vote because of region or religion. The South is united to vote for a good candidate come 2023”.

Meanwhile, the crisis rocking the Peoples Democratic Party, PDP took another turn on Wednesday when Governor Seyi Makinde of Oyo State and other party stakeholders in the South-west joined forces with Nyesom Wike of Rivers State, calling for the resignation of the party Chairman, Iyorchia Ayu.

Governor Makinde, who made the call when the presidential candidate of the party, Abubakar Atiku met with some stakeholders of the PDP in the South-West, insisted that for peace to return to the party, Ayu must step down.

Recall that Governor Wike and his loyalists who are angry over the outcome of the party’s primary election and the selection of Atiku’s running mate, had vowed that until their demands are met, they would ensure that the party fails the presidential election.

However, Ayu, who insisted that he was duly elected and must complete his tenure, had jetted out of the country for a medical trip to Europe amid the crisis.

Speaking with DAILY POST, the PDP, head of New Media Anthony Ehilebo said the party is focused on winning the 2023 presidential election, saying the call for Ayu’s removal was a distraction.

According to him, some of the aggrieved members who are fueling the crisis had also deprived him of contesting for the PDP national publicity secretary.

“These same individuals that are shouting deprived me of contesting for the national publicity secretary. I did not destroy the party because of that.

“They have benefited far more than me or any other person in the party. Why do they now want to destroy the party after they have achieved the apex of their career?”